Subscribe
MARKET ANALYSIS Turkish status quo as iron ore climbs Sharp price movements returned in May, June and July with switch- backs of US$ 20 not uncommon. Cargo rates to Turkey for HMS I/II 80/20 for the period under review ended roughly w...
Read the entire page 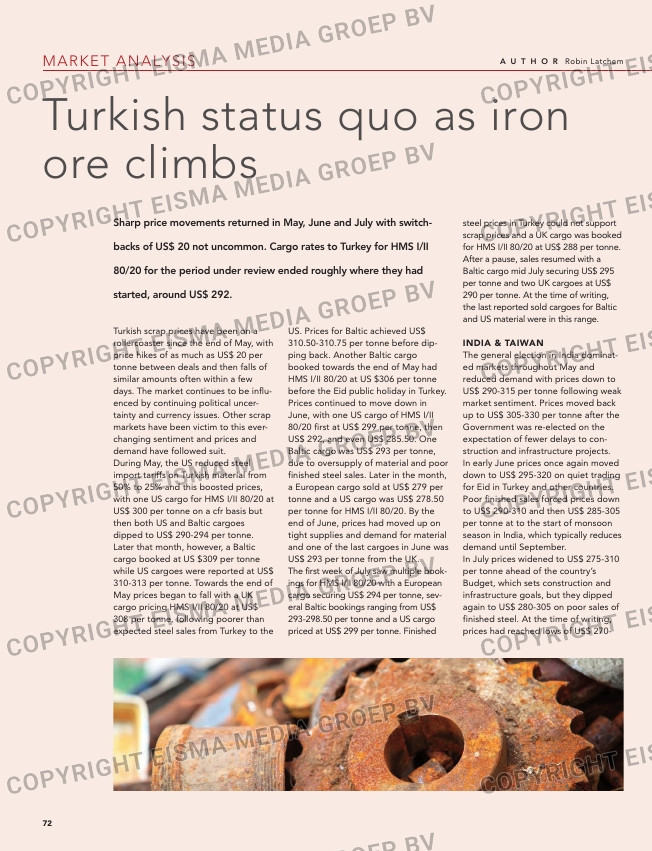 Sharp price movements returned in May, June and July with switch-

backs of US$ 20 not uncommon. Cargo rates to Turkey for HMS I/II

Turkish scrap prices have been on a
rollercoaster since the end of May, with
price hikes of as much as US$ 20 per
tonne between deals and then falls of
similar amounts often within a few
days. The market continues to be influ-
enced by continuing political uncer-
tainty and currency issues. Other scrap
markets have been victim to this ever-
changing sentiment and prices and
demand have followed suit.
During May, the US reduced steel
import tariffs on Turkish material from
50% to 25% and this boosted prices,
with one US cargo for HMS I/II 80/20 at
US$ 300 per tonne on a cfr basis but
then both US and Baltic cargoes
dipped to US$ 290-294 per tonne.
Later that month, however, a Baltic
cargo booked at US $309 per tonne
while US cargoes were reported at US$
310-313 per tonne. Towards the end of
May prices began to fall with a UK
cargo pricing HMS I/II 80/20 at US$
308 per tonne, following poorer than
expected steel sales from Turkey to the

steel prices in Turkey could not support
scrap prices and a UK cargo was booked
for HMS I/II 80/20 at US$ 288 per tonne.
After a pause, sales resumed with a
Baltic cargo mid July securing US$ 295
per tonne and two UK cargoes at US$
290 per tonne. At the time of writing,
the last reported sold cargoes for Baltic
and US material were in this range.

INDIA & TAIWAN
The general election in India dominat-
ed markets throughout May and
reduced demand with prices down to
US$ 290-315 per tonne following weak
market sentiment. Prices moved back
up to US$ 305-330 per tonne after the
Government was re-elected on the
expectation of fewer delays to con-
struction and infrastructure projects.
In early June prices once again moved
down to US$ 295-320 on quiet trading
for Eid in Turkey and other countries.
Poor finished sales forced prices down
to US$ 290-310 and then US$ 285-305
per tonne at to the start of monsoon
season in India, which typically reduces
demand until September.
In July prices widened to US$ 275-310
per tonne ahead of the country’s
Budget, which sets construction and
infrastructure goals, but they dipped
again to US$ 280-305 on poor sales of
finished steel. At the time of writing,
prices had reached lows of US$ 270-