Subscribe
A U T H O R Kirstin Linnenkoper 68 ‘Solving the plastic waste problem is not science fiction’ Piano keys, ping-pong balls and guitar plectrums. What do these three have in common? They’re made of plastic. UK materials scientist...
Read the entire page 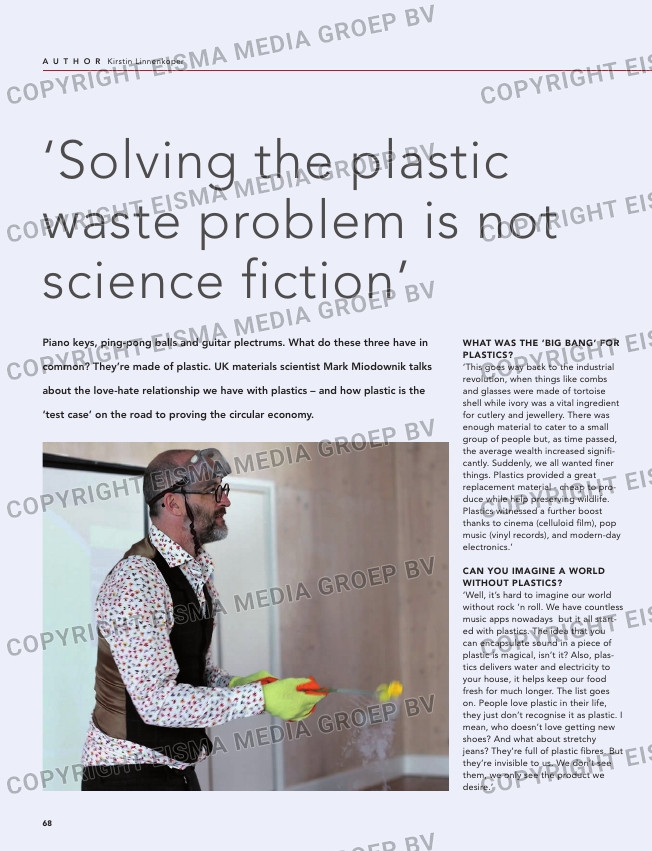 ‘Solving the plastic
waste problem is not
science fiction’
Piano keys, ping-pong balls and guitar plectrums. What do these three have in

‘test case’ on the road to proving the circular economy.

WORLDWIDE PRODUCTION OF
PLASTICS EXCEEDS 400 MILLION
TONNES PER YEAR WHILE
PLASTIC WASTE IS RAPIDLY
INCREASING. THOUGHTS?
‘The material we fell in love with…
we’ve been unable to control. We’re
stuck in a loop of buying things and
throwing them away. There’s no sense
of ownership or appreciation. This
attitude has basically spoiled our rela-
tionship with plastics. Then again, we
have a very complicated relationship
with plastics. On one hand, we rely on
it and, on the other, we are being told
every single day how bad it is and we
should feel guilty and ashamed for
buying it. The problem with the anti-
plastics lobby is it puts people in an
impossible situation. As a result, they
will start ignoring the message and
stop engaging. Compare this to those
who are addicted to their phone. Tell
them to take a break and they’ll be
really reluctant to do that. Pointing
out a negative doesn’t lead to positive
behaviour.’

HOW DO WE SOLVE THE WASTE
PROBLEM?
‘Plastic isn’t the root of our problem.
We may be talking about waste a lot
nowadays but it’s part of a much larg-
er issue. Consumption – and an unsus-
tainable market pushed purely by eco-
nomics. Producers and politicians all
play along. Look at it this way: plastic
waste happens to be a very physical
sign that our current system is flawed.
But it is only one of the symptoms. In
a way, plastic is the “fall guy” of an
unsustainable industry.’

IF THE SYSTEM IS BROKEN, HOW
DO WE FIX IT?
‘Simply reducing plastics isn’t the
answer. It’s not about producing less
plastic, it’s about producing better
materials. Ideally, everything that is
manufactured should be recyclable
and, better yet, contain a high quanti-
ty of recycled content. Around 75% of
the UK’s plastic bottles are recycled,
according to the British Plastics
Federation. Personally, I would be

WHAT WAS THE ‘BIG BANG’ FOR
PLASTICS?
‘This goes way back to the industrial
revolution, when things like combs
and glasses were made of tortoise
shell while ivory was a vital ingredient
for cutlery and jewellery. There was
enough material to cater to a small
group of people but, as time passed,
the average wealth increased signifi-
cantly. Suddenly, we all wanted finer
things. Plastics provided a great
replacement material – cheap to pro-
duce while help preserving wildlife.
Plastics witnessed a further boost
thanks to cinema (celluloid film), pop
music (vinyl records), and modern-day
electronics.’

CAN YOU IMAGINE A WORLD
WITHOUT PLASTICS?
‘Well, it’s hard to imagine our world
without rock ‘n roll. We have countless
music apps nowadays but it all start-
ed with plastics. The idea that you
can encapsulate sound in a piece of
plastic is magical, isn’t it? Also, plas-
tics delivers water and electricity to
your house, it helps keep our food
fresh for much longer. The list goes
on. People love plastic in their life,
they just don’t recognise it as plastic. I
mean, who doesn’t love getting new
shoes? And what about stretchy
jeans? They’re full of plastic fibres. But
they’re invisible to us. We don’t see
them, we only see the product we
desire.’