Subscribe
A U T H O R Kirstin Linnenkoper 66 Tomra takes sorting tech to Bulgaria More than 52% of plastic scrap is recycled in Bulgaria. With the average EU recy- cling rate being only 42%, this makes the country one of the top European per- f...
Read the entire page 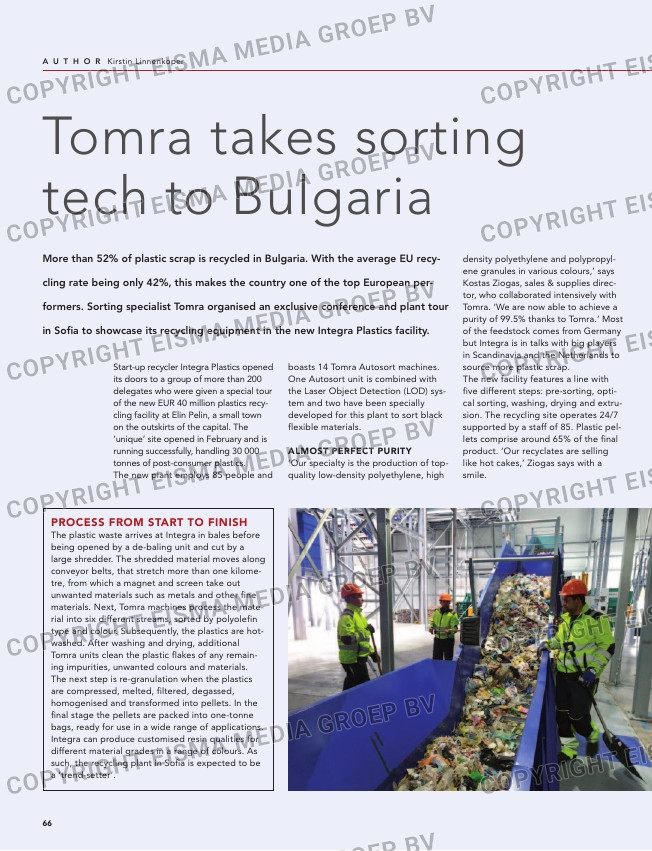 Tomra takes sorting
tech to Bulgaria
More than 52% of plastic scrap is recycled in Bulgaria. With the average EU recy-

cling rate being only 42%, this makes the country one of the top European per-

in Sofia to showcase its recycling equipment in the new Integra Plastics facility.

Start-up recycler Integra Plastics opened
its doors to a group of more than 200
delegates who were given a special tour
of the new EUR 40 million plastics recy-
cling facility at Elin Pelin, a small town
on the outskirts of the capital. The
‘unique’ site opened in February and is
running successfully, handling 30 000
tonnes of post-consumer plastics.
The new plant employs 85 people and

boasts 14 Tomra Autosort machines.
One Autosort unit is combined with
the Laser Object Detection (LOD) sys-
tem and two have been specially
developed for this plant to sort black
flexible materials.

density polyethylene and polypropyl-
ene granules in various colours,’ says
Kostas Ziogas, sales & supplies direc-
tor, who collaborated intensively with
Tomra. ‘We are now able to achieve a
purity of 99.5% thanks to Tomra.’ Most
of the feedstock comes from Germany
but Integra is in talks with big players
in Scandinavia and the Netherlands to
source more plastic scrap.
The new facility features a line with
five different steps: pre-sorting, opti-
cal sorting, washing, drying and extru-
sion. The recycling site operates 24/7
supported by a staff of 85. Plastic pel-
lets comprise around 65% of the final
product. ‘Our recyclates are selling
like hot cakes,’ Ziogas says with a
smile.

PROCESS FROM START TO FINISH
The plastic waste arrives at Integra in bales before
being opened by a de-baling unit and cut by a
large shredder. The shredded material moves along
conveyor belts, that stretch more than one kilome-
tre, from which a magnet and screen take out
unwanted materials such as metals and other fine
materials. Next, Tomra machines process the mate-
rial into six different streams, sorted by polyolefin
type and colour. Subsequently, the plastics are hot-
washed. After washing and drying, additional
Tomra units clean the plastic flakes of any remain-
ing impurities, unwanted colours and materials.
The next step is re-granulation when the plastics
are compressed, melted, filtered, degassed,
homogenised and transformed into pellets. In the
final stage the pellets are packed into one-tonne
bags, ready for use in a wide range of applications.
Integra can produce customised resin qualities for
different material grades in a range of colours. As
such, the recycling plant in Sofia is expected to be
a ‘trend-setter’.