Subscribe
A U T H O R Martijn Reintjes 6 ‘Millions of Euros saved for the industry’ E u R I C ’s E m m a n u e l K a t r a k i s : ‘More and more will be asked from recyclers, be it in terms of quality, market resil- ience or adminis...
Read the entire page 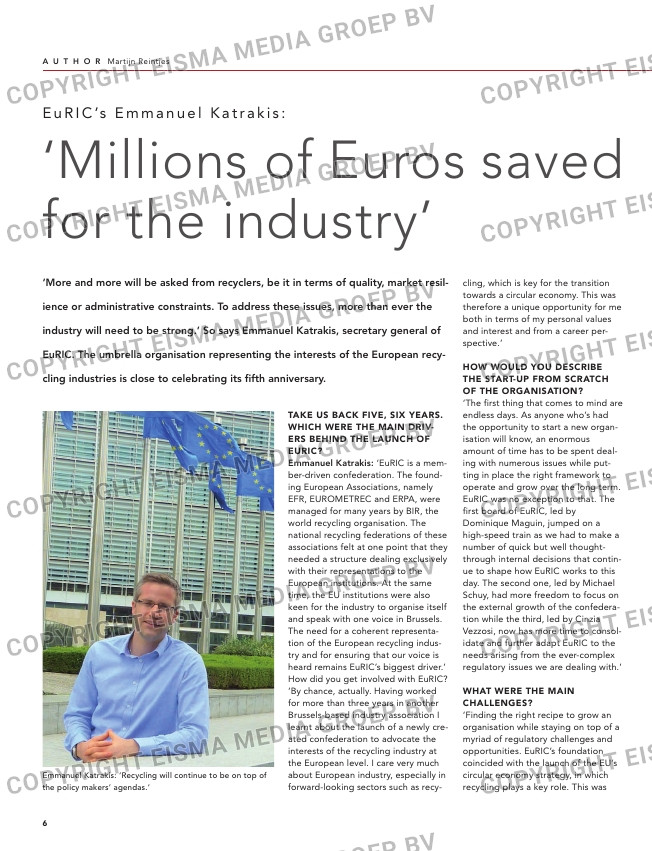 ‘Millions of Euros saved
for the industry’

‘More and more will be asked from recyclers, be it in terms of quality, market resil-

ience or administrative constraints. To address these issues, more than ever the

industry will need to be strong.’ So says Emmanuel Katrakis, secretary general of

EuRIC. The umbrella organisation representing the interests of the European recy-

cling industries is close to celebrating its fifth anniversary.

actually a blessing as the input of
recyclers was very much welcomed by
EU policy-makers who put recycling at
the top of their priorities.
Another challenge was to quickly
build a solid network around EuRIC’s
membership to advocate recyclers’
position in Brussels and the capitals of
each Member State. I am immensely
grateful to our members as we have
been very effective in building such a
network.’

PLASTICS HAVE BEEN HIGH ON
THE AGENDA, MAINLY CAUSED
BY ASIA’S IMPORT RESTRIC-
TIONS. IS THIS WHY EURIC IN
2018 LAUNCHED A PLASTICS
DIVISION?
‘Plastics are indeed making the head-
lines today but Asia’s import restric-
tions were actually not the main driver
for launching the European Plastics
Recycling Branch (EPRB). Regulatory
developments, some of which put
state-of-the-art plastics recycling
activities at risk, have steadily
increased over the last three years and
were taking a significant share of our
work. So we felt it was urgent to cre-
ate a new branch dealing solely with
plastics recycling. One of our major
achievements, definitely, is the inclu-
sion of mandatory recycled content
targets in the Single-Use Plastics
Directive. It took a lot of joint advoca-
cy efforts to explain the time had
come not only to look at how to
improve collection and recycling but
also to resolutely push demand for
recycled plastics in packaging bever-
ages placed on the market.’

THERE ARE RECYCLERS WHO SEE
EURIC AS A SERIOUS COMPETI-
TOR TO BIR. DO YOU AGREE?
‘EuRIC and BIR both play important
roles but different ones. EuRIC repre-
sents the interests of European recy-
clers. Advocating the interests of an
industry before European institutions
is a full-time job, which requires spe-
cific and in-depth knowledge of EU
decision-making and a team of profes-

TAKE US BACK FIVE, SIX YEARS.
WHICH WERE THE MAIN DRIV-
ERS BEHIND THE LAUNCH OF
EURIC?
Emmanuel Katrakis: ‘EuRIC is a mem-
ber-driven confederation. The found-
ing European Associations, namely
EFR, EUROMETREC and ERPA, were
managed for many years by BIR, the
world recycling organisation. The
national recycling federations of these
associations felt at one point that they
needed a structure dealing exclusively
with their representations to the
European institutions. At the same
time, the EU institutions were also
keen for the industry to organise itself
and speak with one voice in Brussels.
The need for a coherent representa-
tion of the European recycling indus-
try and for ensuring that our voice is
heard remains EuRIC’s biggest driver.’
How did you get involved with EuRIC?
‘By chance, actually. Having worked
for more than three years in another
Brussels-based industry association I
learnt about the launch of a newly cre-
ated confederation to advocate the
interests of the recycling industry at
the European level. I care very much
about European industry, especially in
forward-looking sectors such as recy-

cling, which is key for the transition
towards a circular economy. This was
therefore a unique opportunity for me
both in terms of my personal values
and interest and from a career per-
spective.’

HOW WOULD YOU DESCRIBE
THE START-UP FROM SCRATCH
OF THE ORGANISATION?
‘The first thing that comes to mind are
endless days. As anyone who’s had
the opportunity to start a new organ-
isation will know, an enormous
amount of time has to be spent deal-
ing with numerous issues while put-
ting in place the right framework to
operate and grow over the long term.
EuRIC was no exception to that. The
first board of EuRIC, led by
Dominique Maguin, jumped on a
high-speed train as we had to make a
number of quick but well thought-
through internal decisions that contin-
ue to shape how EuRIC works to this
day. The second one, led by Michael
Schuy, had more freedom to focus on
the external growth of the confedera-
tion while the third, led by Cinzia
Vezzosi, now has more time to consol-
idate and further adapt EuRIC to the
needs arising from the ever-complex
regulatory issues we are dealing with.’

WHAT WERE THE MAIN
CHALLENGES?
‘Finding the right recipe to grow an
organisation while staying on top of a
myriad of regulatory challenges and
opportunities. EuRIC’s foundation
coincided with the launch of the EU’s
circular economy strategy, in which
recycling plays a key role. This was

Emmanuel Katrakis: ‘Recycling will continue to be on top of
the policy makers’ agendas.’