Subscribe
PLASTICS SPECIAL 59recyclinginternational.com | July/August | 2019 A 28 000 m2 state-of-the-art facility, rPlanet Earth is considered to be a major boost for plastics recycling capacity in Southern California. ‘In a nutshell, wh...
Read the entire page 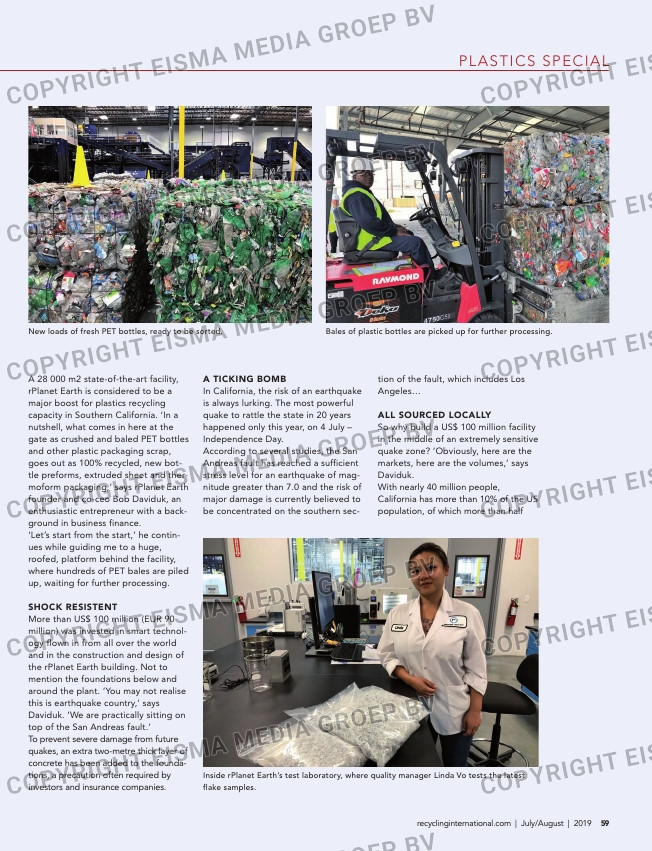 A 28 000 m2 state-of-the-art facility,
rPlanet Earth is considered to be a
major boost for plastics recycling
capacity in Southern California. ‘In a
nutshell, what comes in here at the
gate as crushed and baled PET bottles
and other plastic packaging scrap,
goes out as 100% recycled, new bot-
tle preforms, extruded sheet and ther-
moform packaging,’ says rPlanet Earth
founder and co-ceo Bob Daviduk, an
enthusiastic entrepreneur with a back-
ground in business finance.
‘Let’s start from the start,’ he contin-
ues while guiding me to a huge,
roofed, platform behind the facility,
where hundreds of PET bales are piled
up, waiting for further processing.

SHOCK RESISTENT
More than US$ 100 million (EUR 90
million) was invested in smart technol-
ogy flown in from all over the world
and in the construction and design of
the rPlanet Earth building. Not to
mention the foundations below and
around the plant. ‘You may not realise
this is earthquake country,’ says
Daviduk. ‘We are practically sitting on
top of the San Andreas fault.’
To prevent severe damage from future
quakes, an extra two-metre thick layer of
concrete has been added to the founda-
tions, a precaution often required by
investors and insurance companies.

A TICKING BOMB
In California, the risk of an earthquake
is always lurking. The most powerful
quake to rattle the state in 20 years
happened only this year, on 4 July –
Independence Day.
According to several studies, the San
Andreas fault has reached a sufficient
stress level for an earthquake of mag-
nitude greater than 7.0 and the risk of
major damage is currently believed to
be concentrated on the southern sec-

tion of the fault, which includes Los
Angeles…

ALL SOURCED LOCALLY
So why build a US$ 100 million facility
in the middle of an extremely sensitive
quake zone? ‘Obviously, here are the
markets, here are the volumes,’ says
Daviduk.
With nearly 40 million people,
California has more than 10% of the US
population, of which more than half

Bales of plastic bottles are picked up for further processing.

New loads of fresh PET bottles, ready to be sorted.