Subscribe
A U T H O R Kirstin Linnenkoper 54 Plastic waste may fuel jets of the future Scientists at Washington State University in the US have found a new way to recycle plastic waste products into valuable fuel for aircraft. Common types o...
Read the entire page 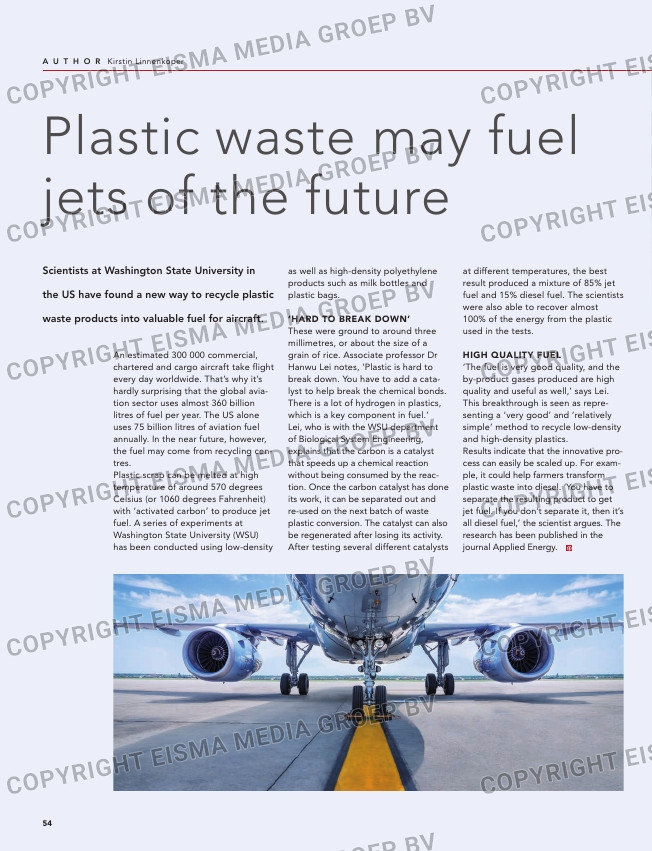 the US have found a new way to recycle plastic

Common types of plastic packaging can be recycled into electric

wires and cables, new research by the UK’s Swansea University has

proven. This application could significantly reduce the volume of

plastic waste in the near future.

An estimated 300 000 commercial,
chartered and cargo aircraft take flight
every day worldwide. That’s why it’s
hardly surprising that the global avia-
tion sector uses almost 360 billion
litres of fuel per year. The US alone
uses 75 billion litres of aviation fuel
annually. In the near future, however,
the fuel may come from recycling cen-
tres.
Plastic scrap can be melted at high
temperature of around 570 degrees
Celsius (or 1060 degrees Fahrenheit)
with ‘activated carbon’ to produce jet
fuel. A series of experiments at
Washington State University (WSU)
has been conducted using low-density

as well as high-density polyethylene
products such as milk bottles and
plastic bags.

‘HARD TO BREAK DOWN’
These were ground to around three
millimetres, or about the size of a
grain of rice. Associate professor Dr
Hanwu Lei notes, ‘Plastic is hard to
break down. You have to add a cata-
lyst to help break the chemical bonds.
There is a lot of hydrogen in plastics,
which is a key component in fuel.’
Lei, who is with the WSU department
of Biological System Engineering,
explains that the carbon is a catalyst
that speeds up a chemical reaction
without being consumed by the reac-
tion. Once the carbon catalyst has done
its work, it can be separated out and
re-used on the next batch of waste
plastic conversion. The catalyst can also
be regenerated after losing its activity.
After testing several different catalysts

at different temperatures, the best
result produced a mixture of 85% jet
fuel and 15% diesel fuel. The scientists
were also able to recover almost
100% of the energy from the plastic
used in the tests.

HIGH QUALITY FUEL
‘The fuel is very good quality, and the
by-product gases produced are high
quality and useful as well,’ says Lei.
This breakthrough is seen as repre-
senting a ‘very good’ and ‘relatively
simple’ method to recycle low-density
and high-density plastics.
Results indicate that the innovative pro-
cess can easily be scaled up. For exam-
ple, it could help farmers transform
plastic waste into diesel. ‘You have to
separate the resulting product to get
jet fuel. If you don’t separate it, then it’s
all diesel fuel,’ the scientist argues. The
research has been published in the
journal Applied Energy.