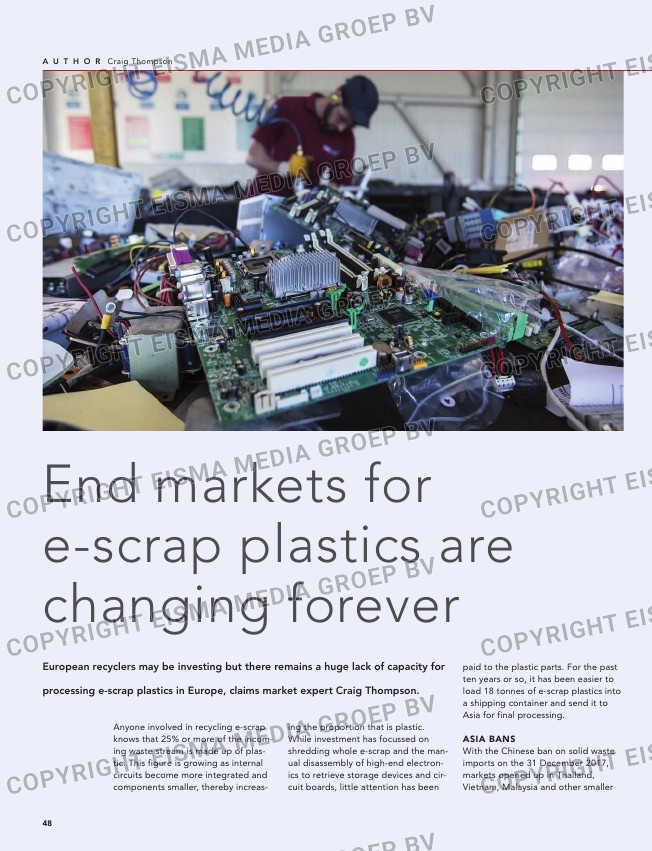 Asian countries to process e-scrap
plastics. But within six months, some
of these countries had banned such
imports leaving Malaysia as the only
significant end market in Asia –
although the Malaysian government
has also announced severe restric-
tions.
Exports to Malaysia will cease entirely
on 1 January 2021 when the Basel
coding changes are implemented,
banning the export of solid wastes
including plastics to non-OECD coun-
tries such as Malaysia. Effectively, this
will happen by August 2020 because
containers will have be at sea by then
to avoid the ban. This means export-
ers have less than 12 months to find a
sustainable, permitted and auditable
solution for their e-scrap plastics.

FURTHER RESTRICTIONS
Further changes are on the horizon.
The United Kingdom has become one
of the first countries to ban the export
of e-scrap plastics containing hazard-
ous materials such as brominated
flame retardants (BFR) or persistent
organic pollutants (POPs). E-scrap
plastics from the UK will only be able
to be moved as red list hazardous
materials under the International
Waste Shipment Transfrontier
Shipment Regulations to OECD coun-
tries, meaning Malaysia and others
will be excluded.
Other European countries are likely to
follow suit, given the well-document-
ed hazards in e-scrap plastics, before
the Basel convention coding changes
in January 2021.

AROUND THE GLOBE
Canada and the US regulators often
look at the EU Waste Electrical and
Electronic Equipment (WEEE) regula-
tions with a view to following or
adopting elements of the regulations
so it is only a matter of time before
these regulations are implemented in
global e-scrap recycling markets.

Anyone involved in recycling e-scrap
knows that 25% or more of the incom-
ing waste stream is made up of plas-
tic. This figure is growing as internal
circuits become more integrated and
components smaller, thereby increas-

ing the proportion that is plastic.
While investment has focussed on
shredding whole e-scrap and the man-
ual disassembly of high-end electron-
ics to retrieve storage devices and cir-
cuit boards, little attention has been

paid to the plastic parts. For the past
ten years or so, it has been easier to
load 18 tonnes of e-scrap plastics into
a shipping container and send it to
Asia for final processing.

ASIA BANS
With the Chinese ban on solid waste
imports on the 31 December 2017,
markets opened up in Thailand,
Vietnam, Malaysia and other smaller