Subscribe
PLASTICS SPECIAL 47recyclinginternational.com | July/August | 2019 ARE THERE ANY CONCRETE PLANS TO INVEST IN A RECY- CLING VENTURE? ‘There were big plans – and still are. Back in 2017, the government was seriously considering f...
Read the entire page 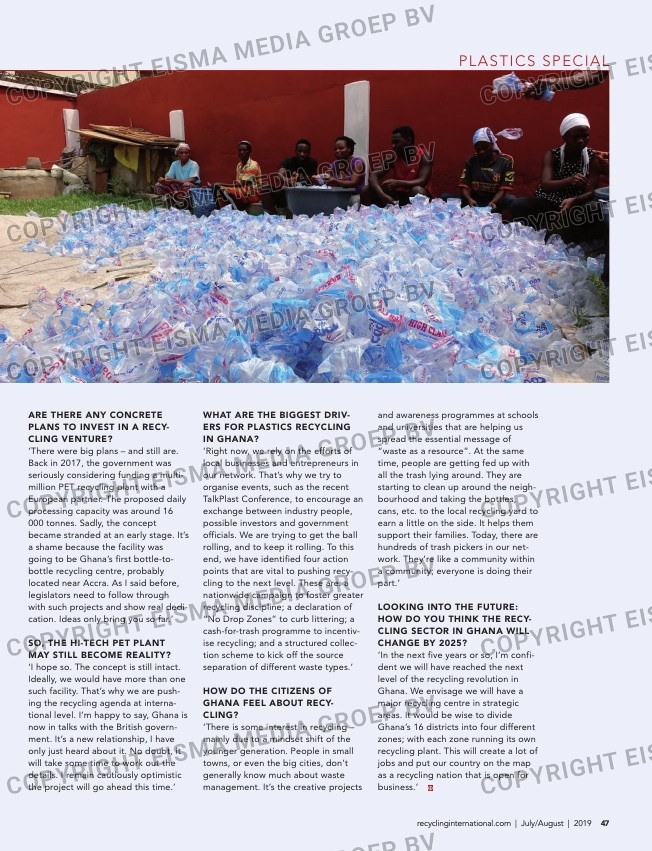 ARE THERE ANY CONCRETE
PLANS TO INVEST IN A RECY-
CLING VENTURE?
‘There were big plans – and still are.
Back in 2017, the government was
seriously considering funding a multi-
million PET recycling plant with a
European partner. The proposed daily
processing capacity was around 16
000 tonnes. Sadly, the concept
became stranded at an early stage. It’s
a shame because the facility was
going to be Ghana’s first bottle-to-
bottle recycling centre, probably
located near Accra. As I said before,
legislators need to follow through
with such projects and show real dedi-
cation. Ideas only bring you so far.’

SO, THE HI-TECH PET PLANT
MAY STILL BECOME REALITY?
‘I hope so. The concept is still intact.
Ideally, we would have more than one
such facility. That’s why we are push-
ing the recycling agenda at interna-
tional level. I’m happy to say, Ghana is
now in talks with the British govern-
ment. It’s a new relationship, I have
only just heard about it. No doubt, it
will take some time to work out the
details. I remain cautiously optimistic
the project will go ahead this time.’

WHAT ARE THE BIGGEST DRIV-
ERS FOR PLASTICS RECYCLING
IN GHANA?
‘Right now, we rely on the efforts of
local businesses and entrepreneurs in
our network. That’s why we try to
organise events, such as the recent
TalkPlast Conference, to encourage an
exchange between industry people,
possible investors and government
officials. We are trying to get the ball
rolling, and to keep it rolling. To this
end, we have identified four action
points that are vital to pushing recy-
cling to the next level. These are: a
nationwide campaign to foster greater
recycling discipline; a declaration of
“No Drop Zones” to curb littering; a
cash-for-trash programme to incentiv-
ise recycling; and a structured collec-
tion scheme to kick off the source
separation of different waste types.’

HOW DO THE CITIZENS OF
GHANA FEEL ABOUT RECY-
CLING?
‘There is some interest in recycling –
mainly due to a mindset shift of the
younger generation. People in small
towns, or even the big cities, don’t
generally know much about waste
management. It’s the creative projects

and awareness programmes at schools
and universities that are helping us
spread the essential message of
“waste as a resource”. At the same
time, people are getting fed up with
all the trash lying around. They are
starting to clean up around the neigh-
bourhood and taking the bottles,
cans, etc. to the local recycling yard to
earn a little on the side. It helps them
support their families. Today, there are
hundreds of trash pickers in our net-
work. They’re like a community within
a community; everyone is doing their
part.’

LOOKING INTO THE FUTURE:
HOW DO YOU THINK THE RECY-
CLING SECTOR IN GHANA WILL
CHANGE BY 2025?
‘In the next five years or so, I’m confi-
dent we will have reached the next
level of the recycling revolution in
Ghana. We envisage we will have a
major recycling centre in strategic
areas. It would be wise to divide
Ghana’s 16 districts into four different
zones; with each zone running its own
recycling plant. This will create a lot of
jobs and put our country on the map
as a recycling nation that is open for
business.’