Subscribe
A U T H O R Surendra Borad Patawari 44 How drastic decisions have shaped the plastics industry Not long ago, the international trade in plastics scrap used to be in the region of about 15 million tonnes annually. Now, it is reduced to...
Read the entire page 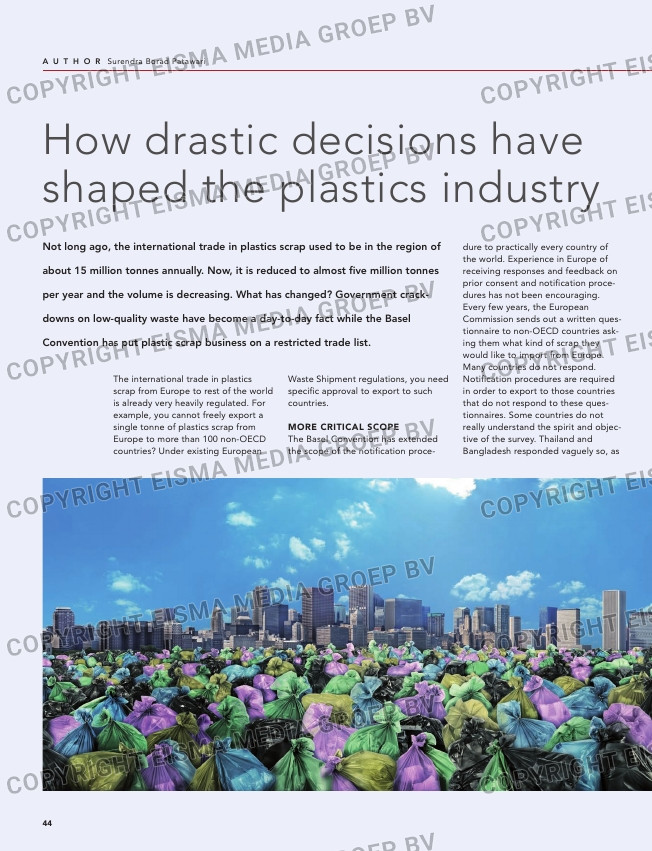 How drastic decisions have
shaped the plastics industry
Not long ago, the international trade in plastics scrap used to be in the region of

per year and the volume is decreasing. What has changed? Government crack-

a result, it is not possible to export
plastics scrap from Europe to Thailand
and Bangladesh despite the fact
they have a reprocessing industry and
are importing plastic scrap from the
US.
What does this mean? Recycling will
move more towards the developed
world while developing countries will
not have access to plastic scrap. The
process of prior consents is too com-
plicated, involving as it does bank
guarantees, transportation details
ahead of transit and warehouse infor-
mation.

ECONOMY OF SCALE
Overall, I doubt the decision is based
on hard facts. It is the public, the
media and the politicians who have
driven it. Clearly, it will lead to further
reductions in international trade. For
many developing countries it will be
very difficult to import scrap based on
prior consents because you need a
minimum level of production for econ-
omy of scale.

The international trade in plastics
scrap from Europe to rest of the world
is already very heavily regulated. For
example, you cannot freely export a
single tonne of plastics scrap from
Europe to more than 100 non-OECD
countries? Under existing European

Waste Shipment regulations, you need
specific approval to export to such
countries.

dure to practically every country of
the world. Experience in Europe of
receiving responses and feedback on
prior consent and notification proce-
dures has not been encouraging.
Every few years, the European
Commission sends out a written ques-
tionnaire to non-OECD countries ask-
ing them what kind of scrap they
would like to import from Europe.
Many countries do not respond.
Notification procedures are required
in order to export to those countries
that do not respond to these ques-
tionnaires. Some countries do not
really understand the spirit and objec-
tive of the survey. Thailand and
Bangladesh responded vaguely so, as