Subscribe
BUSINESS 31recyclinginternational.com | July/August | 2019 NO MORE FRIDGE MOUNTAINS The disposal of a fridge reaching its end-of-life has long been a challenge. Before the days of producer responsi- bility, the economics of recyclin...
Read the entire page 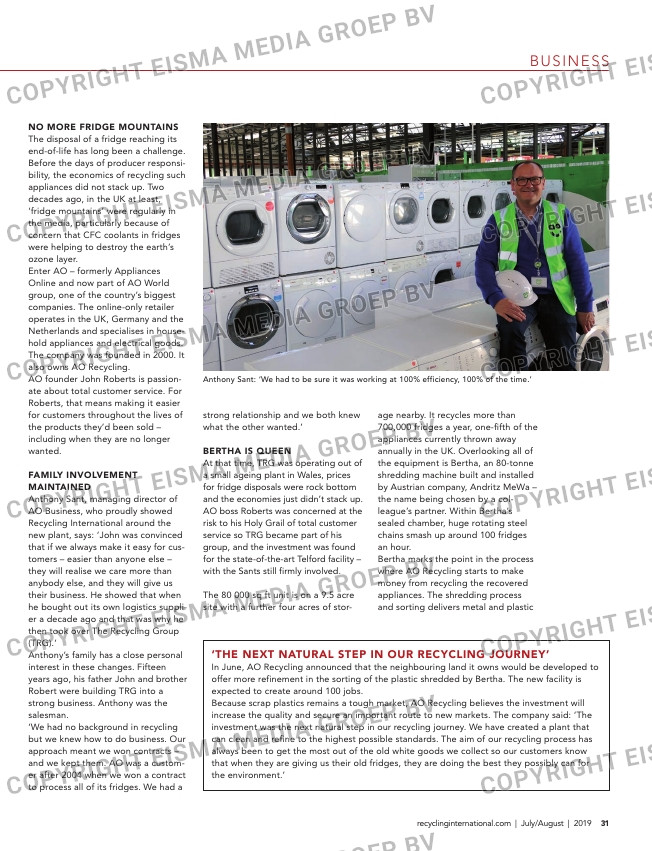 NO MORE FRIDGE MOUNTAINS
The disposal of a fridge reaching its
end-of-life has long been a challenge.
Before the days of producer responsi-
bility, the economics of recycling such
appliances did not stack up. Two
decades ago, in the UK at least,
‘fridge mountains’ were regularly in
the media, particularly because of
concern that CFC coolants in fridges
were helping to destroy the earth’s
ozone layer.
Enter AO – formerly Appliances
Online and now part of AO World
group, one of the country’s biggest
companies. The online-only retailer
operates in the UK, Germany and the
Netherlands and specialises in house-
hold appliances and electrical goods.
The company was founded in 2000. It
also owns AO Recycling.
AO founder John Roberts is passion-
ate about total customer service. For
Roberts, that means making it easier
for customers throughout the lives of
the products they’d been sold –
including when they are no longer
wanted.

FAMILY INVOLVEMENT
MAINTAINED
Anthony Sant, managing director of
AO Business, who proudly showed
Recycling International around the
new plant, says: ‘John was convinced
that if we always make it easy for cus-
tomers – easier than anyone else –
they will realise we care more than
anybody else, and they will give us
their business. He showed that when
he bought out its own logistics suppli-
er a decade ago and that was why he
then took over The Recycling Group
(TRG).’
Anthony’s family has a close personal
interest in these changes. Fifteen
years ago, his father John and brother
Robert were building TRG into a
strong business. Anthony was the
salesman.
‘We had no background in recycling
but we knew how to do business. Our
approach meant we won contracts –
and we kept them. AO was a custom-
er after 2004 when we won a contract
to process all of its fridges. We had a

strong relationship and we both knew
what the other wanted.’

BERTHA IS QUEEN
At that time, TRG was operating out of
a small ageing plant in Wales, prices
for fridge disposals were rock bottom
and the economies just didn’t stack up.
AO boss Roberts was concerned at the
risk to his Holy Grail of total customer
service so TRG became part of his
group, and the investment was found
for the state-of-the-art Telford facility –
with the Sants still firmly involved.

age nearby. It recycles more than
700,000 fridges a year, one-fifth of the
appliances currently thrown away
annually in the UK. Overlooking all of
the equipment is Bertha, an 80-tonne
shredding machine built and installed
by Austrian company, Andritz MeWa –
the name being chosen by a col-
league’s partner. Within Bertha’s
sealed chamber, huge rotating steel
chains smash up around 100 fridges
an hour.
Bertha marks the point in the process
where AO Recycling starts to make
money from recycling the recovered
appliances. The shredding process
and sorting delivers metal and plastic

‘THE NEXT NATURAL STEP IN OUR RECYCLING JOURNEY’
In June, AO Recycling announced that the neighbouring land it owns would be developed to
offer more refinement in the sorting of the plastic shredded by Bertha. The new facility is
expected to create around 100 jobs.
Because scrap plastics remains a tough market, AO Recycling believes the investment will
increase the quality and secure an important route to new markets. The company said: ‘The
investment was the next natural step in our recycling journey. We have created a plant that
can clean and refine to the highest possible standards. The aim of our recycling process has
always been to get the most out of the old white goods we collect so our customers know
that when they are giving us their old fridges, they are doing the best they possibly can for
the environment.’