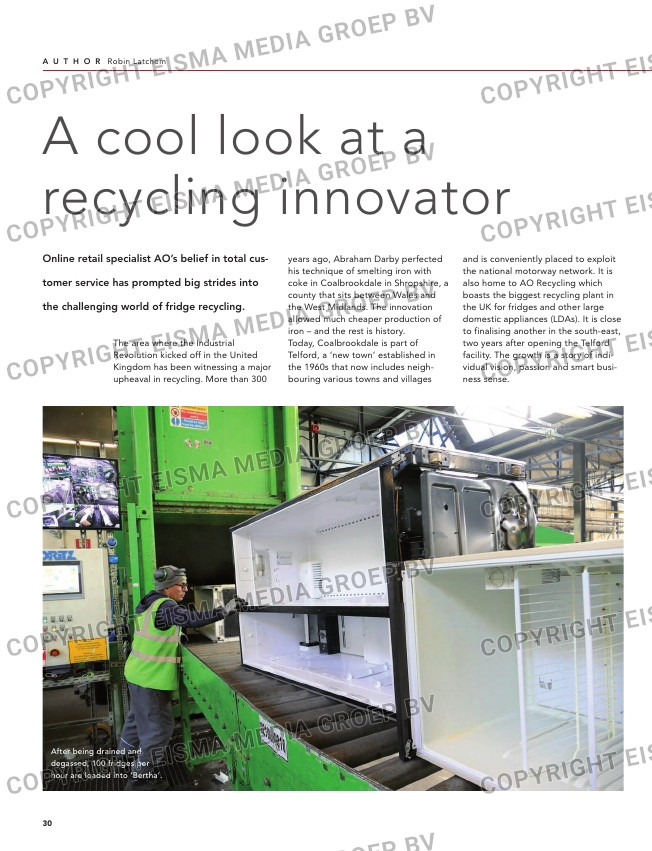 the challenging world of fridge recycling.

NO MORE FRIDGE MOUNTAINS
The disposal of a fridge reaching its
end-of-life has long been a challenge.
Before the days of producer responsi-
bility, the economics of recycling such
appliances did not stack up. Two
decades ago, in the UK at least,
‘fridge mountains’ were regularly in
the media, particularly because of
concern that CFC coolants in fridges
were helping to destroy the earth’s
ozone layer.
Enter AO – formerly Appliances
Online and now part of AO World
group, one of the country’s biggest
companies. The online-only retailer
operates in the UK, Germany and the
Netherlands and specialises in house-
hold appliances and electrical goods.
The company was founded in 2000. It
also owns AO Recycling.
AO founder John Roberts is passion-
ate about total customer service. For
Roberts, that means making it easier
for customers throughout the lives of
the products they’d been sold –
including when they are no longer
wanted.

FAMILY INVOLVEMENT
MAINTAINED
Anthony Sant, managing director of
AO Business, who proudly showed
Recycling International around the
new plant, says: ‘John was convinced
that if we always make it easy for cus-
tomers – easier than anyone else –
they will realise we care more than
anybody else, and they will give us
their business. He showed that when
he bought out its own logistics suppli-
er a decade ago and that was why he
then took over The Recycling Group
(TRG).’
Anthony’s family has a close personal
interest in these changes. Fifteen
years ago, his father John and brother
Robert were building TRG into a
strong business. Anthony was the
salesman.
‘We had no background in recycling
but we knew how to do business. Our
approach meant we won contracts –
and we kept them. AO was a custom-
er after 2004 when we won a contract
to process all of its fridges. We had a

The area where the Industrial
Revolution kicked off in the United
Kingdom has been witnessing a major
upheaval in recycling. More than 300

years ago, Abraham Darby perfected
his technique of smelting iron with
coke in Coalbrookdale in Shropshire, a
county that sits between Wales and
the West Midlands. The innovation
allowed much cheaper production of
iron – and the rest is history.
Today, Coalbrookdale is part of
Telford, a ‘new town’ established in
the 1960s that now includes neigh-
bouring various towns and villages

and is conveniently placed to exploit
the national motorway network. It is
also home to AO Recycling which
boasts the biggest recycling plant in
the UK for fridges and other large
domestic appliances (LDAs). It is close
to finalising another in the south-east,
two years after opening the Telford
facility. The growth is a story of indi-
vidual vision, passion and smart busi-
ness sense.

After being drained and
degassed, 100 fridges per
hour are loaded into ‘Bertha’.