Subscribe
27recyclinginternational.com | July/August | 2019 emphasising a need to find ‘a common approach’ and to ‘build new value chains’. According to Alssema, this new economy was definitely coming to ‘the developed and developi...
Read the entire page 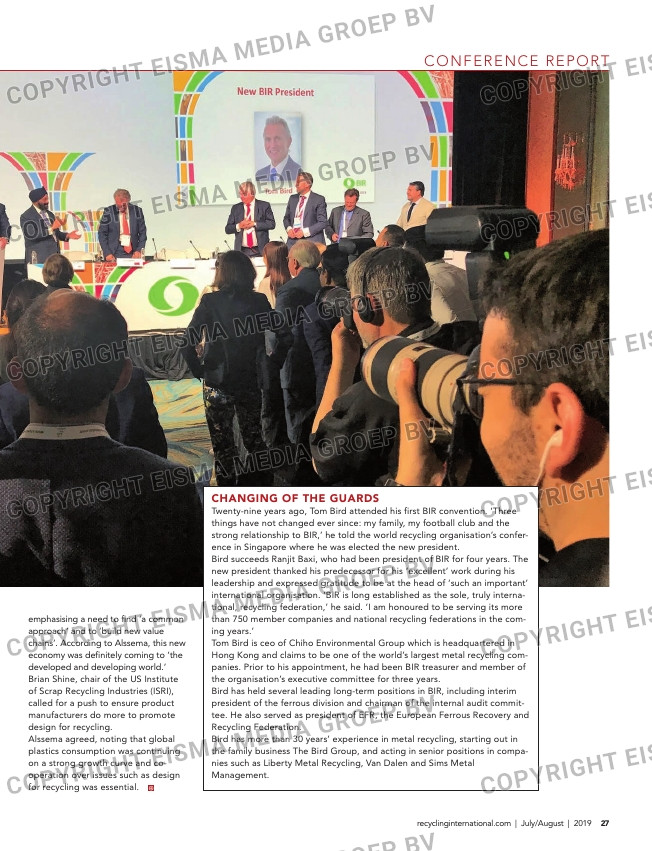 emphasising a need to find ‘a common
approach’ and to ‘build new value
chains’. According to Alssema, this new
economy was definitely coming to ‘the
developed and developing world.’
Brian Shine, chair of the US Institute
of Scrap Recycling Industries (ISRI),
called for a push to ensure product
manufacturers do more to promote
design for recycling.
Alssema agreed, noting that global
plastics consumption was continuing
on a strong growth curve and co-
operation over issues such as design
for recycling was essential.

CHANGING OF THE GUARDS
Twenty-nine years ago, Tom Bird attended his first BIR convention. ‘Three
things have not changed ever since: my family, my football club and the
strong relationship to BIR,’ he told the world recycling organisation’s confer-
ence in Singapore where he was elected the new president.
Bird succeeds Ranjit Baxi, who had been president of BIR for four years. The
new president thanked his predecessor for his ‘excellent’ work during his
leadership and expressed gratitude to be at the head of ‘such an important’
international organisation. ‘BIR is long established as the sole, truly interna-
tional, recycling federation,’ he said. ‘I am honoured to be serving its more
than 750 member companies and national recycling federations in the com-
ing years.’
Tom Bird is ceo of Chiho Environmental Group which is headquartered in
Hong Kong and claims to be one of the world’s largest metal recycling com-
panies. Prior to his appointment, he had been BIR treasurer and member of
the organisation’s executive committee for three years.
Bird has held several leading long-term positions in BIR, including interim
president of the ferrous division and chairman of the internal audit commit-
tee. He also served as president of EFR, the European Ferrous Recovery and
Recycling Federation.
Bird has more than 30 years’ experience in metal recycling, starting out in
the family business The Bird Group, and acting in senior positions in compa-
nies such as Liberty Metal Recycling, Van Dalen and Sims Metal
Management.