Subscribe
A U T H O R Martijn Reintjes 26 ‘This industry is ripe for expansion’ B I R m e e t s i n S i n g a p o re There is life after ‘China’, scrap market experts agreed at the latest convention of the Bureau of International R...
Read the entire page 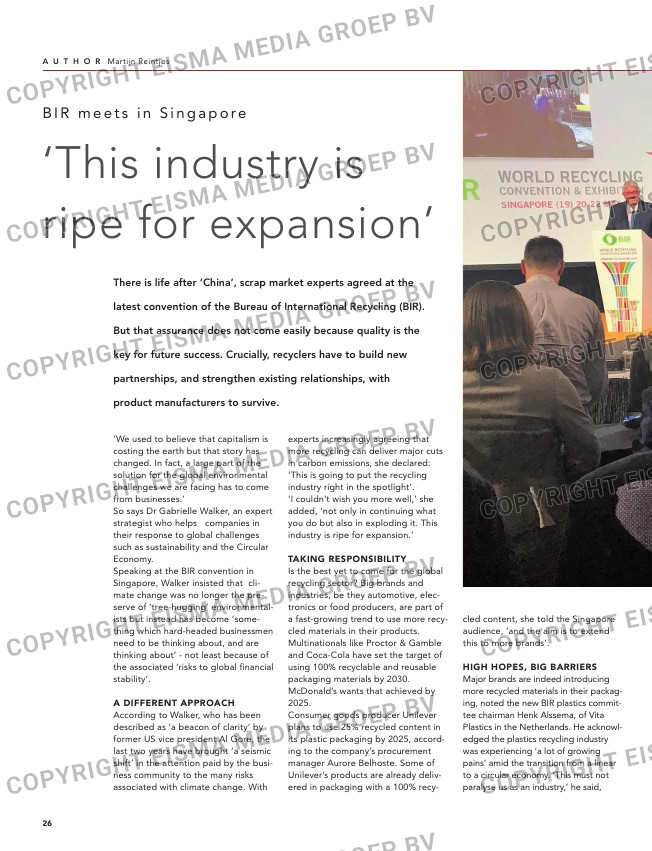 ‘This industry is
ripe for expansion’

There is life after ‘China’, scrap market experts agreed at the

latest convention of the Bureau of International Recycling (BIR).

But that assurance does not come easily because quality is the

key for future success. Crucially, recyclers have to build new

partnerships, and strengthen existing relationships, with

emphasising a need to find ‘a common
approach’ and to ‘build new value
chains’. According to Alssema, this new
economy was definitely coming to ‘the
developed and developing world.’
Brian Shine, chair of the US Institute
of Scrap Recycling Industries (ISRI),
called for a push to ensure product
manufacturers do more to promote
design for recycling.
Alssema agreed, noting that global
plastics consumption was continuing
on a strong growth curve and co-
operation over issues such as design
for recycling was essential.

‘We used to believe that capitalism is
costing the earth but that story has
changed. In fact, a large part of the
solution for the global environmental
challenges we are facing has to come
from businesses.’
So says Dr Gabrielle Walker, an expert
strategist who helps companies in
their response to global challenges
such as sustainability and the Circular
Economy.
Speaking at the BIR convention in
Singapore, Walker insisted that cli-
mate change was no longer the pre-
serve of ‘tree-hugging’ environmental-
ists but instead has become ‘some-
thing which hard-headed businessmen
need to be thinking about, and are
thinking about’ – not least because of
the associated ‘risks to global financial
stability’.

A DIFFERENT APPROACH
According to Walker, who has been
described as ‘a beacon of clarity’ by
former US vice president Al Gore, the
last two years have brought ‘a seismic
shift’ in the attention paid by the busi-
ness community to the many risks
associated with climate change. With

experts increasingly agreeing that
more recycling can deliver major cuts
in carbon emissions, she declared:
‘This is going to put the recycling
industry right in the spotlight’.
‘I couldn’t wish you more well,’ she
added, ‘not only in continuing what
you do but also in exploding it. This
industry is ripe for expansion.’

TAKING RESPONSIBILITY
Is the best yet to come for the global
recycling sector? Big brands and
industries, be they automotive, elec-
tronics or food producers, are part of
a fast-growing trend to use more recy-
cled materials in their products.
Multinationals like Proctor & Gamble
and Coca-Cola have set the target of
using 100% recyclable and reusable
packaging materials by 2030.
McDonald’s wants that achieved by
2025.
Consumer goods producer Unilever
plans to use 25% recycled content in
its plastic packaging by 2025, accord-
ing to the company’s procurement
manager Aurore Belhoste. Some of
Unilever’s products are already deliv-
ered in packaging with a 100% recy-

cled content, she told the Singapore
audience, ‘and the aim is to extend
this to more brands’.

HIGH HOPES, BIG BARRIERS
Major brands are indeed introducing
more recycled materials in their packag-
ing, noted the new BIR plastics commit-
tee chairman Henk Alssema, of Vita
Plastics in the Netherlands. He acknowl-
edged the plastics recycling industry
was experiencing ‘a lot of growing
pains’ amid the transition from a linear
to a circular economy. ‘This must not
paralyse us as an industry,’ he said,