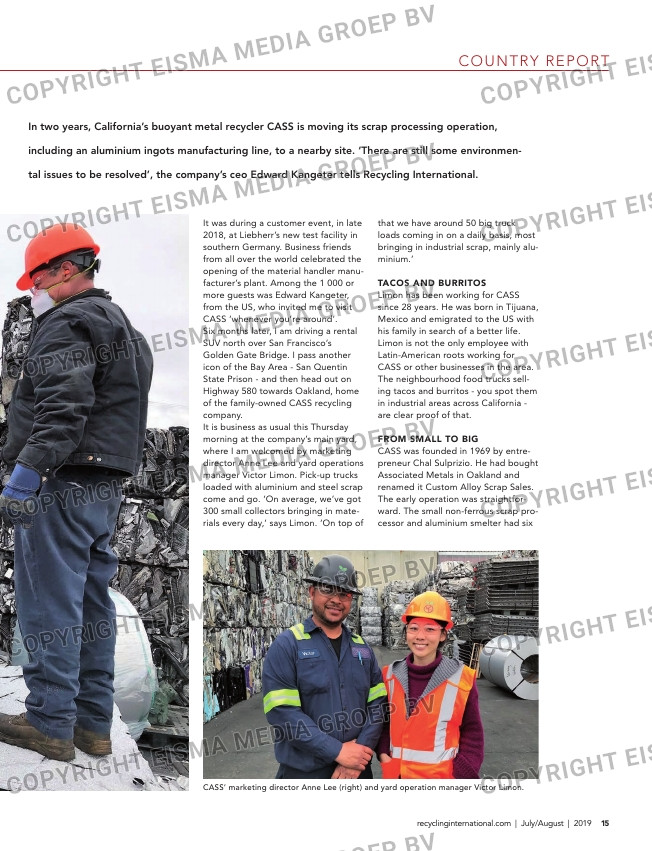 including an aluminium ingots manufacturing line, to a nearby site. ‘There are still some environmen-

It was during a customer event, in late
2018, at Liebherr’s new test facility in
southern Germany. Business friends
from all over the world celebrated the
opening of the material handler manu-
facturer’s plant. Among the 1 000 or
more guests was Edward Kangeter,
from the US, who invited me to visit
CASS ‘whenever you’re around’.
Six months later, I am driving a rental
SUV north over San Francisco’s
Golden Gate Bridge. I pass another
icon of the Bay Area – San Quentin
State Prison – and then head out on
Highway 580 towards Oakland, home
of the family-owned CASS recycling
company.
It is business as usual this Thursday
morning at the company’s main yard,
where I am welcomed by marketing
director Anne Lee and yard operations
manager Victor Limon. Pick-up trucks
loaded with aluminium and steel scrap
come and go. ‘On average, we’ve got
300 small collectors bringing in mate-
rials every day,’ says Limon. ‘On top of

that we have around 50 big truck
loads coming in on a daily basis, most
bringing in industrial scrap, mainly alu-
minium.’

TACOS AND BURRITOS
Limon has been working for CASS
since 28 years. He was born in Tijuana,
Mexico and emigrated to the US with
his family in search of a better life.
Limon is not the only employee with
Latin-American roots working for
CASS or other businesses in the area.
The neighbourhood food trucks sell-
ing tacos and burritos – you spot them
in industrial areas across California –
are clear proof of that.

FROM SMALL TO BIG
CASS was founded in 1969 by entre-
preneur Chal Sulprizio. He had bought
Associated Metals in Oakland and
renamed it Custom Alloy Scrap Sales.
The early operation was straightfor-
ward. The small non-ferrous scrap pro-
cessor and aluminium smelter had six