Subscribe
9recyclinginternational.com | July/August | 2021 INTERVIEW extend the life cycle instead of recy- cling them prematurely?’ Are you optimistic About where the e-scrAp sector is todAy? ‘Not long ago, the media was buzzing with p...
Read the entire page 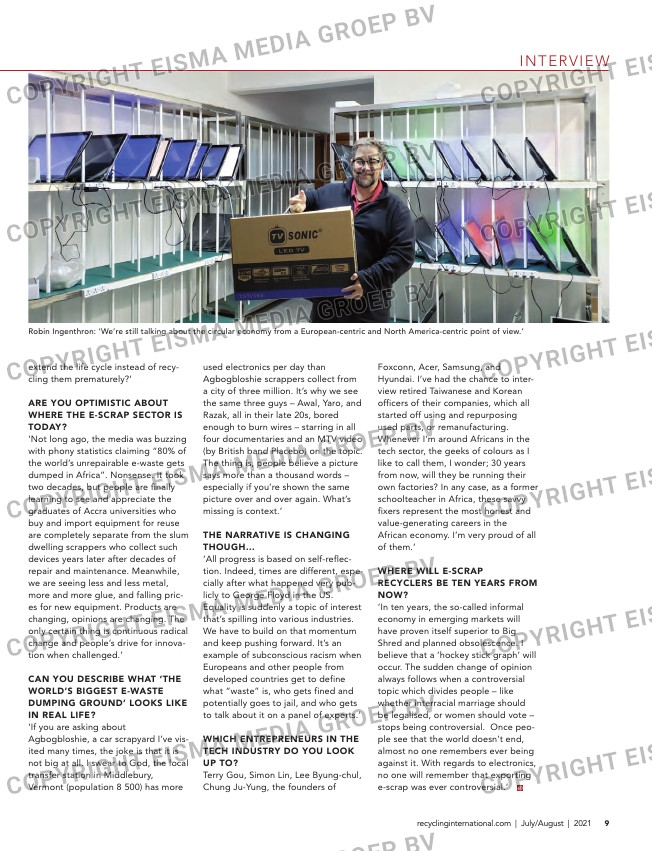 extend the life cycle instead of recy-
cling them prematurely?’

Are you optimistic About
where the e-scrAp sector is
todAy?
‘Not long ago, the media was buzzing
with phony statistics claiming “80% of
the world’s unrepairable e-waste gets
dumped in Africa”. Nonsense. It took
two decades, but people are finally
learning to see and appreciate the
graduates of Accra universities who
buy and import equipment for reuse
are completely separate from the slum
dwelling scrappers who collect such
devices years later after decades of
repair and maintenance. Meanwhile,
we are seeing less and less metal,
more and more glue, and falling pric-
es for new equipment. Products are
changing, opinions are changing. The
only certain thing is continuous radical
change and people’s drive for innova-
tion when challenged.’

cAn you describe whAt ‘the
world’s biggest e-wAste
dumping ground’ looks like
in reAl life?
‘If you are asking about
Agbogbloshie, a car scrapyard I’ve vis-
ited many times, the joke is that it is
not big at all. I swear to God, the local
transfer station in Middlebury,
Vermont (population 8 500) has more

used electronics per day than
Agbogbloshie scrappers collect from
a city of three million. It’s why we see
the same three guys – Awal, Yaro, and
Razak, all in their late 20s, bored
enough to burn wires – starring in all
four documentaries and an MTV video
(by British band Placebo) on the topic.
The thing is, people believe a picture
says more than a thousand words –
especially if you’re shown the same
picture over and over again. What’s
missing is context.’

the nArrAtive is chAnging
though…
‘All progress is based on self-reflec-
tion. Indeed, times are different, espe-
cially after what happened very pub-
licly to George Floyd in the US.
Equality is suddenly a topic of interest
that’s spilling into various industries.
We have to build on that momentum
and keep pushing forward. It’s an
example of subconscious racism when
Europeans and other people from
developed countries get to define
what “waste” is, who gets fined and
potentially goes to jail, and who gets
to talk about it on a panel of experts.’

which entrepreneurs in the
tech industry do you look
up to?
Terry Gou, Simon Lin, Lee Byung-chul,
Chung Ju-Yung, the founders of

Foxconn, Acer, Samsung, and
Hyundai. I’ve had the chance to inter-
view retired Taiwanese and Korean
officers of their companies, which all
started off using and repurposing
used parts, or remanufacturing.
Whenever I’m around Africans in the
tech sector, the geeks of colours as I
like to call them, I wonder; 30 years
from now, will they be running their
own factories? In any case, as a former
schoolteacher in Africa, these savvy
fixers represent the most honest and
value-generating careers in the
African economy. I’m very proud of all
of them.’

where will e-scrAp
recyclers be ten yeArs from
now?
‘In ten years, the so-called informal
economy in emerging markets will
have proven itself superior to Big
Shred and planned obsolescence. I
believe that a ‘hockey stick graph’ will
occur. The sudden change of opinion
always follows when a controversial
topic which divides people – like
whether interracial marriage should
be legalised, or women should vote –
stops being controversial. Once peo-
ple see that the world doesn’t end,
almost no one remembers ever being
against it. With regards to electronics,
no one will remember that exporting
e-scrap was ever controversial.’

Robin Ingenthron: ‘We’re still talking about the circular economy from a European-centric and North America-centric point of view.’