Subscribe
ferrous 75recyclinginternational.com | July/August | 2021 side for steel than for steel scrap’ dur- ing 2021. Tom Knippel of SA Recycling in the USA noted a previously unseen decoupling of new steel and scrap prices, adding that...
Read the entire page 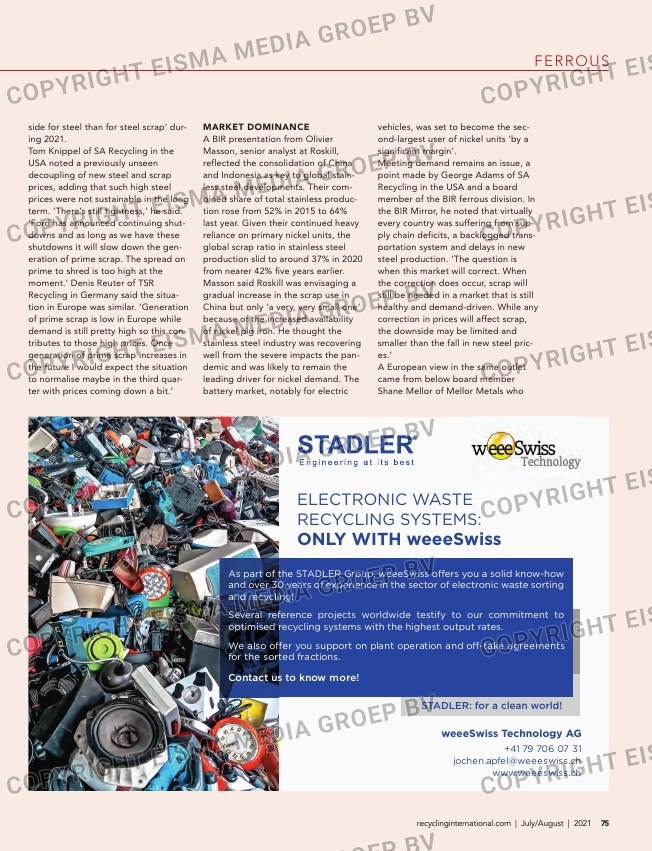 side for steel than for steel scrap’ dur-
ing 2021.
Tom Knippel of SA Recycling in the
USA noted a previously unseen
decoupling of new steel and scrap
prices, adding that such high steel
prices were not sustainable in the long
term. ‘There’s still tightness,’ he said.
‘Ford has announced continuing shut-
downs and as long as we have these
shutdowns it will slow down the gen-
eration of prime scrap. The spread on
prime to shred is too high at the
moment.’ Denis Reuter of TSR
Recycling in Germany said the situa-
tion in Europe was similar. ‘Generation
of prime scrap is low in Europe while
demand is still pretty high so this con-
tributes to those high prices. Once
generation of prime scrap increases in
the future I would expect the situation
to normalise maybe in the third quar-
ter with prices coming down a bit.’

MARKET DOMINANCE
A BIR presentation from Olivier
Masson, senior analyst at Roskill,
reflected the consolidation of China
and Indonesia as key to global stain-
less steel developments. Their com-
bined share of total stainless produc-
tion rose from 52% in 2015 to 64%
last year. Given their continued heavy
reliance on primary nickel units, the
global scrap ratio in stainless steel
production slid to around 37% in 2020
from nearer 42% five years earlier.
Masson said Roskill was envisaging a
gradual increase in the scrap use in
China but only ‘a very, very small one’
because of the increased availability
of nickel pig iron. He thought the
stainless steel industry was recovering
well from the severe impacts the pan-
demic and was likely to remain the
leading driver for nickel demand. The
battery market, notably for electric

vehicles, was set to become the sec-
ond-largest user of nickel units ‘by a
significant margin’.
Meeting demand remains an issue, a
point made by George Adams of SA
Recycling in the USA and a board
member of the BIR ferrous division. In
the BIR Mirror, he noted that virtually
every country was suffering from sup-
ply chain deficits, a backlogged trans-
portation system and delays in new
steel production. ‘The question is
when this market will correct. When
the correction does occur, scrap will
still be needed in a market that is still
healthy and demand-driven. While any
correction in prices will affect scrap,
the downside may be limited and
smaller than the fall in new steel pric-
es.’
A European view in the same outlet
came from below board member
Shane Mellor of Mellor Metals who

As part of the STADLER Group, weeeSwiss o ers you a solid know-how
and over 30 years of experience in the sector of electronic waste sorting
and recycling!

We also o er you support on plant operation and o -take agreements
for the sorted fractions.