Subscribe
58 Mahindra (India) India’s first one stop shop solution for vehicle recycling with cars being scrapped under the brand name of Cero. The com- pany owns dismantling centres at Greater Noida, Pune and Chennai and has collection centre...
Read the entire page 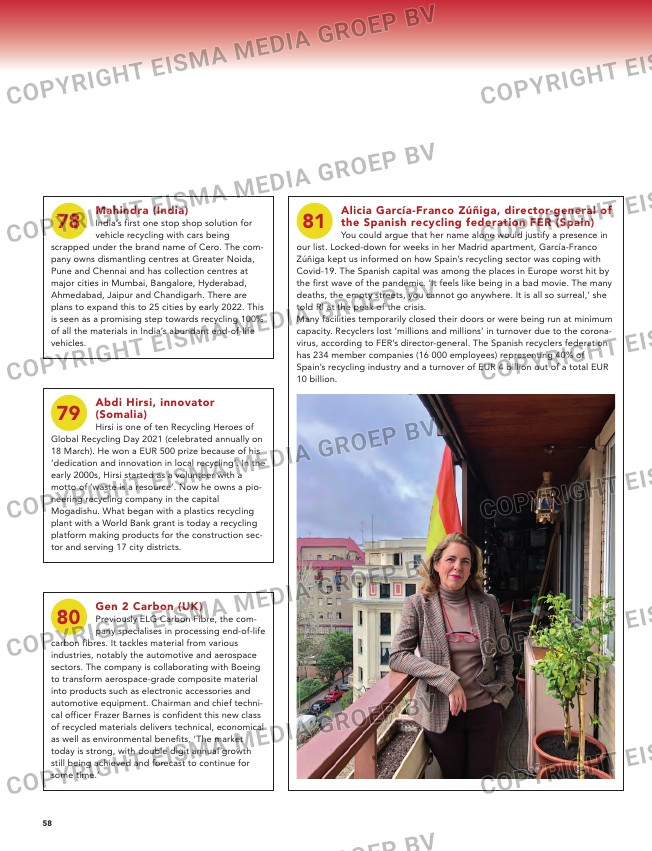 scrapped under the brand name of Cero. The com-
pany owns dismantling centres at Greater Noida,
Pune and Chennai and has collection centres at
major cities in Mumbai, Bangalore, Hyderabad,
Ahmedabad, Jaipur and Chandigarh. There are
plans to expand this to 25 cities by early 2022. This
is seen as a promising step towards recycling 100%
of all the materials in India’s abundant end-of-life
vehicles.

Abdi Hirsi, innovator
(Somalia)
Hirsi is one of ten Recycling Heroes of

Global Recycling Day 2021 (celebrated annually on
18 March). He won a EUR 500 prize because of his
‘dedication and innovation in local recycling’. In the
early 2000s, Hirsi started as a volunteer with a
motto of ‘waste is a resource’. Now he owns a pio-
neering recycling company in the capital
Mogadishu. What began with a plastics recycling
plant with a World Bank grant is today a recycling
platform making products for the construction sec-
tor and serving 17 city districts.

carbon fibres. It tackles material from various
industries, notably the automotive and aerospace
sectors. The company is collaborating with Boeing
to transform aerospace-grade composite material
into products such as electronic accessories and
automotive equipment. Chairman and chief techni-
cal officer Frazer Barnes is confident this new class
of recycled materials delivers technical, economical
as well as environmental benefits. ‘The market
today is strong, with double digit annual growth
still being achieved and forecast to continue for
some time.’

Pascal Leroy, director general of the WEEE
Forum (Belgium)
Leroy has overseen operations of the WEEE Forum since 2007.

Besides writing papers on e-scrap and battery recycling, he has also super-
vised the innovative research and development Weelabex project, funded
from the EU’s Life programme. Leroy’s efforts have been mainly geared
towards fostering understanding between the many different stakeholders
in the recycling sector, creating a European standard of excellence for
e-scrap recycling, and promoting extended producer responsibility
schemes. He believes that blockchain technology will ‘push the boundaries’
of electronics recycling.

Alicia García-Franco Zúñiga, director-general of
the Spanish recycling federation FER (Spain)
You could argue that her name alone would justify a presence in

our list. Locked-down for weeks in her Madrid apartment, García-Franco
Zúñiga kept us informed on how Spain’s recycling sector was coping with
Covid-19. The Spanish capital was among the places in Europe worst hit by
the first wave of the pandemic. ‘It feels like being in a bad movie. The many
deaths, the empty streets, you cannot go anywhere. It is all so surreal,’ she
told RI at the peak of the crisis.
Many facilities temporarily closed their doors or were being run at minimum
capacity. Recyclers lost ‘millions and millions’ in turnover due to the corona-
virus, according to FER’s director-general. The Spanish recyclers federation
has 234 member companies (16 000 employees) representing 40% of
Spain’s recycling industry and a turnover of EUR 4 billion out of a total EUR
10 billion.

African continent, such as in Rwanda, a country that presents itself to the
outside world as modern, efficient and above all Africa’s e-scrap recycling
role model.
With more than 7% GPD growth year-on-year since 2000, the tiny nation in
Central Africa has seen electronics use increase from 33 000 tonnes in 2014
to almost 50 000 tonnes in 2020 and this is projected to hit 300 000 tonnes
by 2050.
‘Clearly, this is offering huge potential for electronics recycling,’ says Mbera,
who leads the
Enviroserve Green
Park facility, set up
by the Rwandese
government in part-
nership with a local
subsidiary of Dubai-
headquartered elec-
tronics recycler
Enviroserve. ‘The
facility is one thing,’
he points out. ‘The
other is that new
laws for e-waste, and
the enforcement of
these laws which
prove to work well in
Rwanda compared
to other African
countries, will further
boost recycling num-
bers.’