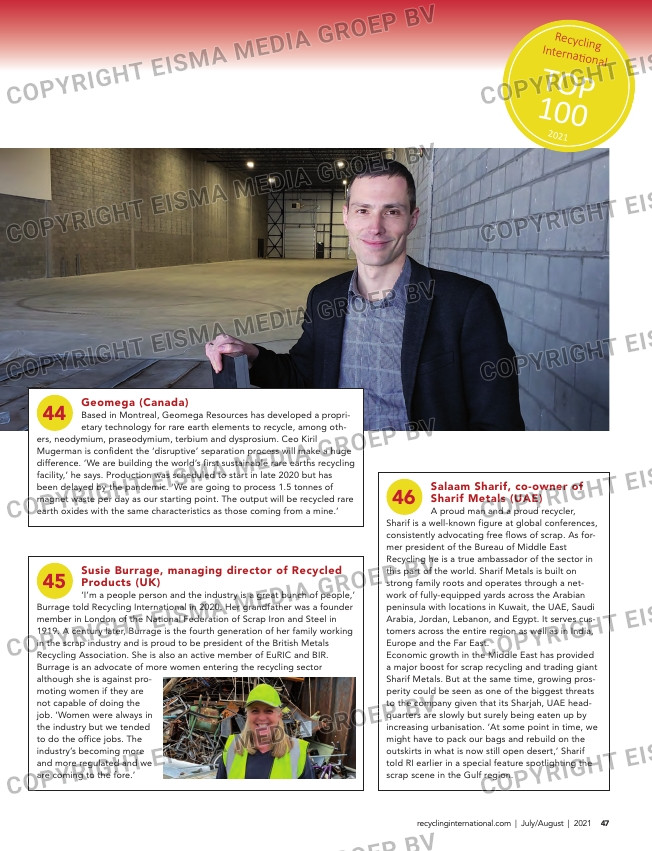 John Shegerian, co-founder and ceo of
Electronic Recyclers International (USA)
With irresistible energy and no shortage of publicity, this entre-

preneur from Fresno, California campaigns for more sustainable and innova-
tive e-scrap recycling. Shegerian has a weekly podcast called ‘Impact’ and
he is frequently asked to speak at conferences, notably on the topics of
cybercrime security.
Shegerian built ERI from a 4.5 tonnes startup in the early part of the century
into what is now claimed to be one of the biggest electronics recycling com-
panies in the world with eight locations in the US and a global network of
100 facilities in more than 46 countries.
Electronics recycling is ERI’s biggest activity but ever more business comes
from refurbishment and data destruction. Companies and governments still
hand over their computers to whoever wants to pay for them without won-
dering what happens to the valuable data contained within them, warns
Shegerian. ‘By doing so, we simply give our secrets away to the highest bid-
ders, which could well be, say, ISIS,’ he told RI a couple of years ago.
Meanwhile, ERI has been busy introducing new technology to boost capaci-
ty and scrap quality. Robots Sam and Ernie lend a hand at the sorting lines
of ERI’s Fresno and Plainfield, Indiana facilities.

Sharif is a well-known figure at global conferences,
consistently advocating free flows of scrap. As for-
mer president of the Bureau of Middle East
Recycling he is a true ambassador of the sector in
this part of the world. Sharif Metals is built on
strong family roots and operates through a net-
work of fully-equipped yards across the Arabian
peninsula with locations in Kuwait, the UAE, Saudi
Arabia, Jordan, Lebanon, and Egypt. It serves cus-
tomers across the entire region as well as in India,
Europe and the Far East.
Economic growth in the Middle East has provided
a major boost for scrap recycling and trading giant
Sharif Metals. But at the same time, growing pros-
perity could be seen as one of the biggest threats
to the company given that its Sharjah, UAE head-
quarters are slowly but surely being eaten up by
increasing urbanisation. ‘At some point in time, we
might have to pack our bags and rebuild on the
outskirts in what is now still open desert,’ Sharif
told RI earlier in a special feature spotlighting the
scrap scene in the Gulf region.

Susie Burrage, managing director of Recycled
Products (UK)
‘I’m a people person and the industry is a great bunch of people,’

Burrage told Recycling International in 2020. Her grandfather was a founder
member in London of the National Federation of Scrap Iron and Steel in
1919. A century later, Burrage is the fourth generation of her family working
in the scrap industry and is proud to be president of the British Metals
Recycling Association. She is also an active member of EuRIC and BIR.
Burrage is an advocate of more women entering the recycling sector
although she is against pro-
moting women if they are
not capable of doing the
job. ‘Women were always in
the industry but we tended
to do the office jobs. The
industry’s becoming more
and more regulated and we
are coming to the fore.’

Geomega (Canada)
Based in Montreal, Geomega Resources has developed a propri-
etary technology for rare earth elements to recycle, among oth-

ers, neodymium, praseodymium, terbium and dysprosium. Ceo Kiril
Mugerman is confident the ‘disruptive’ separation process will make a huge
difference. ‘We are building the world’s first sustainable rare earths recycling
facility,’ he says. Production was scheduled to start in late 2020 but has
been delayed by the pandemic. ‘We are going to process 1.5 tonnes of
magnet waste per day as our starting point. The output will be recycled rare
earth oxides with the same characteristics as those coming from a mine.’