Subscribe
46 Paul & Chris Coyte of Hayes Metals (New Zealand) The Coyte brothers run the fourth gen- eration family business which has grown into the largest producer of brass and bronze ingots in Australasia with manufacturing and warehousi...
Read the entire page 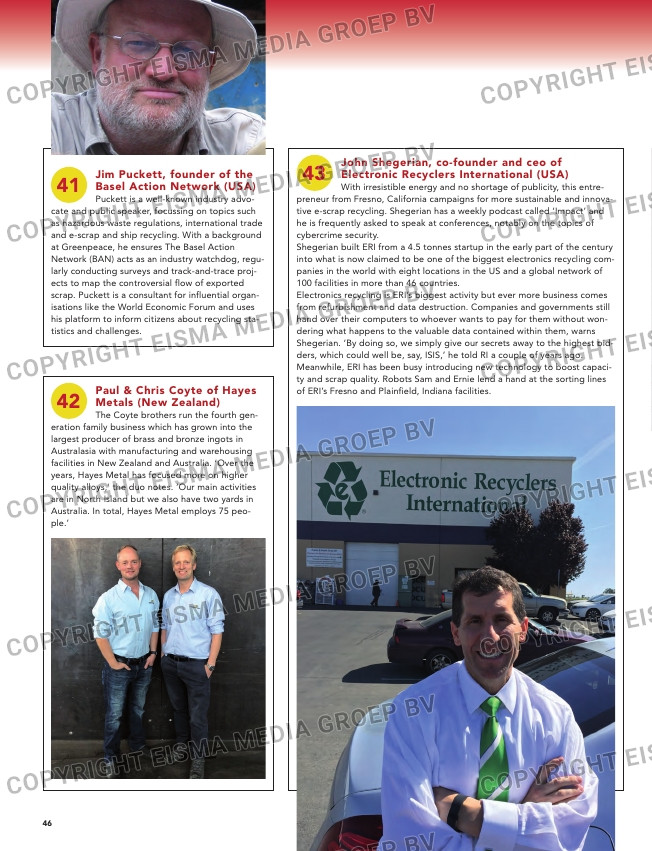 eration family business which has grown into the
largest producer of brass and bronze ingots in
Australasia with manufacturing and warehousing
facilities in New Zealand and Australia. ‘Over the
years, Hayes Metal has focused more on higher
quality alloys,’ the duo notes. ‘Our main activities
are in North Island but we also have two yards in
Australia. In total, Hayes Metal employs 75 peo-
ple.’

cate and public speaker, focussing on topics such
as hazardous waste regulations, international trade
and e-scrap and ship recycling. With a background
at Greenpeace, he ensures The Basel Action
Network (BAN) acts as an industry watchdog, regu-
larly conducting surveys and track-and-trace proj-
ects to map the controversial flow of exported
scrap. Puckett is a consultant for influential organ-
isations like the World Economic Forum and uses
his platform to inform citizens about recycling sta-
tistics and challenges.

John Shegerian, co-founder and ceo of
Electronic Recyclers International (USA)
With irresistible energy and no shortage of publicity, this entre-

preneur from Fresno, California campaigns for more sustainable and innova-
tive e-scrap recycling. Shegerian has a weekly podcast called ‘Impact’ and
he is frequently asked to speak at conferences, notably on the topics of
cybercrime security.
Shegerian built ERI from a 4.5 tonnes startup in the early part of the century
into what is now claimed to be one of the biggest electronics recycling com-
panies in the world with eight locations in the US and a global network of
100 facilities in more than 46 countries.
Electronics recycling is ERI’s biggest activity but ever more business comes
from refurbishment and data destruction. Companies and governments still
hand over their computers to whoever wants to pay for them without won-
dering what happens to the valuable data contained within them, warns
Shegerian. ‘By doing so, we simply give our secrets away to the highest bid-
ders, which could well be, say, ISIS,’ he told RI a couple of years ago.
Meanwhile, ERI has been busy introducing new technology to boost capaci-
ty and scrap quality. Robots Sam and Ernie lend a hand at the sorting lines
of ERI’s Fresno and Plainfield, Indiana facilities.

Susie Burrage, managing director of Recycled
Products (UK)
‘I’m a people person and the industry is a great bunch of people,’

Burrage told Recycling International in 2020. Her grandfather was a founder
member in London of the National Federation of Scrap Iron and Steel in
1919. A century later, Burrage is the fourth generation of her family working
in the scrap industry and is proud to be president of the British Metals
Recycling Association. She is also an active member of EuRIC and BIR.
Burrage is an advocate of more women entering the recycling sector
although she is against pro-
moting women if they are
not capable of doing the
job. ‘Women were always in
the industry but we tended
to do the office jobs. The
industry’s becoming more
and more regulated and we
are coming to the fore.’