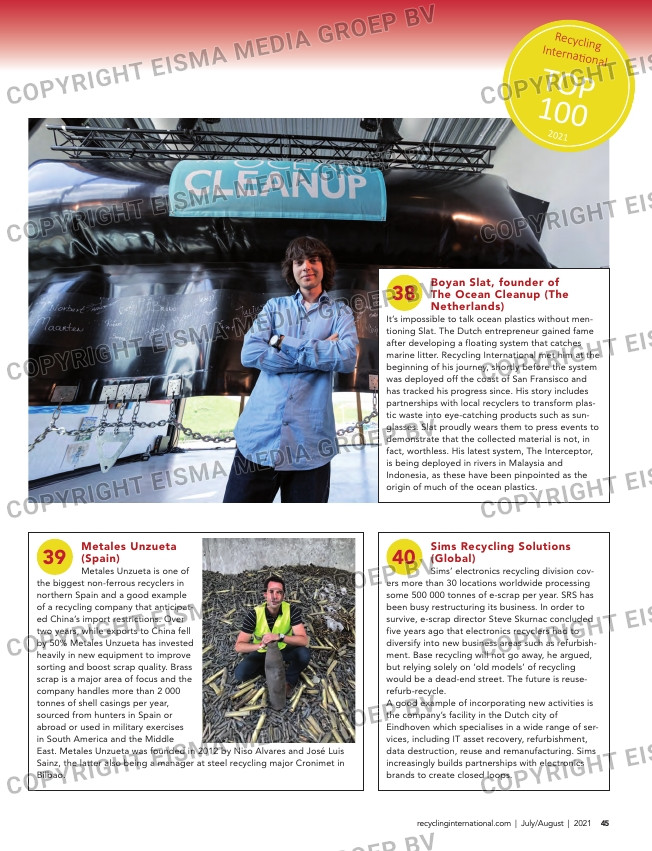 Boyan Slat, founder of
The Ocean Cleanup (The
Netherlands)

It’s impossible to talk ocean plastics without men-
tioning Slat. The Dutch entrepreneur gained fame
after developing a floating system that catches
marine litter. Recycling International met him at the
beginning of his journey, shortly before the system
was deployed off the coast of San Fransisco and
has tracked his progress since. His story includes
partnerships with local recyclers to transform plas-
tic waste into eye-catching products such as sun-
glasses. Slat proudly wears them to press events to
demonstrate that the collected material is not, in
fact, worthless. His latest system, The Interceptor,
is being deployed in rivers in Malaysia and
Indonesia, as these have been pinpointed as the
origin of much of the ocean plastics.

the biggest non-ferrous recyclers in
northern Spain and a good example
of a recycling company that anticipat-
ed China’s import restrictions. Over
two years, while exports to China fell
by 50% Metales Unzueta has invested
heavily in new equipment to improve
sorting and boost scrap quality. Brass
scrap is a major area of focus and the
company handles more than 2 000
tonnes of shell casings per year,
sourced from hunters in Spain or
abroad or used in military exercises
in South America and the Middle
East. Metales Unzueta was founded in 2012 by Niso Alvares and José Luis
Sainz, the latter also being a manager at steel recycling major Cronimet in
Bilbao.

ers more than 30 locations worldwide processing
some 500 000 tonnes of e-scrap per year. SRS has
been busy restructuring its business. In order to
survive, e-scrap director Steve Skurnac concluded
five years ago that electronics recyclers had to
diversify into new business areas such as refurbish-
ment. Base recycling will not go away, he argued,
but relying solely on ‘old models’ of recycling
would be a dead-end street. The future is reuse-
refurb-recycle.
A good example of incorporating new activities is
the company’s facility in the Dutch city of
Eindhoven which specialises in a wide range of ser-
vices, including IT asset recovery, refurbishment,
data destruction, reuse and remanufacturing. Sims
increasingly builds partnerships with electronics
brands to create closed loops.