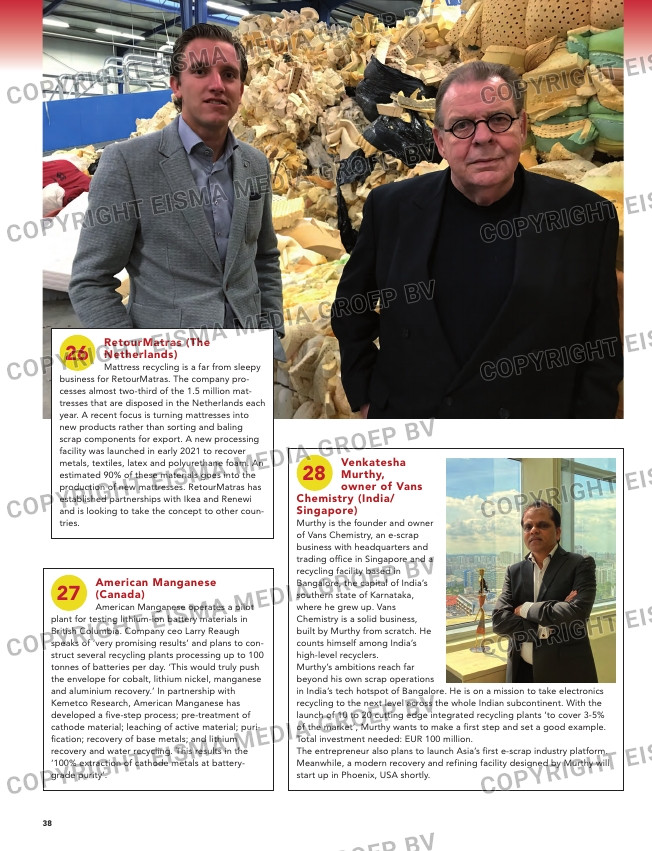 plant for testing lithium-ion battery materials in
British Columbia. Company ceo Larry Reaugh
speaks of ‘very promising results’ and plans to con-
struct several recycling plants processing up to 100
tonnes of batteries per day. ‘This would truly push
the envelope for cobalt, lithium nickel, manganese
and aluminium recovery.’ In partnership with
Kemetco Research, American Manganese has
developed a five-step process; pre-treatment of
cathode material; leaching of active material; puri-
fication; recovery of base metals; and lithium
recovery and water recycling. This results in the
‘100% extraction of cathode metals at battery-
grade purity’.

Chemistry (India/
Singapore)
Murthy is the founder and owner
of Vans Chemistry, an e-scrap
business with headquarters and
trading office in Singapore and a
recycling facility based in
Bangalore, the capital of India’s
southern state of Karnataka,
where he grew up. Vans
Chemistry is a solid business,
built by Murthy from scratch. He
counts himself among India’s
high-level recyclers.
Murthy’s ambitions reach far
beyond his own scrap operations
in India’s tech hotspot of Bangalore. He is on a mission to take electronics
recycling to the next level across the whole Indian subcontinent. With the
launch of 10 to 20 cutting edge integrated recycling plants ‘to cover 3-5%
of the market’, Murthy wants to make a first step and set a good example.
Total investment needed: EUR 100 million.
The entrepreneur also plans to launch Asia’s first e-scrap industry platform.
Meanwhile, a modern recovery and refining facility designed by Murthy will
start up in Phoenix, USA shortly.

RetourMatras (The
Netherlands)
Mattress recycling is a far from sleepy

business for RetourMatras. The company pro-
cesses almost two-third of the 1.5 million mat-
tresses that are disposed in the Netherlands each
year. A recent focus is turning mattresses into
new products rather than sorting and baling
scrap components for export. A new processing
facility was launched in early 2021 to recover
metals, textiles, latex and polyurethane foam. An
estimated 90% of these materials goes into the
production of new mattresses. RetourMatras has
established partnerships with Ikea and Renewi
and is looking to take the concept to other coun-
tries.

ing director of Van
Peperzeel (The
Netherlands)
Van Peperzeel is a Dutch bat-
tery recycling pioneer who
owns the largest battery recy-
cling facility in the country,
which he started more than
three decades ago. He loves
technology and innovation and
has been working on a solution
to reduce electric vehicle fires
for the last few years. Having endured a fire at his own site, this battle
against the flames is a very personal one. Luckily, Van Peperzeel was able to
rebuild the damaged part of his plant and has installed extra precautions to
prevent future disasters. He is a popular panellist at events where he speaks
out on the urgent need for practical ways to make battery transport safer,
easier and more efficient. In his view, proper labelling of dangerous (and
hazardous) goods is key.

tinues to expand its capacity, mainly in Ontario but also in other Canadian
provinces. The company has seven MRFs, together processing a total of one
million tonnes of materials per year. All plants are located in or around
Toronto, an area that is home to more than six million people. The company
processes more than 60% of the materials from Ontario’s Blue Box collec-
tion programme, including paper and cardboard, plastics, metals and glass.
Although Canada Fibers started out as a paper recycler, its operations have
evolved to incorporate recovery and a wide variety of recycled materials.
‘The local circular economy for economic and environmental reasons is
absolute Nirvana,’ vice president Mark Badger told RI a couple of years ago.
‘For Canada Fibers as well as for me personally. Before the Lord takes me
either up or down, I want to give my contribution to a more sustainable
world.’