Subscribe
37recyclinginternational.com | July/August | 2021 RecyclingInterna�onal TOP 100 2021 Scrap Metal City (Saudi Arabia) One the most impressive scrap recycling hotspots ever featured in this magazine, Scrap Metal City is 100 or so k...
Read the entire page 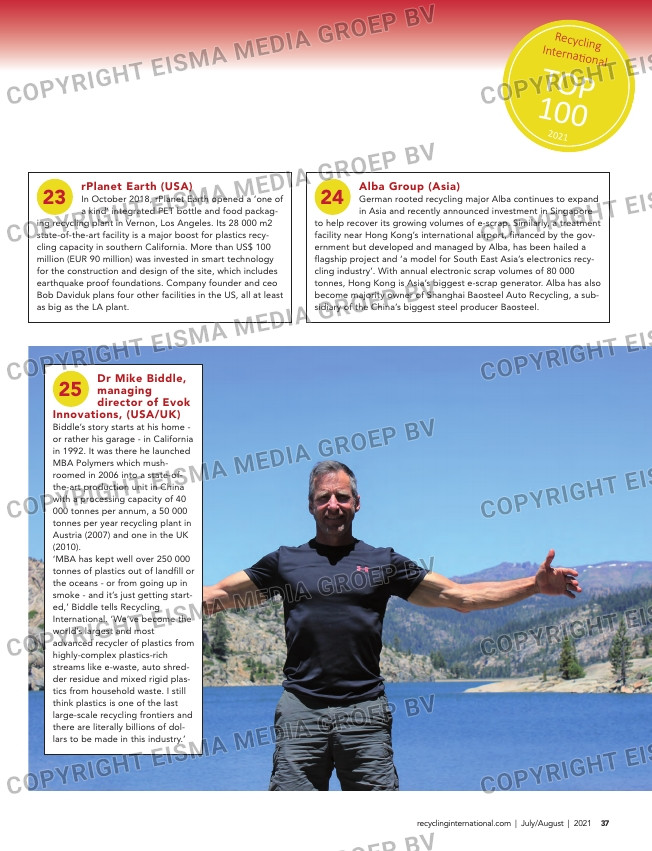 Saudi Arabia’s capital Riyadh. It’s a walled industrial zone covering 3km by
3km in the desert and home to around 200 scrap yards, most of which are
small, some are bigger. These yards provide jobs to 5 000 people: foreign
workers from Pakistan, India, Bangladesh and elsewhere. Many not only
work here but also live in cabins alongside the yards. Working in the hot
desert sun can be tough and in the summer months from April to October,
temperatures can easily climb to 50C. So here’s to all the hard workers of
Scrap Metal City!

Tom Bird, president of the Bureau of
International Recycling (Belgium/UK)
Being BIR president in times like these is not easy but we believe

Bird has done an excellent job. With a dedicated team in Brussels, he has
led BIR through the pandemic from the front. Under his leadership, the
world recycling organisation has implemented more significant changes to
the way it works and communicates than we’ve seen in BIR’s history.
Even so, halfway his four-year term, Bird reflects with mixed feelings. ‘I cer-
tainly didn’t think I’d be sitting through so many virtual meetings and con-
ventions,’ he told RI in a recent interview. ‘In truth, it’s been disappointing
as president not to be able to get out to meet people and promote BIR in
person.’

rPlanet Earth (USA)
In October 2018, rPlanet Earth opened a ‘one of
a kind’ integrated PET bottle and food packag-

ing recycling plant in Vernon, Los Angeles. Its 28 000 m2
state-of-the-art facility is a major boost for plastics recy-
cling capacity in southern California. More than US$ 100
million (EUR 90 million) was invested in smart technology
for the construction and design of the site, which includes
earthquake proof foundations. Company founder and ceo
Bob Daviduk plans four other facilities in the US, all at least
as big as the LA plant.

to help recover its growing volumes of e-scrap. Similarly, a treatment
facility near Hong Kong’s international airport, financed by the gov-
ernment but developed and managed by Alba, has been hailed a
flagship project and ‘a model for South East Asia’s electronics recy-
cling industry’. With annual electronic scrap volumes of 80 000
tonnes, Hong Kong is Asia’s biggest e-scrap generator. Alba has also
become majority owner of Shanghai Baosteel Auto Recycling, a sub-
sidiary of the China’s biggest steel producer Baosteel.

Innovations, (USA/UK)
Biddle’s story starts at his home –
or rather his garage – in California
in 1992. It was there he launched
MBA Polymers which mush-
roomed in 2006 into a state-of-
the-art production unit in China
with a processing capacity of 40
000 tonnes per annum, a 50 000
tonnes per year recycling plant in
Austria (2007) and one in the UK
(2010).
‘MBA has kept well over 250 000
tonnes of plastics out of landfill or
the oceans – or from going up in
smoke – and it’s just getting start-
ed,’ Biddle tells Recycling
International. ‘We’ve become the
world’s largest and most
advanced recycler of plastics from
highly-complex plastics-rich
streams like e-waste, auto shred-
der residue and mixed rigid plas-
tics from household waste. I still
think plastics is one of the last
large-scale recycling frontiers and
there are literally billions of dol-
lars to be made in this industry.’