Subscribe
34 ARN (The Netherlands) Car recycling organisation ARN recycles almost 98.5% (by weight) of end-of-life vehicles – the bulk of the 210 000 vehicles that are taken off Dutch roads annually. The recycling rate is high because the pos...
Read the entire page 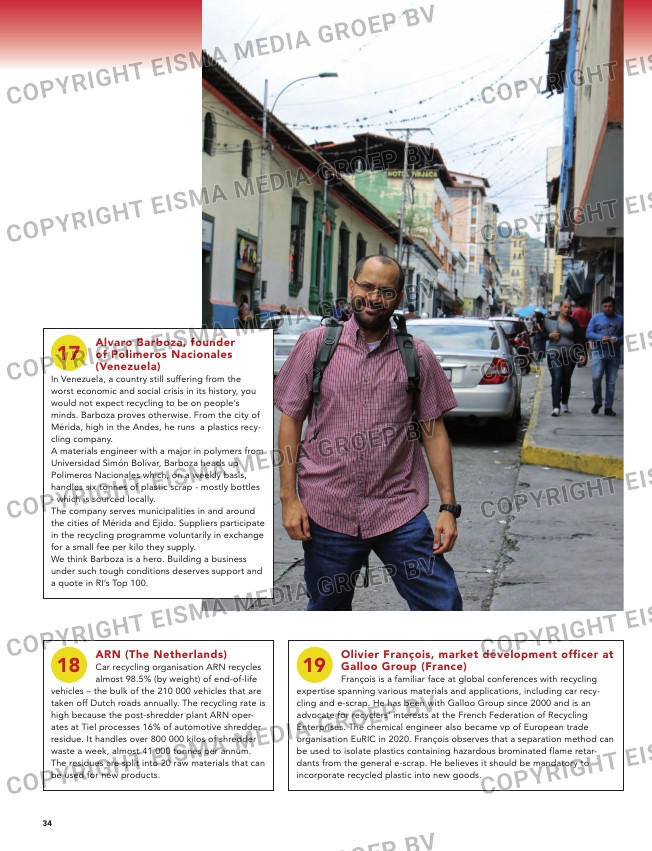 vehicles – the bulk of the 210 000 vehicles that are
taken off Dutch roads annually. The recycling rate is
high because the post-shredder plant ARN oper-
ates at Tiel processes 16% of automotive shredder
residue. It handles over 800 000 kilos of shredder
waste a week, almost 41 000 tonnes per annum.
The residues are split into 20 raw materials that can
be used for new products.

expertise spanning various materials and applications, including car recy-
cling and e-scrap. He has been with Galloo Group since 2000 and is an
advocate for recyclers’ interests at the French Federation of Recycling
Enterprises. The chemical engineer also became vp of European trade
organisation EuRIC in 2020. François observes that a separation method can
be used to isolate plastics containing hazardous brominated flame retar-
dants from the general e-scrap. He believes it should be mandatory to
incorporate recycled plastic into new goods.

In Venezuela, a country still suffering from the
worst economic and social crisis in its history, you
would not expect recycling to be on people’s
minds. Barboza proves otherwise. From the city of
Mérida, high in the Andes, he runs a plastics recy-
cling company.
A materials engineer with a major in polymers from
Universidad Simón Bolívar, Barboza heads up
Polimeros Nacionales which, on a weekly basis,
handles six tonnes of plastic scrap – mostly bottles
– which is sourced locally.
The company serves municipalities in and around
the cities of Mérida and Ejido. Suppliers participate
in the recycling programme voluntarily in exchange
for a small fee per kilo they supply.
We think Barboza is a hero. Building a business
under such tough conditions deserves support and
a quote in RI’s Top 100.