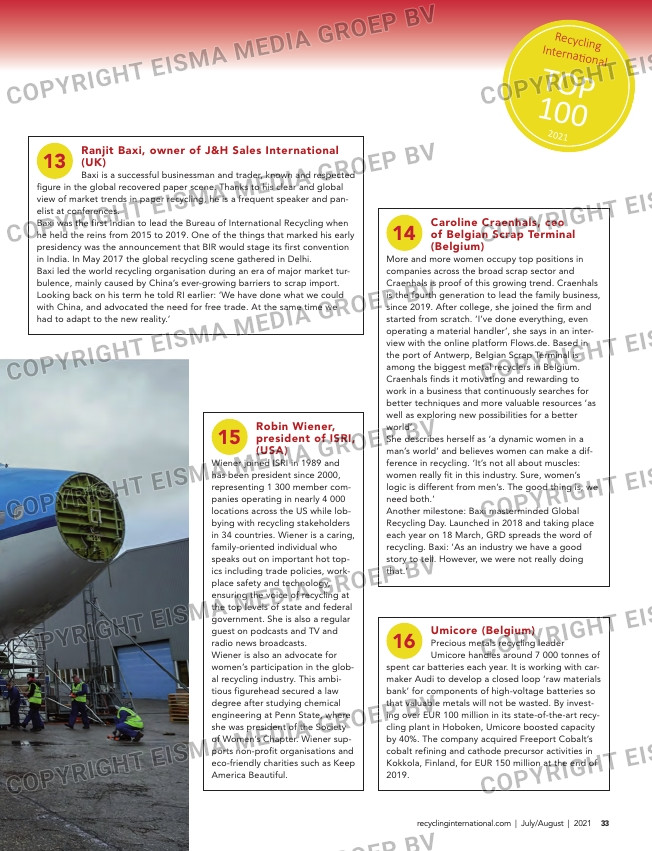 2021
Marc Ehrlich, ceo of Vipa Group (Switzerland)
While some in the paper recycling sector continue to struggle
with shifting markets caused by China’s scrap import restrictions,

others have seen spectacular business growth. Among them is Vipa. In
2019 alone the company’s exports of recovered paper from Europe
increased by 38%. Vipa is already among the biggest recovered paper
enterprises worldwide but company owner Ehrlich sees plenty of room for
market growth.
Having launched Vipa USA in 2019 with offices in Los Angeles and on the
east coast, the company recently announced its participation in a start-up in
Mexico. Vipa has also expanded its activities in Greece. ‘The Greek paper
recycling market has huge growth potential,’ says Ehrlich. ‘Compared to
Germany or the Netherlands – with recovered paper markets that offer
nothing more to win – Greece offers a lot. The volumes are in place, the
recycling infrastructure is not – not yet.’

More and more women occupy top positions in
companies across the broad scrap sector and
Craenhals is proof of this growing trend. Craenhals
is the fourth generation to lead the family business,
since 2019. After college, she joined the firm and
started from scratch. ‘I’ve done everything, even
operating a material handler’, she says in an inter-
view with the online platform Flows.de. Based in
the port of Antwerp, Belgian Scrap Terminal is
among the biggest metal recyclers in Belgium.
Craenhals finds it motivating and rewarding to
work in a business that continuously searches for
better techniques and more valuable resources ‘as
well as exploring new possibilities for a better
world’.
She describes herself as ‘a dynamic women in a
man’s world’ and believes women can make a dif-
ference in recycling. ‘It’s not all about muscles:
women really fit in this industry. Sure, women’s
logic is different from men’s. The good thing is, we
need both.’
Another milestone: Baxi masterminded Global
Recycling Day. Launched in 2018 and taking place
each year on 18 March, GRD spreads the word of
recycling. Baxi: ‘As an industry we have a good
story to tell. However, we were not really doing
that.’

spent car batteries each year. It is working with car-
maker Audi to develop a closed loop ‘raw materials
bank’ for components of high-voltage batteries so
that valuable metals will not be wasted. By invest-
ing over EUR 100 million in its state-of-the-art recy-
cling plant in Hoboken, Umicore boosted capacity
by 40%. The company acquired Freeport Cobalt’s
cobalt refining and cathode precursor activities in
Kokkola, Finland, for EUR 150 million at the end of
2019.

figure in the global recovered paper scene. Thanks to his clear and global
view of market trends in paper recycling, he is a frequent speaker and pan-
elist at conferences.
Baxi was the first Indian to lead the Bureau of International Recycling when
he held the reins from 2015 to 2019. One of the things that marked his early
presidency was the announcement that BIR would stage its first convention
in India. In May 2017 the global recycling scene gathered in Delhi.
Baxi led the world recycling organisation during an era of major market tur-
bulence, mainly caused by China’s ever-growing barriers to scrap import.
Looking back on his term he told RI earlier: ‘We have done what we could
with China, and advocated the need for free trade. At the same time we
had to adapt to the new reality.’

Wiener joined ISRI in 1989 and
has been president since 2000,
representing 1 300 member com-
panies operating in nearly 4 000
locations across the US while lob-
bying with recycling stakeholders
in 34 countries. Wiener is a caring,
family-oriented individual who
speaks out on important hot top-
ics including trade policies, work-
place safety and technology,
ensuring the voice of recycling at
the top levels of state and federal
government. She is also a regular
guest on podcasts and TV and
radio news broadcasts.
Wiener is also an advocate for
women’s participation in the glob-
al recycling industry. This ambi-
tious figurehead secured a law
degree after studying chemical
engineering at Penn State, where
she was president of the Society
of Women’s Chapter. Wiener sup-
ports non-profit organisations and
eco-friendly charities such as Keep
America Beautiful.