Subscribe
30 Adam Minter, author of Junkyard Planet (USA) Minter comes from a Minnesota scrap- yard family and has made it his life’s work to docu- ment the ins and outs of the global recycling indus- try. Having lived in Singapore for years, he...
Read the entire page 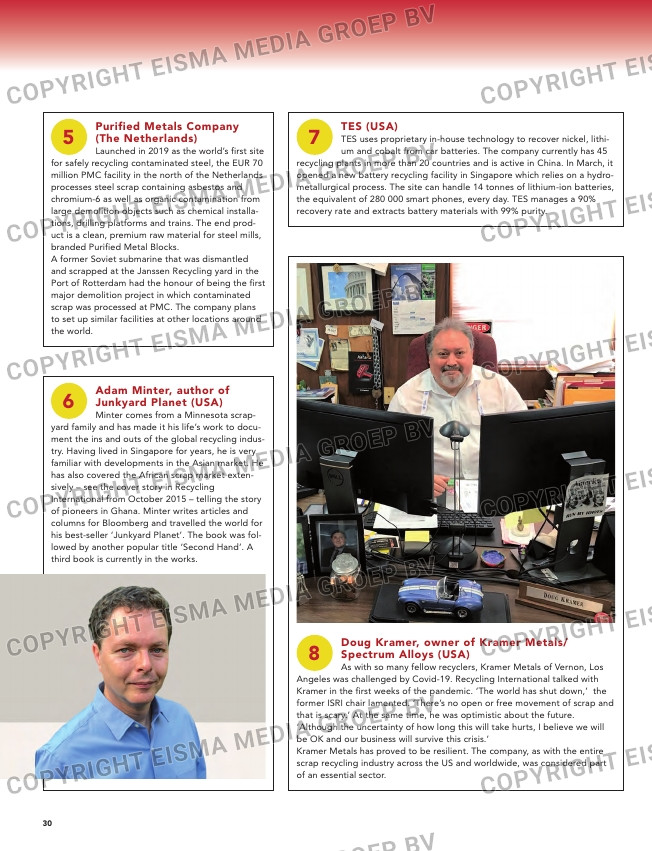 yard family and has made it his life’s work to docu-
ment the ins and outs of the global recycling indus-
try. Having lived in Singapore for years, he is very
familiar with developments in the Asian market. He
has also covered the African scrap market exten-
sively – see the cover story in Recycling
International from October 2015 – telling the story
of pioneers in Ghana. Minter writes articles and
columns for Bloomberg and travelled the world for
his best-seller ‘Junkyard Planet’. The book was fol-
lowed by another popular title ‘Second Hand’. A
third book is currently in the works.

Doug Kramer, owner of Kramer Metals/
Spectrum Alloys (USA)
As with so many fellow recyclers, Kramer Metals of Vernon, Los

Angeles was challenged by Covid-19. Recycling International talked with
Kramer in the first weeks of the pandemic. ‘The world has shut down,’ the
former ISRI chair lamented. ‘There’s no open or free movement of scrap and
that is scary.’ At the same time, he was optimistic about the future.
‘Although the uncertainty of how long this will take hurts, I believe we will
be OK and our business will survive this crisis.’
Kramer Metals has proved to be resilient. The company, as with the entire
scrap recycling industry across the US and worldwide, was considered part
of an essential sector.

for safely recycling contaminated steel, the EUR 70
million PMC facility in the north of the Netherlands
processes steel scrap containing asbestos and
chromium-6 as well as organic contamination from
large demolition objects such as chemical installa-
tions, drilling platforms and trains. The end prod-
uct is a clean, premium raw material for steel mills,
branded Purified Metal Blocks.
A former Soviet submarine that was dismantled
and scrapped at the Janssen Recycling yard in the
Port of Rotterdam had the honour of being the first
major demolition project in which contaminated
scrap was processed at PMC. The company plans
to set up similar facilities at other locations around
the world.

recycling plants in more than 20 countries and is active in China. In March, it
opened a new battery recycling facility in Singapore which relies on a hydro-
metallurgical process. The site can handle 14 tonnes of lithium-ion batteries,
the equivalent of 280 000 smart phones, every day. TES manages a 90%
recovery rate and extracts battery materials with 99% purity.

is a true ambassador for his country and its recycling sector. During the lat-
est BIR convention, Shah expressed deep sorrow at the Covid pandemic’s
devastating recent impact on India: ‘It’s beyond imagination; we paid a
heavy toll,’ he said.
Talking with this commerce graduate from Mumbai, helps to better under-
stand India. ‘We are not there yet, we have to undo decades of inefficiency
and corruption. But the good days will come. This is all work in progress,’ he
told RI in 2018.
The good news is, India has already the world’s sixth-largest economy with
65% of its population under the age of 35. Every day, 40 km of new road is
being added and the country already has more than a billion telephone con-
nections.
Shah is vice-president of the Metal Recycling Association of India and serves
on the metals committee of the Federation of Indian Chambers of
Commerce and Industry. In June 2021 Shah was appointed the new division-
al president for non-ferrous at BIR.