Subscribe
10 ‘15% of plastics sustainable by 2030’ says report A future for plastic recycling in which the US will catch up the EU on the mechani- cal recycling of PET by 2030 and China will ramp up pyrolysis is set out in a new report, tit...
Read the entire page 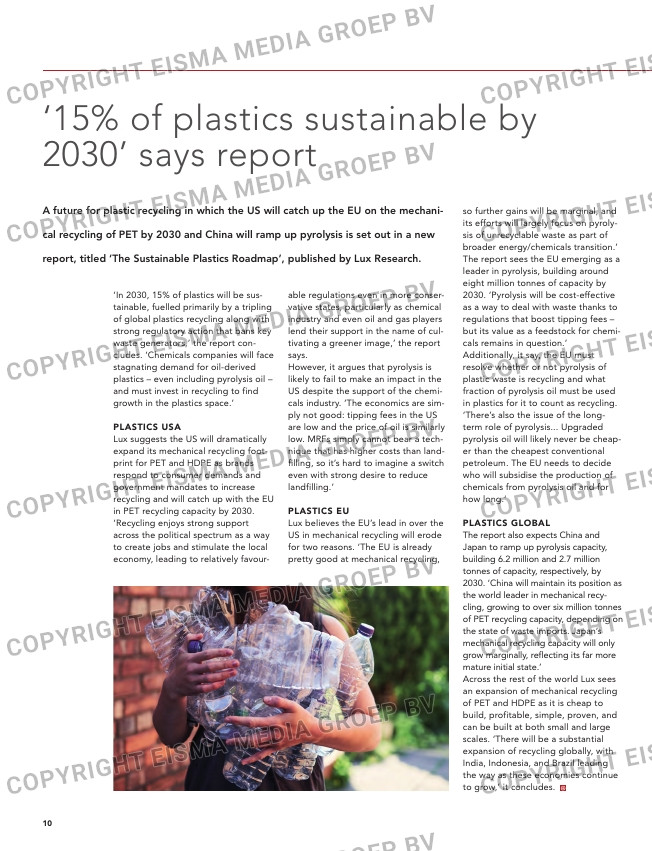 ‘In 2030, 15% of plastics will be sus-
tainable, fuelled primarily by a tripling
of global plastics recycling along with
strong regulatory action that bans key
waste generators,’ the report con-
cludes. ‘Chemicals companies will face
stagnating demand for oil-derived
plastics – even including pyrolysis oil –
and must invest in recycling to find
growth in the plastics space.’

Plastics Usa
Lux suggests the US will dramatically
expand its mechanical recycling foot-
print for PET and HDPE as brands
respond to consumer demands and
government mandates to increase
recycling and will catch up with the EU
in PET recycling capacity by 2030.
‘Recycling enjoys strong support
across the political spectrum as a way
to create jobs and stimulate the local
economy, leading to relatively favour-

able regulations even in more conser-
vative states, particularly as chemical
industry and even oil and gas players
lend their support in the name of cul-
tivating a greener image,’ the report
says.
However, it argues that pyrolysis is
likely to fail to make an impact in the
US despite the support of the chemi-
cals industry. ‘The economics are sim-
ply not good: tipping fees in the US
are low and the price of oil is similarly
low. MRFs simply cannot bear a tech-
nique that has higher costs than land-
filling, so it’s hard to imagine a switch
even with strong desire to reduce
landfilling.’

so further gains will be marginal, and
its efforts will largely focus on pyroly-
sis of unrecyclable waste as part of
broader energy/chemicals transition.’
The report sees the EU emerging as a
leader in pyrolysis, building around
eight million tonnes of capacity by
2030. ‘Pyrolysis will be cost-effective
as a way to deal with waste thanks to
regulations that boost tipping fees –
but its value as a feedstock for chemi-
cals remains in question.’
Additionally, it say, the EU must
resolve whether or not pyrolysis of
plastic waste is recycling and what
fraction of pyrolysis oil must be used
in plastics for it to count as recycling.
‘There’s also the issue of the long-
term role of pyrolysis… Upgraded
pyrolysis oil will likely never be cheap-
er than the cheapest conventional
petroleum. The EU needs to decide
who will subsidise the production of
chemicals from pyrolysis oil and for
how long.’

Plastics Global
The report also expects China and
Japan to ramp up pyrolysis capacity,
building 6.2 million and 2.7 million
tonnes of capacity, respectively, by
2030. ‘China will maintain its position as
the world leader in mechanical recy-
cling, growing to over six million tonnes
of PET recycling capacity, depending on
the state of waste imports. Japan’s
mechanical recycling capacity will only
grow marginally, reflecting its far more
mature initial state.’
Across the rest of the world Lux sees
an expansion of mechanical recycling
of PET and HDPE as it is cheap to
build, profitable, simple, proven, and
can be built at both small and large
scales. ‘There will be a substantial
expansion of recycling globally, with
India, Indonesia, and Brazil leading
the way as these economies continue
to grow,’ it concludes.

stronG dEmand for
rEcyclEd coPPEr sEEs
WiEland sEt UP shoP in
Us
Wieland north america is investing
Us$ 100 million (EUr 82.5 million) in
a new copper recycling and refining
centre in shelbyville, Kentucky.
The site, which will employ 75 people,
will leverage ‘the latest and most effi-
cient technology’ to recycle a broad
range of metals and alloys. Operations
are expected to start in late 2022.
Wieland North America is part of the
German Wieland group, which was
founded some 200 years ago. It owns
around 230 metals-related facilities
worldwide with a workforce of around
25 000. Earlier this year, the parent
company announced plans to position
its new North American headquarters
in Louisville.
With this new endeavour, Wieland
says it is taking a ‘major step’, under-
lining its commitment to sustainability
and carbon neutrality and acknowl-
edging the ‘strong demand’ for high-
recycled content metal from both its
customers and end consumers.
‘Many thanks to the state of Kentucky
and Shelby County for their tremen-
dous display of support. The given
incentives solidified our decision to
proceed with this foundational invest-
ment, which will pave the way for fur-
ther growth in recycling here,’ com-
ments company president Matt
Bedingfield. ‘We look forward to
working alongside our current and
future suppliers to find new ways to
create value together.’