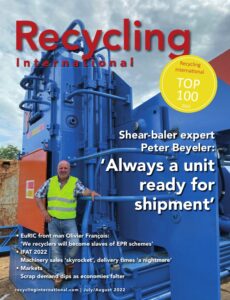 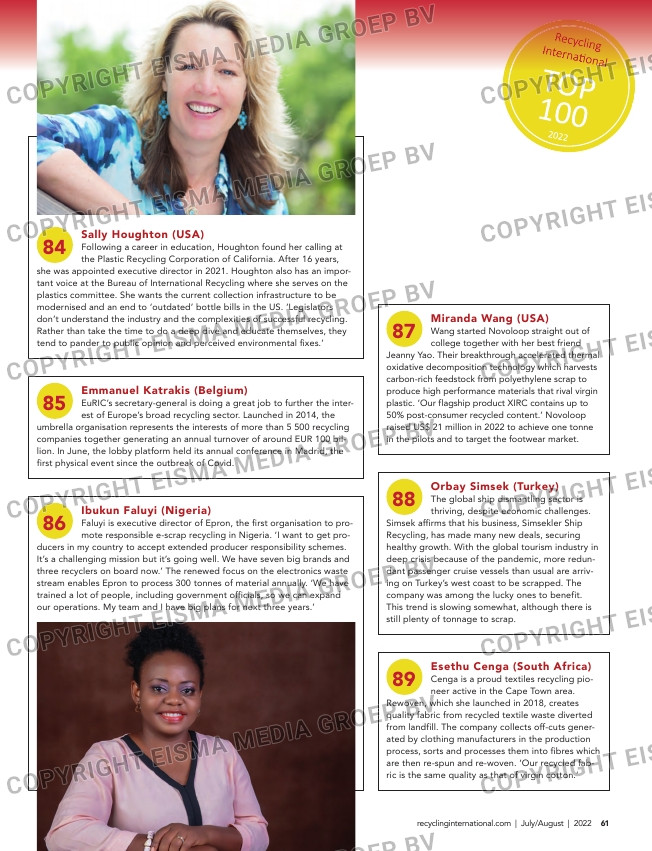 Gary Giles (UK)
Giles founded Ogel, a start-up that recycles plastic scrap into
flood prevention systems and mobile spaces such as offices. He

pitched his innovative idea on the hit TV show Dragon’s Den and the judges
were so impressed they offered £50 000 in funding to help bring Ogel to
market. Today, Giles is running a recycling workshop in the UK to produce
interlinked panels made from 100% recycled polystyrene. ‘They cannot rust
and are thick enough not to degrade or crack,’ he says. Momentum is on his
side, with Giles being nominated in two categories of the Great British
Entrepreneur Awards.

Sally Houghton (USA)
Following a career in education, Houghton found her calling at
the Plastic Recycling Corporation of California. After 16 years,

she was appointed executive director in 2021. Houghton also has an impor-
tant voice at the Bureau of International Recycling where she serves on the
plastics committee. She wants the current collection infrastructure to be
modernised and an end to ‘outdated’ bottle bills in the US. ‘Legislators
don’t understand the industry and the complexities of successful recycling.
Rather than take the time to do a deep dive and educate themselves, they
tend to pander to public opinion and perceived environmental fixes.’

Ibukun Faluyi (Nigeria)
Faluyi is executive director of Epron, the first organisation to pro-
mote responsible e-scrap recycling in Nigeria. ‘I want to get pro-

ducers in my country to accept extended producer responsibility schemes.
It’s a challenging mission but it’s going well. We have seven big brands and
three recyclers on board now.’ The renewed focus on the electronics waste
stream enables Epron to process 300 tonnes of material annually. ‘We have
trained a lot of people, including government officials, so we can expand
our operations. My team and I have big plans for next three years.’

Emmanuel Katrakis (Belgium)
EuRIC’s secretary-general is doing a great job to further the inter-
est of Europe’s broad recycling sector. Launched in 2014, the

umbrella organisation represents the interests of more than 5 500 recycling
companies together generating an annual turnover of around EUR 100 bil-
lion. In June, the lobby platform held its annual conference in Madrid, the
first physical event since the outbreak of Covid.

Jeanny Yao. Their breakthrough accelerated thermal
oxidative decomposition technology which harvests
carbon-rich feedstock from polyethylene scrap to
produce high performance materials that rival virgin
plastic. ‘Our flagship product XIRC contains up to
50% post-consumer recycled content.’ Novoloop
raised US$ 21 million in 2022 to achieve one tonne
in the pilots and to target the footwear market.

Simsek affirms that his business, Simsekler Ship
Recycling, has made many new deals, securing
healthy growth. With the global tourism industry in
deep crisis because of the pandemic, more redun-
dant passenger cruise vessels than usual are arriv-
ing on Turkey’s west coast to be scrapped. The
company was among the lucky ones to benefit.
This trend is slowing somewhat, although there is
still plenty of tonnage to scrap.

Rewoven, which she launched in 2018, creates
quality fabric from recycled textile waste diverted
from landfill. The company collects off-cuts gener-
ated by clothing manufacturers in the production
process, sorts and processes them into fibres which
are then re-spun and re-woven. ‘Our recycled fab-
ric is the same quality as that of virgin cotton.’