Download edition as PDF
Subscribe
A U T H O R S Kirstin Linnenkoper, Martijn Reintjes 50 Kyle Wiens, founder of iFixit (USA) There is probably no one else in the industry who has taken apart as many devices as tech expert Wiens. The founder of iFixit has built a gl...
Read the entire page 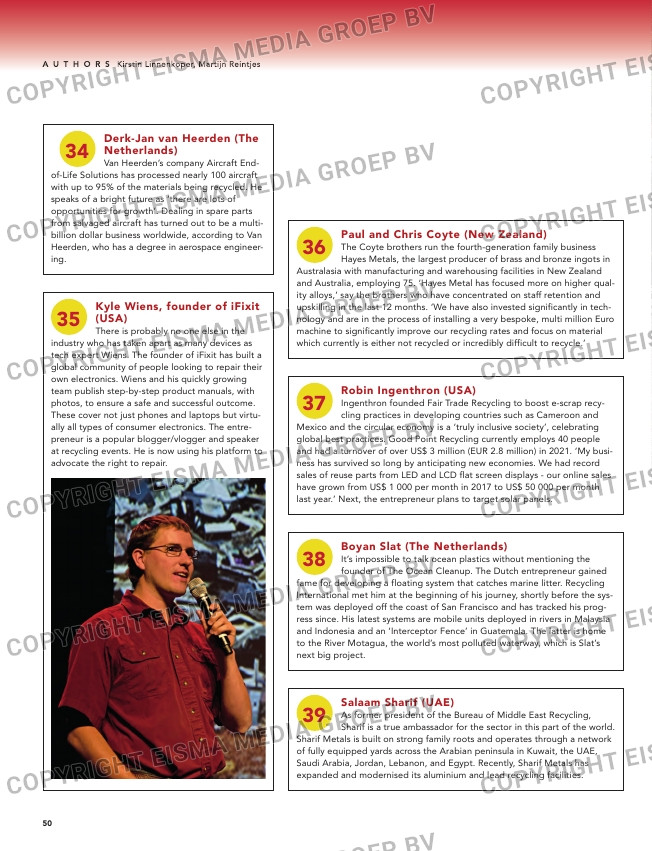 Kyle Wiens, founder of iFixit
(USA)
There is probably no one else in the

industry who has taken apart as many devices as
tech expert Wiens. The founder of iFixit has built a
global community of people looking to repair their
own electronics. Wiens and his quickly growing
team publish step-by-step product manuals, with
photos, to ensure a safe and successful outcome.
These cover not just phones and laptops but virtu-
ally all types of consumer electronics. The entre-
preneur is a popular blogger/vlogger and speaker
at recycling events. He is now using his platform to
advocate the right to repair.

Australasia with manufacturing and warehousing facilities in New Zealand
and Australia, employing 75. ‘Hayes Metal has focused more on higher qual-
ity alloys,’ say the brothers who have concentrated on staff retention and
upskilling in the last 12 months. ‘We have also invested significantly in tech-
nology and are in the process of installing a very bespoke, multi million Euro
machine to significantly improve our recycling rates and focus on material
which currently is either not recycled or incredibly difficult to recycle.’

Mexico and the circular economy is a ‘truly inclusive society’, celebrating
global best practices. Good Point Recycling currently employs 40 people
and had a turnover of over US$ 3 million (EUR 2.8 million) in 2021. ‘My busi-
ness has survived so long by anticipating new economies. We had record
sales of reuse parts from LED and LCD flat screen displays – our online sales
have grown from US$ 1 000 per month in 2017 to US$ 50 000 per month
last year.’ Next, the entrepreneur plans to target solar panels.

Boyan Slat (The Netherlands)
It’s impossible to talk ocean plastics without mentioning the
founder of The Ocean Cleanup. The Dutch entrepreneur gained

fame for developing a floating system that catches marine litter. Recycling
International met him at the beginning of his journey, shortly before the sys-
tem was deployed off the coast of San Francisco and has tracked his prog-
ress since. His latest systems are mobile units deployed in rivers in Malaysia
and Indonesia and an ‘Interceptor Fence’ in Guatemala. The latter is home
to the River Motagua, the world’s most polluted waterway, which is Slat’s
next big project.

Salaam Sharif (UAE)
As former president of the Bureau of Middle East Recycling,
Sharif is a true ambassador for the sector in this part of the world.

Sharif Metals is built on strong family roots and operates through a network
of fully equipped yards across the Arabian peninsula in Kuwait, the UAE,
Saudi Arabia, Jordan, Lebanon, and Egypt. Recently, Sharif Metals has
expanded and modernised its aluminium and lead recycling facilities.

of-Life Solutions has processed nearly 100 aircraft
with up to 95% of the materials being recycled. He
speaks of a bright future as ‘there are lots of
opportunities for growth’. Dealing in spare parts
from salvaged aircraft has turned out to be a multi-
billion dollar business worldwide, according to Van
Heerden, who has a degree in aerospace engineer-
ing.

he has always company news to share. Latest from the Scandinavian recy-
cling major is a EUR 20 million investment in new technology to further
improve scrap quality. ‘It’s our response to the EU Green Deal. With ever-
strict regulation and the growing demand for cleaner materials, there is no
other choice than to take responsibility if you want to stay in business.’

Raymond Onovwigun (Nigeria/UK)
‘Only 1% of the world’s recycled metals comes from the African
continent,’ says Onovwigun, ceo of Romco Metals. His company,

headquartered in London, is hoping to boost that figure with a new recy-
cling plant in Ghana. ‘I have ambitious plans for further expansion,’ he adds.
Romco Metals recycles more than 5 000 tonnes of non-ferrous scrap per
quarter. The metals, mostly aluminium and copper, are sold to companies
around the world, including major automotive manufacturers. Onovwigun
reports that revenues, at US$ 8.1 million in Q1 of this year, are up for the
seventh consecutive year while production increased 112%.