Download edition as PDF
Subscribe
34 on one machine? ‘Sure, but that’s our job,’ Beyeler replies. ‘We promise to deliver high quality, custom-made solu- tions. If this is what the customer wants, we’re there to serve his needs.’ STRONG IN EUROPE IUT Beyeler...
Read the entire page 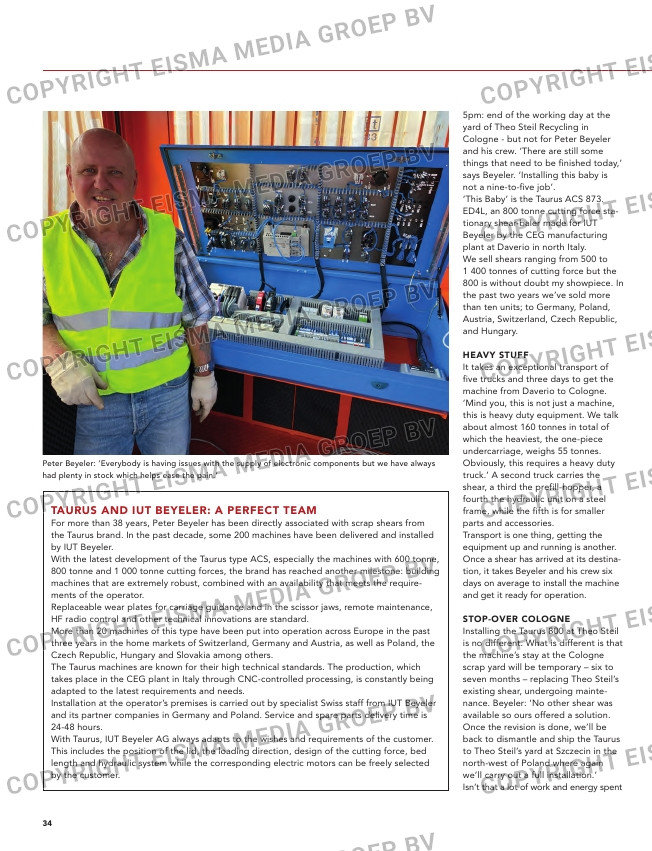 on one machine? ‘Sure, but that’s our
job,’ Beyeler replies. ‘We promise to
deliver high quality, custom-made solu-
tions. If this is what the customer wants,
we’re there to serve his needs.’

STRONG IN EUROPE
IUT Beyeler is an established name in
the world of heavyweight recycling
equipment. In the past decade alone,
Beyeler has installed more than 200
Taurus shear balers, mostly in
Germany (40) and Poland (20) but also
in his home country Switzerland.
IUT Beyeler is responsible for sales,
installation and technical support of
the Taurus brand in the German
speaking markets and Eastern Europe.
Some 20 machines were delivered to
customers in Russia, but ‘for obvious
reasons’ that market has come to a
standstill, says Beyeler.
The company has spare part stocks
and dedicated service teams in
Poland, Germany and Switzerland
ready to respond within 24-48 hours.

CHALLENGING TIMES
Asked how worldwide parts shortages
affect his business, the shear-baler
expert says: ‘We hardly see any
impact. Sure, everybody is having
issues with the supply of electronic
components but we have always had
plenty of parts in stock which, crisis or
no crisis, helps ease the pain.’
As with fellow recycling equipment sup-
pliers, Beyeler is seeing some delivery
delays but nothing drastic. ‘Compared
to many others we’re still doing pretty
well,’ he says. ‘We’re lucky to have a
smooth and effective production. As I
always say: “We always have a machine
ready for shipment”.’

20-30% UP
What about pricing? ‘As we’ve all
seen, resources have become more
scarce and more expensive which
has its impact on the cost of manufac-
ture. For example, 10 mm steel plates
used in our equipment have tripled in
cost. We have no other choice than to
pass on these extra costs. I dare say in
two years’ recycling machines will
have become up to 30% more expen-
sive.’

5pm: end of the working day at the
yard of Theo Steil Recycling in
Cologne – but not for Peter Beyeler
and his crew. ‘There are still some
things that need to be finished today,’
says Beyeler. ‘Installing this baby is
not a nine-to-five job’.
‘This Baby’ is the Taurus ACS 873.
ED4L, an 800 tonne cutting force sta-
tionary shear-baler made for IUT
Beyeler by the CEG manufacturing
plant at Daverio in north Italy.
We sell shears ranging from 500 to
1 400 tonnes of cutting force but the
800 is without doubt my showpiece. In
the past two years we’ve sold more
than ten units; to Germany, Poland,
Austria, Switzerland, Czech Republic,
and Hungary.

HEAVY STUFF
It takes an exceptional transport of
five trucks and three days to get the
machine from Daverio to Cologne.
‘Mind you, this is not just a machine,
this is heavy duty equipment. We talk
about almost 160 tonnes in total of
which the heaviest, the one-piece
undercarriage, weighs 55 tonnes.
Obviously, this requires a heavy duty
truck.’ A second truck carries the
shear, a third the prefill-hopper, a
fourth the hydraulic unit on a steel
frame, while the fifth is for smaller
parts and accessories.
Transport is one thing, getting the
equipment up and running is another.
Once a shear has arrived at its destina-
tion, it takes Beyeler and his crew six
days on average to install the machine
and get it ready for operation.

STOP-OVER COLOGNE
Installing the Taurus 800 at Theo Steil
is no different. What is different is that
the machine’s stay at the Cologne
scrap yard will be temporary – six to
seven months – replacing Theo Steil’s
existing shear, undergoing mainte-
nance. Beyeler: ‘No other shear was
available so ours offered a solution.
Once the revision is done, we’ll be
back to dismantle and ship the Taurus
to Theo Steil’s yard at Szczecin in the
north-west of Poland where again
we’ll carry out a full installation.’
Isn’t that a lot of work and energy spent

TAURUS AND IUT BEYELER: A PERFECT TEAM
For more than 38 years, Peter Beyeler has been directly associated with scrap shears from
the Taurus brand. In the past decade, some 200 machines have been delivered and installed
by IUT Beyeler.
With the latest development of the Taurus type ACS, especially the machines with 600 tonne,
800 tonne and 1 000 tonne cutting forces, the brand has reached another milestone: building
machines that are extremely robust, combined with an availability that meets the require-
ments of the operator.
Replaceable wear plates for carriage guidance and in the scissor jaws, remote maintenance,
HF radio control and other technical innovations are standard.
More than 20 machines of this type have been put into operation across Europe in the past
three years in the home markets of Switzerland, Germany and Austria, as well as Poland, the
Czech Republic, Hungary and Slovakia among others.
The Taurus machines are known for their high technical standards. The production, which
takes place in the CEG plant in Italy through CNC-controlled processing, is constantly being
adapted to the latest requirements and needs.
Installation at the operator’s premises is carried out by specialist Swiss staff from IUT Beyeler
and its partner companies in Germany and Poland. Service and spare parts delivery time is
24-48 hours.
With Taurus, IUT Beyeler AG always adapts to the wishes and requirements of the customer.
This includes the position of the lid, the loading direction, design of the cutting force, bed
length and hydraulic system while the corresponding electric motors can be freely selected
by the customer.

Peter Beyeler: ‘Everybody is having issues with the supply of electronic components but we have always
had plenty in stock which helps ease the pain.’