Download edition as PDF
Subscribe
CONFERENCE REPORT 29recyclinginternational.com | July/August | 2022 saw as an attack on recycling was being increasingly enshrined in the laws and policies directly impacting the industry. And he urged members not to ‘sleepwalk i...
Read the entire page 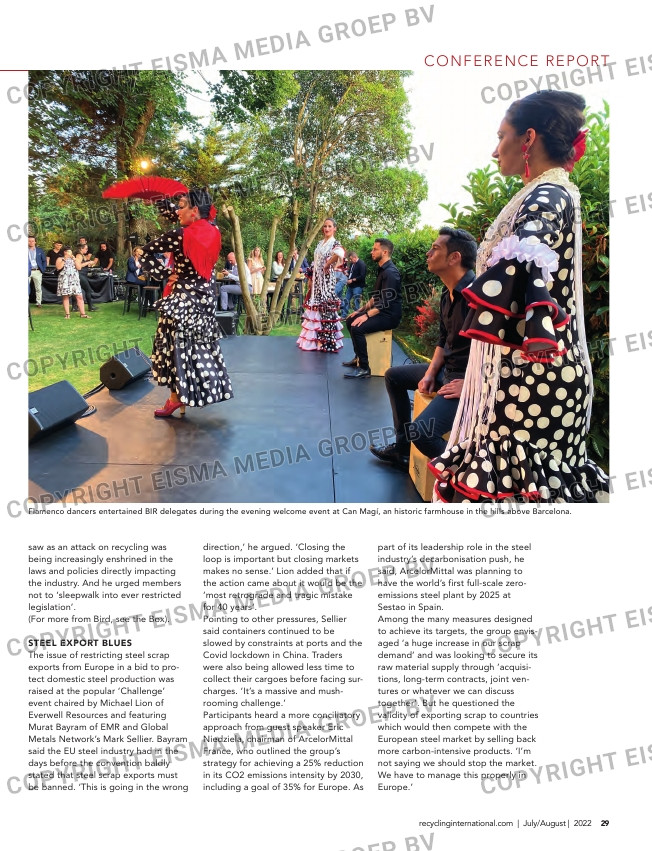 saw as an attack on recycling was
being increasingly enshrined in the
laws and policies directly impacting
the industry. And he urged members
not to ‘sleepwalk into ever restricted
legislation’.
(For more from Bird, see the Box).

STEEL EXPORT BLUES
The issue of restricting steel scrap
exports from Europe in a bid to pro-
tect domestic steel production was
raised at the popular ‘Challenge’
event chaired by Michael Lion of
Everwell Resources and featuring
Murat Bayram of EMR and Global
Metals Network’s Mark Sellier. Bayram
said the EU steel industry had in the
days before the convention baldly
stated that steel scrap exports must
be banned. ‘This is going in the wrong

direction,’ he argued. ‘Closing the
loop is important but closing markets
makes no sense.’ Lion added that if
the action came about it would be the
‘most retrograde and tragic mistake
for 40 years’.
Pointing to other pressures, Sellier
said containers continued to be
slowed by constraints at ports and the
Covid lockdown in China. Traders
were also being allowed less time to
collect their cargoes before facing sur-
charges. ‘It’s a massive and mush-
rooming challenge.’
Participants heard a more conciliatory
approach from guest speaker Eric
Niedziela, chairman of ArcelorMittal
France, who outlined the group’s
strategy for achieving a 25% reduction
in its CO2 emissions intensity by 2030,
including a goal of 35% for Europe. As

part of its leadership role in the steel
industry’s decarbonisation push, he
said, ArcelorMittal was planning to
have the world’s first full-scale zero-
emissions steel plant by 2025 at
Sestao in Spain.
Among the many measures designed
to achieve its targets, the group envis-
aged ‘a huge increase in our scrap
demand’ and was looking to secure its
raw material supply through ‘acquisi-
tions, long-term contracts, joint ven-
tures or whatever we can discuss
together’. But he questioned the
validity of exporting scrap to countries
which would then compete with the
European steel market by selling back
more carbon-intensive products. ‘I’m
not saying we should stop the market.
We have to manage this properly in
Europe.’

Flamenco dancers entertained BIR delegates during the evening welcome event at Can Magí, an historic farmhouse in the hills above Barcelona.