Download edition as PDF
Subscribe
28 Passion plays out in Barcelona Waste shipment regulations, restrictions on steel exports and a personal experi- ence of the war in Ukraine all featured at BIR’s first physical convention since 2019, which attracted 1 300 participa...
Read the entire page 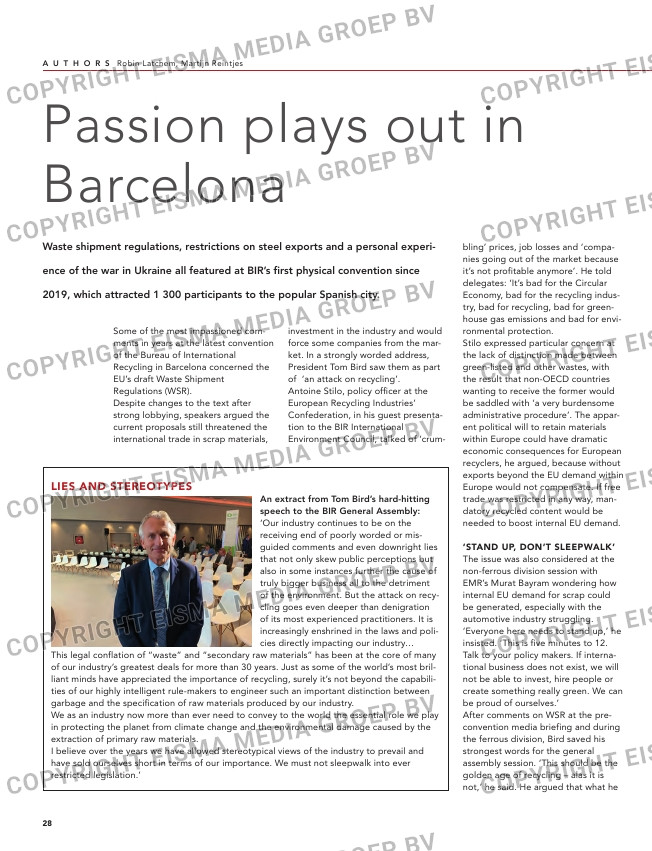 Passion plays out in
Barcelona
Waste shipment regulations, restrictions on steel exports and a personal experi-

2019, which attracted 1 300 participants to the popular Spanish city.

saw as an attack on recycling was
being increasingly enshrined in the
laws and policies directly impacting
the industry. And he urged members
not to ‘sleepwalk into ever restricted
legislation’.
(For more from Bird, see the Box).

STEEL EXPORT BLUES
The issue of restricting steel scrap
exports from Europe in a bid to pro-
tect domestic steel production was
raised at the popular ‘Challenge’
event chaired by Michael Lion of
Everwell Resources and featuring
Murat Bayram of EMR and Global
Metals Network’s Mark Sellier. Bayram
said the EU steel industry had in the
days before the convention baldly
stated that steel scrap exports must
be banned. ‘This is going in the wrong

Some of the most impassioned com-
ments in years at the latest convention
of the Bureau of International
Recycling in Barcelona concerned the
EU’s draft Waste Shipment
Regulations (WSR).
Despite changes to the text after
strong lobbying, speakers argued the
current proposals still threatened the
international trade in scrap materials,

investment in the industry and would
force some companies from the mar-
ket. In a strongly worded address,
President Tom Bird saw them as part
of ‘an attack on recycling’.
Antoine Stilo, policy officer at the
European Recycling Industries’
Confederation, in his guest presenta-
tion to the BIR International
Environment Council, talked of ‘crum-

bling’ prices, job losses and ‘compa-
nies going out of the market because
it’s not profitable anymore’. He told
delegates: ‘It’s bad for the Circular
Economy, bad for the recycling indus-
try, bad for recycling, bad for green-
house gas emissions and bad for envi-
ronmental protection.
Stilo expressed particular concern at
the lack of distinction made between
green-listed and other wastes, with
the result that non-OECD countries
wanting to receive the former would
be saddled with ‘a very burdensome
administrative procedure’. The appar-
ent political will to retain materials
within Europe could have dramatic
economic consequences for European
recyclers, he argued, because without
exports beyond the EU demand within
Europe would not compensate. If free
trade was restricted in any way, man-
datory recycled content would be
needed to boost internal EU demand.

‘STAND UP, DON’T SLEEPWALK’
The issue was also considered at the
non-ferrous division session with
EMR’s Murat Bayram wondering how
internal EU demand for scrap could
be generated, especially with the
automotive industry struggling.
‘Everyone here needs to stand up,’ he
insisted. ‘This is five minutes to 12.
Talk to your policy makers. If interna-
tional business does not exist, we will
not be able to invest, hire people or
create something really green. We can
be proud of ourselves.’
After comments on WSR at the pre-
convention media briefing and during
the ferrous division, Bird saved his
strongest words for the general
assembly session. ‘This should be the
golden age of recycling – alas it is
not,’ he said. He argued that what he

Flamenco dancers entertained BIR delegates during the evening welcome event at Can Magí, an historic farmhouse in the hills above Barcelona.

LIES AND STEREOTYPES
An extract from Tom Bird’s hard-hitting
speech to the BIR General Assembly:
‘Our industry continues to be on the
receiving end of poorly worded or mis-
guided comments and even downright lies
that not only skew public perceptions but
also in some instances further the cause of
truly bigger business all to the detriment
of the environment. But the attack on recy-
cling goes even deeper than denigration
of its most experienced practitioners. It is
increasingly enshrined in the laws and poli-
cies directly impacting our industry…

This legal conflation of “waste” and “secondary raw materials” has been at the core of many
of our industry’s greatest deals for more than 30 years. Just as some of the world’s most bril-
liant minds have appreciated the importance of recycling, surely it’s not beyond the capabili-
ties of our highly intelligent rule-makers to engineer such an important distinction between
garbage and the specification of raw materials produced by our industry.
We as an industry now more than ever need to convey to the world the essential role we play
in protecting the planet from climate change and the environmental damage caused by the
extraction of primary raw materials.
I believe over the years we have allowed stereotypical views of the industry to prevail and
have sold ourselves short in terms of our importance. We must not sleepwalk into ever
restricted legislation.’