Download edition as PDF
Subscribe
16 Decades of growth back a business looking to the future Sackers has an international reputation built on very local roots. The UK recycler’s ceo David Dodds talks to Recycling international about the early days, innovation and p...
Read the entire page 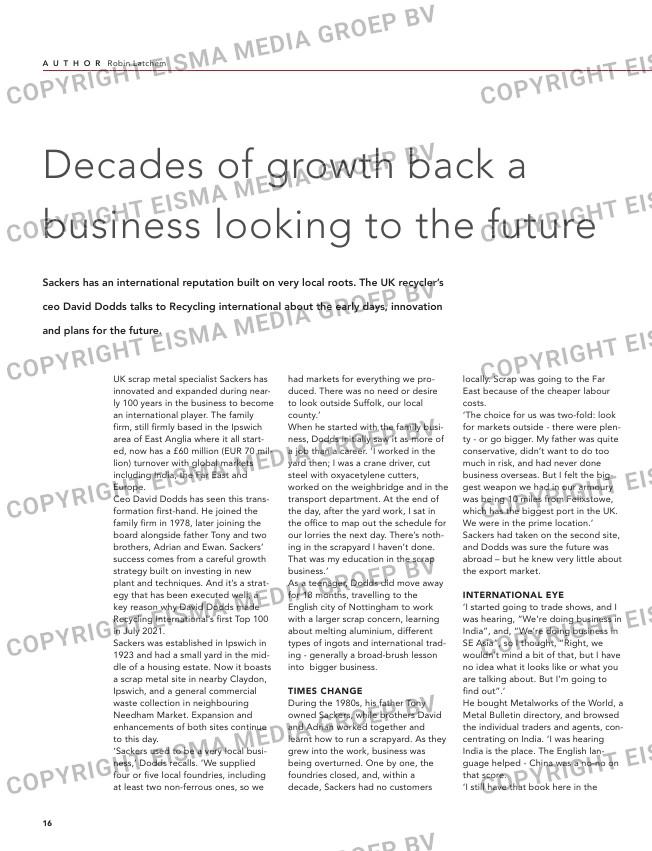 Decades of growth back a

business looking to the future
Sackers has an international reputation built on very local roots. The UK recycler’s

and plans for the future.

office. I used to finish my work in the
yard and then come into the office
and type up letters. I found the fax
number and faxed people over several
years. I had no clue what I was doing,
not a clue. I hadn’t been exposed to
any international business.’
Eventually, he struck gold. The first
customer was an agent, MG India.
‘Sridhar, who now owns the business,
remains my longest, dearest friend in
India and has been for well over 20
years now. I’ve been invited to his
wedding and his children’s weddings.
He’s now a grandfather, as I am, and
it’s a really close relationship. Another

UK scrap metal specialist Sackers has
innovated and expanded during near-
ly 100 years in the business to become
an international player. The family
firm, still firmly based in the Ipswich
area of East Anglia where it all start-
ed, now has a £60 million (EUR 70 mil-
lion) turnover with global markets
including India, the Far East and
Europe.
Ceo David Dodds has seen this trans-
formation first-hand. He joined the
family firm in 1978, later joining the
board alongside father Tony and two
brothers, Adrian and Ewan. Sackers’
success comes from a careful growth
strategy built on investing in new
plant and techniques. And it’s a strat-
egy that has been executed well, a
key reason why David Dodds made
Recycling International’s first Top 100
in July 2021.
Sackers was established in Ipswich in
1923 and had a small yard in the mid-
dle of a housing estate. Now it boasts
a scrap metal site in nearby Claydon,
Ipswich, and a general commercial
waste collection in neighbouring
Needham Market. Expansion and
enhancements of both sites continue
to this day.
‘Sackers used to be a very local busi-
ness,’ Dodds recalls. ‘We supplied
four or five local foundries, including
at least two non-ferrous ones, so we

had markets for everything we pro-
duced. There was no need or desire
to look outside Suffolk, our local
county.’
When he started with the family busi-
ness, Dodds initially saw it as more of
a job than a career. ‘I worked in the
yard then; I was a crane driver, cut
steel with oxyacetylene cutters,
worked on the weighbridge and in the
transport department. At the end of
the day, after the yard work, I sat in
the office to map out the schedule for
our lorries the next day. There’s noth-
ing in the scrapyard I haven’t done.
That was my education in the scrap
business.’
As a teenager, Dodds did move away
for 18 months, travelling to the
English city of Nottingham to work
with a larger scrap concern, learning
about melting aluminium, different
types of ingots and international trad-
ing – generally a broad-brush lesson
into bigger business.

TIMES CHANGE
During the 1980s, his father Tony
owned Sackers, while brothers David
and Adrian worked together and
learnt how to run a scrapyard. As they
grew into the work, business was
being overturned. One by one, the
foundries closed, and, within a
decade, Sackers had no customers

David Dodds joined the family firm in 1978. ‘There’s nothing in the scrapyard I haven’t done.’

locally. Scrap was going to the Far
East because of the cheaper labour
costs.
‘The choice for us was two-fold: look
for markets outside – there were plen-
ty – or go bigger. My father was quite
conservative, didn’t want to do too
much in risk, and had never done
business overseas. But I felt the big-
gest weapon we had in our armoury
was being 10 miles from Felixstowe,
which has the biggest port in the UK.
We were in the prime location.’
Sackers had taken on the second site,
and Dodds was sure the future was
abroad – but he knew very little about
the export market.

INTERNATIONAL EYE
‘I started going to trade shows, and I
was hearing, “We’re doing business in
India”, and, “We’re doing business in
SE Asia”, so I thought, “Right, we
wouldn’t mind a bit of that, but I have
no idea what it looks like or what you
are talking about. But I’m going to
find out”.’
He bought Metalworks of the World, a
Metal Bulletin directory, and browsed
the individual traders and agents, con-
centrating on India. ‘I was hearing
India is the place. The English lan-
guage helped – China was a no-no on
that score.
‘I still have that book here in the