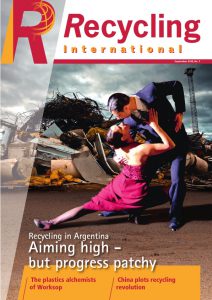 Subscribe
17September 2010 Over recent years, tentative steps have been taken to establish recycling more firmly in Argentina’s national psyche. This scene- setting article looks at the country itself and its waste management/ recycling framew...
Read the entire page Over recent years, tentative steps have been taken to establish

setting article looks at the country itself and its waste management/

recycling framework; in a second article to be published in next

month’s issue of Recycling International, the spotlight switches to

During my fl ight from Amsterdam to Buenos Aires, I was reading a book on recycling
technology when someone tapped me on the

shoulder and asked me about my interest in the

subject. After hearing me explain that I was going

to write an article on recycling in Argentina, he

revealed himself to be Erik de Baedts, a board

ciation (ISWA). Subsequently, he was kind

enough to introduce me to Atilio Savino, Argen-

tina’s former Secretary of Environment and

President of ISWA – and that’s how my work on

this feature got off to an auspicious start.

During my early days in Buenos Aires, however,

I had my doubts whether a feature on recycling

in Argentina would be feasible. When asked

about recycling in his country, one person I met

there started to laugh and said: ‘We don’t do

and social instability in the country, recycling is

not a priority for Argentineans, he said.

His observation seems to be slightly exagger-

ated. While the so-called ‘cartoneros’- people

who collect and separate waste on the streets

– seem to represent the biggest single factor in

are being undertaken in several provinces and

some private companies are also involved in

this sphere of activity.

Crunches not uncommon
When Argentineans speak of monetary and eco-

nomic crisis, they mostly refer to the crisis of 2001

instead of the credit crunch beginning in Septem-

ber 2008. Economic crunches are not uncommon

in Argentina. The crises witnessed in the country

over the last century have been caused by persist-

However, the 2001 crisis is considered to have

been the most serious and was provoked by a

and external indebtedness, and also a bank run.

Governments responded by freezing savings and

international transactions were no longer pos-

sible. This also meant that Argentina was no

longer able to meet her foreign debts. At the

almost 60% of Argentineans were living below

the poverty line. During mid-2002, the country’s

on to grow at an average of 9% per annum over

the ensuing fi ve years. But Argentina has been

Economic growth since the second half of 2002

has been attributed to the cheap peso and high

ment has been necessary to cement this growth

but, as a result of the earlier crisis, many inves-

With the current administration in Argentina

looking to stabilise the domestic economy, an

increase in foreign investment is not expected

until structural, institutional and economic

change has been completed.

Impact on recycling
Newspapers reported last year that the credit

crunch had affected collection rates because of

the dramatic fall in prices paid for recyclables. For

example, the value of cardboard dropped from

According to CEAMSE, a government agency

responsible for municipal solid waste in the

reduced by 15-20% but have since returned to

between the national government and provin-

cial governments. As a result, there is environ-

cial and local level (for example, for the City of

between the provinces but the biggest com-

plaint with regard to the current framework is

that regulations are not enforced.

islation came in the 1994 reform of the country’s

constitution. Article 41 sets down the right for

the country’s inhabitants to a safe and balanced

environment, as well as a duty to preserve the

environment. In cases where actions lead to envi-

ronmental harm, there is an obligation to repair

that damage in line with the law. The same arti-

islation, laying down rules for a minimum

agement of the environment, preservation and

protection of biodiversity and the implementa-

tion of sustainable development. A section of

this law sets out the ‘polluter pays principle’

such that, in cases where there are no technical

damage, the polluter will be obliged to pay an

amount determined by the courts into the

there have been few cases of persons being

but progress patchy
CEAMSE’s recycling plants were created to prevent waste picking on
the landfills and currently employ around 500 people.

Recycling in Argentina (part I)

Newspapers reported last year that the credit crunch had affected col-
lection rates because of the dramatic fall in prices paid for recyclables.