Subscribe
8 2020 Techtalks Battery-proof transport solution made of 100% recycled PP Transporting lithium-ion batteries is not without its dan- gers because they can react with various substances, over- heat, catch fire or even explode. As a resu...
Read the entire page 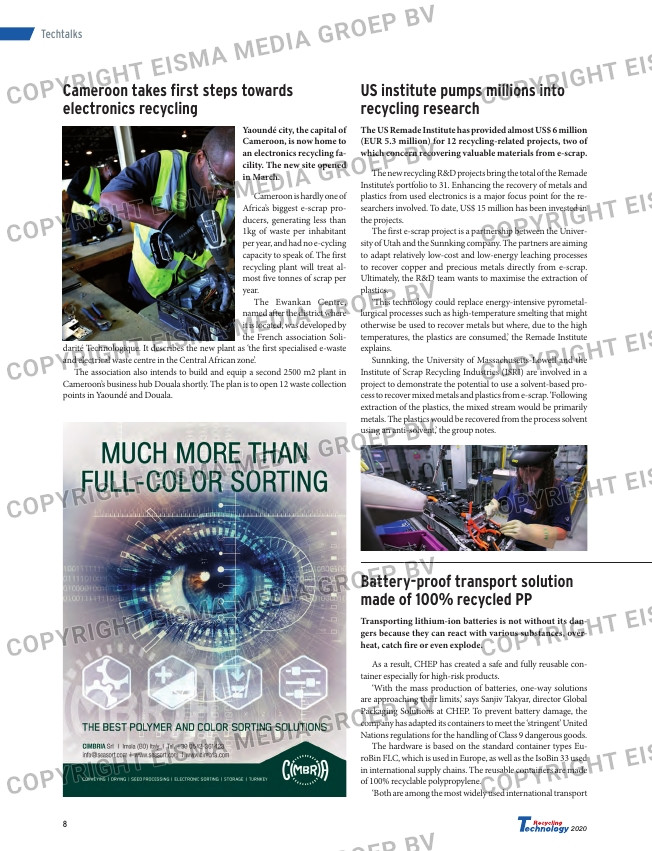 Battery-proof transport solution
made of 100% recycled PP
Transporting lithium-ion batteries is not without its dan-
gers because they can react with various substances, over-
heat, catch fire or even explode.

As a result, CHEP has created a safe and fully reusable con-
tainer especially for high-risk products.

‘With the mass production of batteries, one-way solutions
are approaching their limits,’ says Sanjiv Takyar, director Global
Packaging Solutions at CHEP. To prevent battery damage, the
company has adapted its containers to meet the ‘stringent’ United
Nations regulations for the handling of Class 9 dangerous goods.

The hardware is based on the standard container types Eu-
roBin FLC, which is used in Europe, as well as the IsoBin 33 used
in international supply chains. The reusable containers are made
of 100% recyclable polypropylene.

‘Both are among the most widely used international transport

US institute pumps millions into
recycling research
The US Remade Institute has provided almost US$ 6 million
(EUR 5.3 million) for 12 recycling-related projects, two of
which concern recovering valuable materials from e-scrap.

The new recycling R&D projects bring the total of the Remade
Institute’s portfolio to 31. Enhancing the recovery of metals and
plastics from used electronics is a major focus point for the re-
searchers involved. To date, US$ 15 million has been invested in
the projects.

The first e-scrap project is a partnership between the Univer-
sity of Utah and the Sunnking company. The partners are aiming
to adapt relatively low-cost and low-energy leaching processes
to recover copper and precious metals directly from e-scrap.
Ultimately, the R&D team wants to maximise the extraction of
plastics.

‘This technology could replace energy-intensive pyrometal-
lurgical processes such as high-temperature smelting that might
otherwise be used to recover metals but where, due to the high
temperatures, the plastics are consumed,’ the Remade Institute
explains.

Sunnking, the University of Massachusetts-Lowell and the
Institute of Scrap Recycling Industries (ISRI) are involved in a
project to demonstrate the potential to use a solvent-based pro-
cess to recover mixed metals and plastics from e-scrap. ‘Following
extraction of the plastics, the mixed stream would be primarily
metals. The plastics would be recovered from the process solvent
using an anti-solvent,’ the group notes.

Yaoundé city, the capital of
Cameroon, is now home to
an electronics recycling fa-
cility. The new site opened
in March.

Cameroon is hardly one of
Africa’s biggest e-scrap pro-
ducers, generating less than
1kg of waste per inhabitant
per year, and had no e-cycling
capacity to speak of. The first
recycling plant will treat al-
most five tonnes of scrap per
year.

The Ewankan Centre,
named after the district where
it is located, was developed by
the French association Soli-

darité Technologique. It describes the new plant as ‘the first specialised e-waste
and electrical waste centre in the Central African zone’.

The association also intends to build and equip a second 2500 m2 plant in
Cameroon’s business hub Douala shortly. The plan is to open 12 waste collection
points in Yaoundé and Douala.