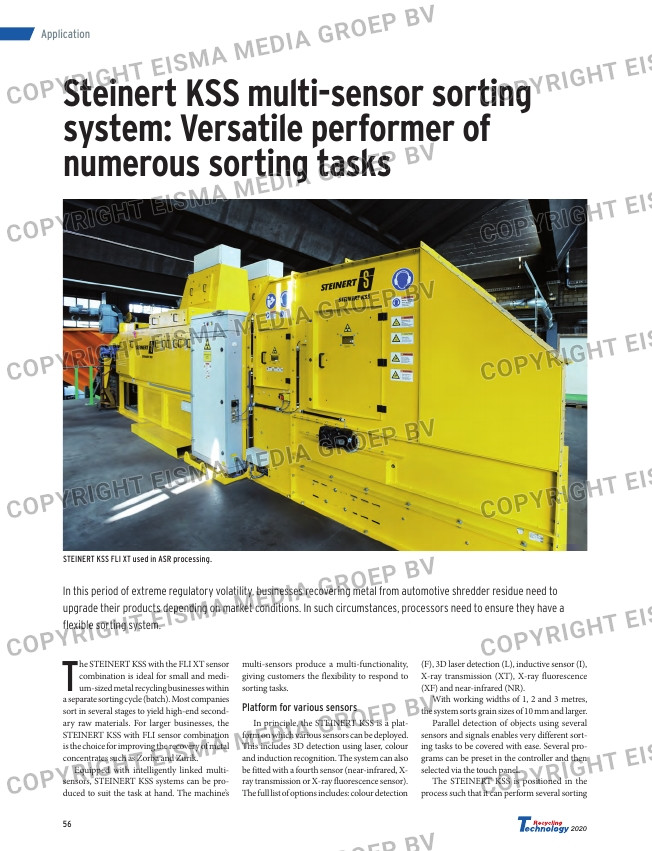 In this period of extreme regulatory volatility, businesses recovering metal from automotive shredder residue need to
upgrade their products depending on market conditions. In such circumstances, processors need to ensure they have a
flexible sorting system.

a separate sorting cycle (batch). Most companies
sort in several stages to yield high-end second-
ary raw materials. For larger businesses, the
STEINERT KSS with FLI sensor combination
is the choice for improving the recovery of metal
concentrates such as Zorba and Zurik.

Equipped with intelligently linked multi-
sensors, STEINERT KSS systems can be pro-
duced to suit the task at hand. The machine’s

multi-sensors produce a multi-functionality,
giving customers the flexibility to respond to
sorting tasks.

Platform for various sensors
In principle, the STEINERT KSS is a plat-

form on which various sensors can be deployed.
This includes 3D detection using laser, colour
and induction recognition. The system can also
be fitted with a fourth sensor (near-infrared, X-
ray transmission or X-ray fluorescence sensor).
The full list of options includes: colour detection

With working widths of 1, 2 and 3 metres,
the system sorts grain sizes of 10 mm and larger.

Parallel detection of objects using several
sensors and signals enables very different sort-
ing tasks to be covered with ease. Several pro-
grams can be preset in the controller and then
selected via the touch panel.