Subscribe
50 2020 Application Establishing the complete ELV/WEEE plastic recycling chain in Japan In 2018, Japan exported just over a million tons of plastics to other parts of Asia, down from 1.43 million tons in the previous year. This sudden d...
Read the entire page 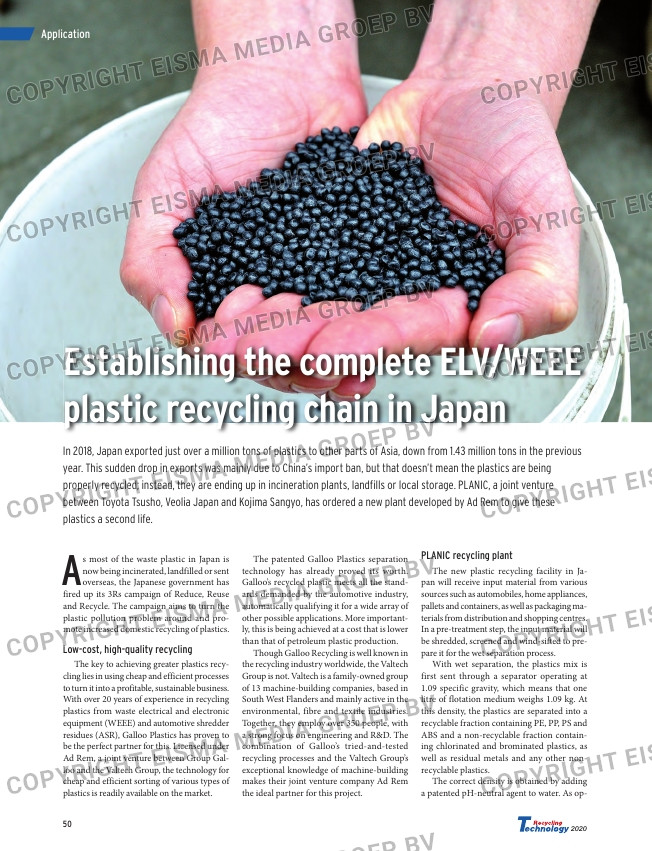 Establishing the complete ELV/WEEE
plastic recycling chain in Japan
In 2018, Japan exported just over a million tons of plastics to other parts of Asia, down from 1.43 million tons in the previous
year. This sudden drop in exports was mainly due to China’s import ban, but that doesn’t mean the plastics are being
properly recycled; instead, they are ending up in incineration plants, landfills or local storage. PLANIC, a joint venture
between Toyota Tsusho, Veolia Japan and Kojima Sangyo, has ordered a new plant developed by Ad Rem to give these
plastics a second life.

A
s most of the waste plastic in Japan is
now being incinerated, landfilled or sent
overseas, the Japanese government has

fired up its 3Rs campaign of Reduce, Reuse
and Recycle. The campaign aims to turn the
plastic pollution problem around and pro-
mote increased domestic recycling of plastics.

cling lies in using cheap and efficient processes
to turn it into a profitable, sustainable business.
With over 20 years of experience in recycling
plastics from waste electrical and electronic
equipment (WEEE) and automotive shredder
residues (ASR), Galloo Plastics has proven to
be the perfect partner for this. Licensed under
Ad Rem, a joint venture between Group Gal-
loo and the Valtech Group, the technology for
cheap and efficient sorting of various types of
plastics is readily available on the market.

The patented Galloo Plastics separation
technology has already proved its worth.
Galloo’s recycled plastic meets all the stand-
ards demanded by the automotive industry,
automatically qualifying it for a wide array of
other possible applications. More important-
ly, this is being achieved at a cost that is lower
than that of petroleum plastic production.

Though Galloo Recycling is well known in
the recycling industry worldwide, the Valtech
Group is not. Valtech is a family-owned group
of 13 machine-building companies, based in
South West Flanders and mainly active in the
environmental, fibre and textile industries.
Together, they employ over 350 people, with
a strong focus on engineering and R&D. The
combination of Galloo’s tried-and-tested
recycling processes and the Valtech Group’s
exceptional knowledge of machine-building
makes their joint venture company Ad Rem
the ideal partner for this project.

pan will receive input material from various
sources such as automobiles, home appliances,
pallets and containers, as well as packaging ma-
terials from distribution and shopping centres.
In a pre-treatment step, the input material will
be shredded, screened and wind-sifted to pre-
pare it for the wet separation process.

The correct density is obtained by adding
a patented pH-neutral agent to water. As op-