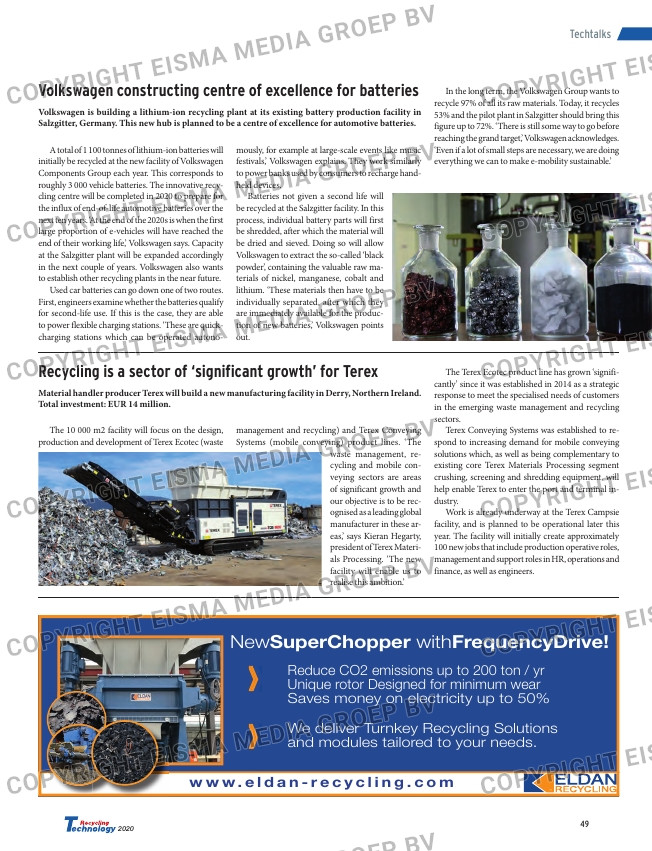 The 10 000 m2 facility will focus on the design,
production and development of Terex Ecotec (waste

waste management, re-
cycling and mobile con-
veying sectors are areas
of significant growth and
our objective is to be rec-
ognised as a leading global
manufacturer in these ar-
eas,’ says Kieran Hegarty,
president of Terex Materi-
als Processing. ‘The new
facility will enable us to
realise this ambition.’

The Terex Ecotec product line has grown ‘signifi-
cantly’ since it was established in 2014 as a strategic
response to meet the specialised needs of customers
in the emerging waste management and recycling
sectors.

Terex Conveying Systems was established to re-
spond to increasing demand for mobile conveying
solutions which, as well as being complementary to
existing core Terex Materials Processing segment
crushing, screening and shredding equipment, will
help enable Terex to enter the port and terminal in-
dustry.

Work is already underway at the Terex Campsie
facility, and is planned to be operational later this
year. The facility will initially create approximately
100 new jobs that include production operative roles,
management and support roles in HR, operations and
finance, as well as engineers.

A total of 1 100 tonnes of lithium-ion batteries will
initially be recycled at the new facility of Volkswagen
Components Group each year. This corresponds to
roughly 3 000 vehicle batteries. The innovative recy-
cling centre will be completed in 2020 to prepare for
the influx of end-of-life automotive batteries over the
next ten years. ‘At the end of the 2020s is when the first
large proportion of e-vehicles will have reached the
end of their working life,’ Volkswagen says. Capacity
at the Salzgitter plant will be expanded accordingly
in the next couple of years. Volkswagen also wants
to establish other recycling plants in the near future.

Used car batteries can go down one of two routes.
First, engineers examine whether the batteries qualify
for second-life use. If this is the case, they are able
to power flexible charging stations. ‘These are quick-
charging stations which can be operated autono-

Batteries not given a second life will
be recycled at the Salzgitter facility. In this
process, individual battery parts will first
be shredded, after which the material will
be dried and sieved. Doing so will allow
Volkswagen to extract the so-called ‘black
powder’, containing the valuable raw ma-
terials of nickel, manganese, cobalt and
lithium. ‘These materials then have to be
individually separated, after which they
are immediately available for the produc-
tion of new batteries,’ Volkswagen points
out.

In the long term, the Volkswagen Group wants to
recycle 97% of all its raw materials. Today, it recycles
53% and the pilot plant in Salzgitter should bring this
figure up to 72%. ‘There is still some way to go before
reaching the grand target,’ Volkswagen acknowledges.
‘Even if a lot of small steps are necessary, we are doing
everything we can to make e-mobility sustainable.’