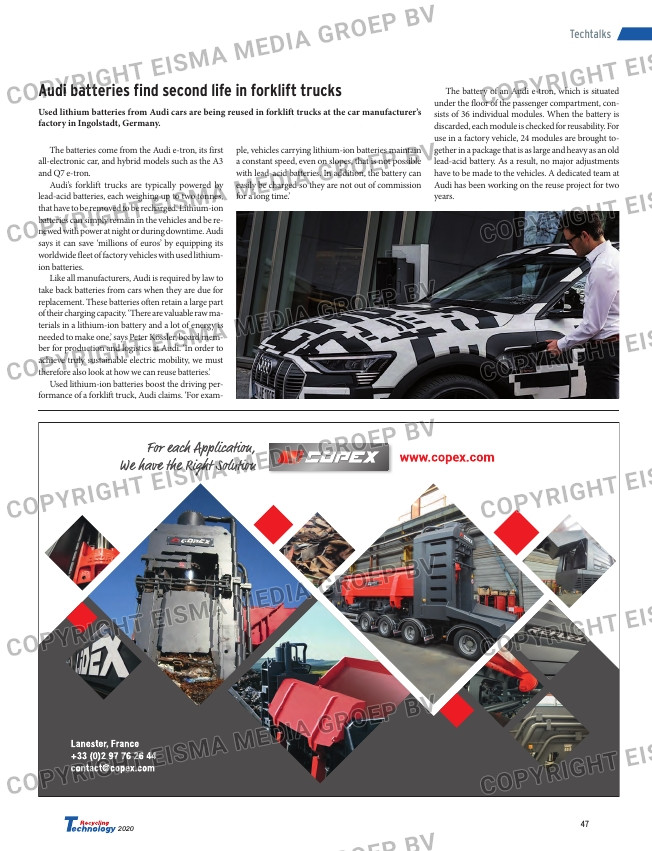 The batteries come from the Audi e-tron, its first
all-electronic car, and hybrid models such as the A3
and Q7 e-tron.

Audi’s forklift trucks are typically powered by
lead-acid batteries, each weighing up to two tonnes,
that have to be removed to be recharged. Lithium-ion
batteries can simply remain in the vehicles and be re-
newed with power at night or during downtime. Audi
says it can save ‘millions of euros’ by equipping its
worldwide fleet of factory vehicles with used lithium-
ion batteries.

Like all manufacturers, Audi is required by law to
take back batteries from cars when they are due for
replacement. These batteries often retain a large part
of their charging capacity. ‘There are valuable raw ma-
terials in a lithium-ion battery and a lot of energy is
needed to make one,’ says Peter Kössler, board mem-
ber for production and logistics at Audi. ‘In order to
achieve truly sustainable electric mobility, we must
therefore also look at how we can reuse batteries.’

Used lithium-ion batteries boost the driving per-
formance of a forklift truck, Audi claims. ‘For exam-

ple, vehicles carrying lithium-ion batteries maintain
a constant speed, even on slopes, that is not possible
with lead-acid batteries. In addition, the battery can
easily be charged so they are not out of commission
for a long time.’

The battery of an Audi e-tron, which is situated
under the floor of the passenger compartment, con-
sists of 36 individual modules. When the battery is
discarded, each module is checked for reusability. For
use in a factory vehicle, 24 modules are brought to-
gether in a package that is as large and heavy as an old
lead-acid battery. As a result, no major adjustments
have to be made to the vehicles. A dedicated team at
Audi has been working on the reuse project for two
years.