Subscribe
46 2020 Techtalks France drives asphalt innovation with recycled road The French company Vinci Construction has built what’s claimed to be the world’s first stretch of motorway made entirely from recycled materials. The A10 motorwa...
Read the entire page 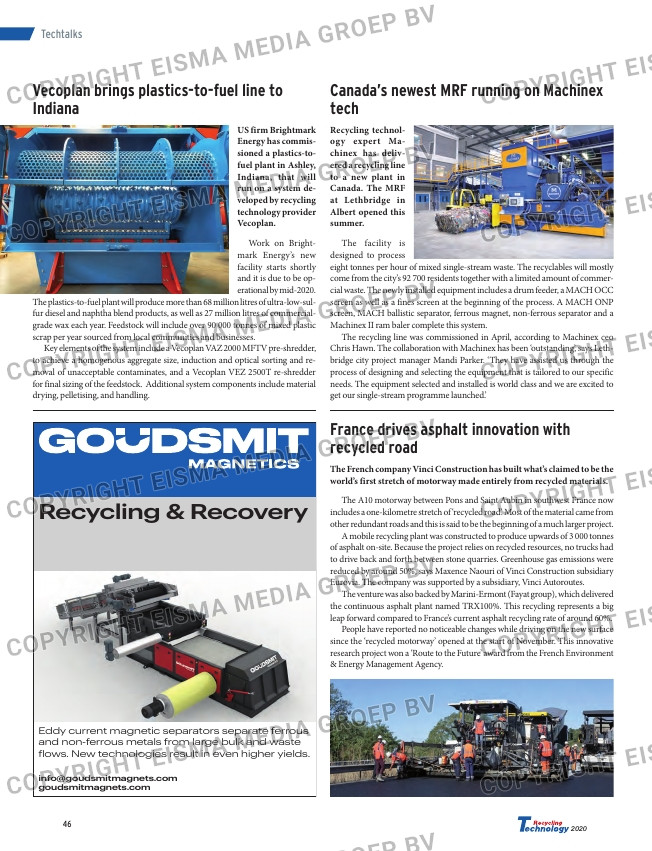 France drives asphalt innovation with
recycled road
The French company Vinci Construction has built what’s claimed to be the
world’s first stretch of motorway made entirely from recycled materials.

The A10 motorway between Pons and Saint Aubin in southwest France now
includes a one-kilometre stretch of ‘recycled road’. Most of the material came from
other redundant roads and this is said to be the beginning of a much larger project.

A mobile recycling plant was constructed to produce upwards of 3 000 tonnes
of asphalt on-site. Because the project relies on recycled resources, no trucks had
to drive back and forth between stone quarries. Greenhouse gas emissions were
reduced by around 50%, says Maxence Naouri of Vinci Construction subsidiary
Eurovia. The company was supported by a subsidiary, Vinci Autoroutes.

The venture was also backed by Marini-Ermont (Fayat group), which delivered
the continuous asphalt plant named TRX100%. This recycling represents a big
leap forward compared to France’s current asphalt recycling rate of around 60%.

People have reported no noticeable changes while driving on the new surface
since the ‘recycled motorway’ opened at the start of November. This innovative
research project won a ‘Route to the Future’ award from the French Environment
& Energy Management Agency.

The facility is
designed to process
eight tonnes per hour of mixed single-stream waste. The recyclables will mostly
come from the city’s 92 700 residents together with a limited amount of commer-
cial waste. The newly installed equipment includes a drum feeder, a MACH OCC
screen as well as a fines screen at the beginning of the process. A MACH ONP
screen, MACH ballistic separator, ferrous magnet, non-ferrous separator and a
Machinex II ram baler complete this system.

The recycling line was commissioned in April, according to Machinex ceo
Chris Hawn. The collaboration with Machinex has been ‘outstanding’, says Leth-
bridge city project manager Mandi Parker. ‘They have assisted us through the
process of designing and selecting the equipment that is tailored to our specific
needs. The equipment selected and installed is world class and we are excited to
get our single-stream programme launched.’

US firm Brightmark
Energy has commis-
sioned a plastics-to-
fuel plant in Ashley,
Indiana, that will
run on a system de-
veloped by recycling
technology provider
Vecoplan.

Work on Bright-
mark Energy’s new
facility starts shortly
and it is due to be op-
erational by mid-2020.

The plastics-to-fuel plant will produce more than 68 million litres of ultra-low-sul-
fur diesel and naphtha blend products, as well as 27 million litres of commercial-
grade wax each year. Feedstock will include over 90 000 tonnes of mixed plastic
scrap per year sourced from local communities and businesses.

Key elements of the system include a Vecoplan VAZ 2000 MFTV pre-shredder,
to achieve a homogenous aggregate size, induction and optical sorting and re-
moval of unacceptable contaminates, and a Vecoplan VEZ 2500T re-shredder
for final sizing of the feedstock. Additional system components include material
drying, pelletising, and handling.