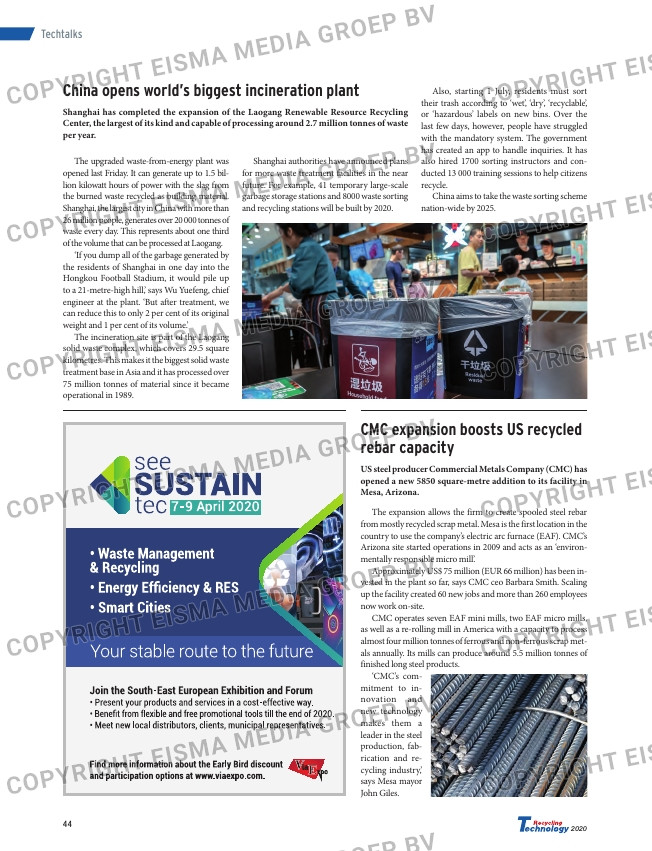 The expansion allows the firm to create spooled steel rebar
from mostly recycled scrap metal. Mesa is the first location in the
country to use the company’s electric arc furnace (EAF). CMC’s
Arizona site started operations in 2009 and acts as an ‘environ-
mentally responsible micro mill’.

Approximately US$ 75 million (EUR 66 million) has been in-
vested in the plant so far, says CMC ceo Barbara Smith. Scaling
up the facility created 60 new jobs and more than 260 employees
now work on-site.

‘CMC’s com-
mitment to in-
novation and
new technology
makes them a
leader in the steel
production, fab-
rication and re-
cycling industry,’
says Mesa mayor
John Giles.

China opens world’s biggest incineration plant
Shanghai has completed the expansion of the Laogang Renewable Resource Recycling
Center, the largest of its kind and capable of processing around 2.7 million tonnes of waste
per year.

The upgraded waste-from-energy plant was
opened last Friday. It can generate up to 1.5 bil-
lion kilowatt hours of power with the slag from
the burned waste recycled as building material.
Shanghai, the largest city in China with more than
26 million people, generates over 20 000 tonnes of
waste every day. This represents about one third
of the volume that can be processed at Laogang.

‘If you dump all of the garbage generated by
the residents of Shanghai in one day into the
Hongkou Football Stadium, it would pile up
to a 21-metre-high hill,’ says Wu Yuefeng, chief
engineer at the plant. ‘But after treatment, we
can reduce this to only 2 per cent of its original
weight and 1 per cent of its volume.’

The incineration site is part of the Laogang
solid waste complex, which covers 29.5 square
kilometres. This makes it the biggest solid waste
treatment base in Asia and it has processed over
75 million tonnes of material since it became
operational in 1989.

Shanghai authorities have announced plans
for more waste treatment facilities in the near
future. For example, 41 temporary large-scale
garbage storage stations and 8000 waste sorting
and recycling stations will be built by 2020.

Also, starting 1 July, residents must sort
their trash according to ‘wet’, ‘dry’, ‘recyclable’,
or ‘hazardous’ labels on new bins. Over the
last few days, however, people have struggled
with the mandatory system. The government
has created an app to handle inquiries. It has
also hired 1700 sorting instructors and con-
ducted 13 000 training sessions to help citizens
recycle.

China aims to take the waste sorting scheme
nation-wide by 2025.