Subscribe
34 2020 Technolab A ustralia produces 200 000 tonnes of e- waste every year, according to research- ers at the Australia National University (ANU). But, as they point out, barely 5% of this quickly growing waste stream is recycled. At...
Read the entire page 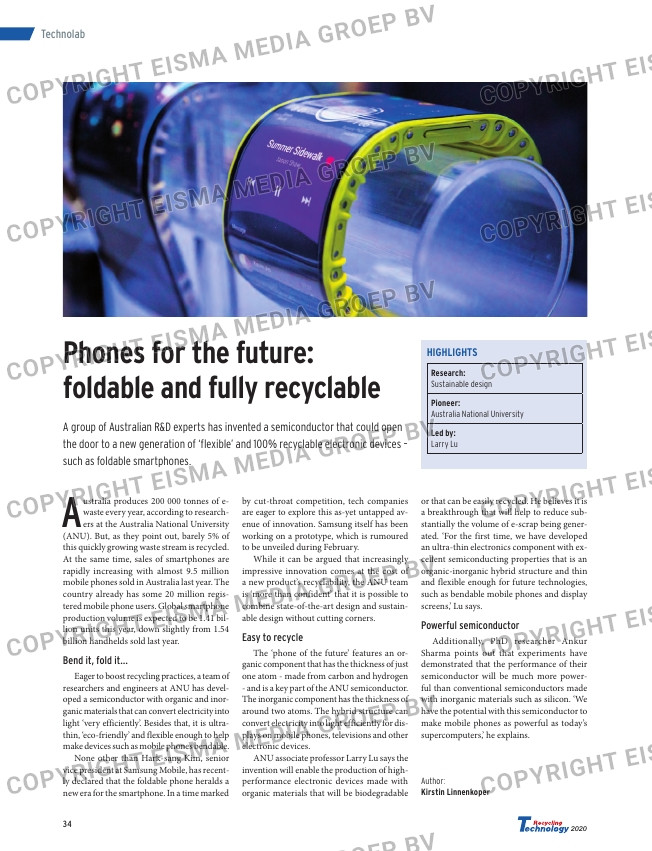 A
ustralia produces 200 000 tonnes of e-
waste every year, according to research-
ers at the Australia National University

(ANU). But, as they point out, barely 5% of
this quickly growing waste stream is recycled.
At the same time, sales of smartphones are
rapidly increasing with almost 9.5 million
mobile phones sold in Australia last year. The
country already has some 20 million regis-
tered mobile phone users. Global smartphone
production volume is expected to be 1.41 bil-
lion units this year, down slightly from 1.54
billion handhelds sold last year.

Bend it, fold it…
Eager to boost recycling practices, a team of

researchers and engineers at ANU has devel-
oped a semiconductor with organic and inor-
ganic materials that can convert electricity into
light ‘very efficiently’. Besides that, it is ultra-
thin, ‘eco-friendly’ and flexible enough to help
make devices such as mobile phones bendable.

None other than Hark-sang Kim, senior
vice president at Samsung Mobile, has recent-
ly declared that the foldable phone heralds a
new era for the smartphone. In a time marked

by cut-throat competition, tech companies
are eager to explore this as-yet untapped av-
enue of innovation. Samsung itself has been
working on a prototype, which is rumoured
to be unveiled during February.

While it can be argued that increasingly
impressive innovation comes at the cost of
a new product’s recyclability, the ANU team
is ‘more than confident’ that it is possible to
combine state-of-the-art design and sustain-
able design without cutting corners.

Easy to recycle
The ‘phone of the future’ features an or-

or that can be easily recycled. He believes it is
a breakthrough that will help to reduce sub-
stantially the volume of e-scrap being gener-
ated. ‘For the first time, we have developed
an ultra-thin electronics component with ex-
cellent semiconducting properties that is an
organic-inorganic hybrid structure and thin
and flexible enough for future technologies,
such as bendable mobile phones and display
screens,’ Lu says.

Sharma points out that experiments have
demonstrated that the performance of their
semiconductor will be much more power-
ful than conventional semiconductors made
with inorganic materials such as silicon. ‘We
have the potential with this semiconductor to
make mobile phones as powerful as today’s
supercomputers,’ he explains.

Phones for the future:
foldable and fully recyclable
A group of Australian R&D experts has invented a semiconductor that could open
the door to a new generation of ‘flexible’ and 100% recyclable electronic devices –
such as foldable smartphones.