Subscribe
33 2020 Research ists and programmers on call. Our role is that of doctor, and our patients are batteries that have lost their functionality. It’s up to us to diagnose how badly injured they are and to fix them up again.’ This is...
Read the entire page 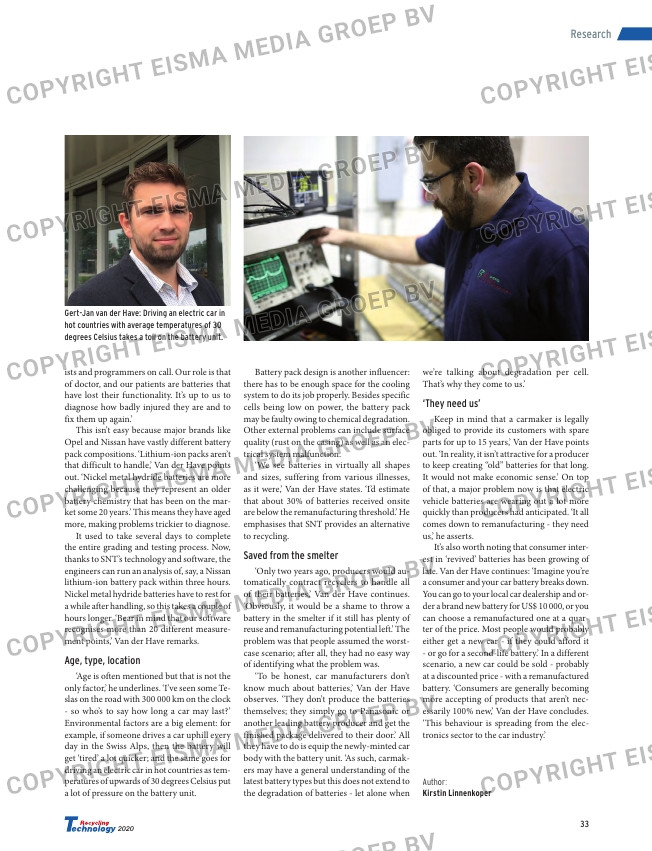 ists and programmers on call. Our role is that
of doctor, and our patients are batteries that
have lost their functionality. It’s up to us to
diagnose how badly injured they are and to
fix them up again.’

This isn’t easy because major brands like
Opel and Nissan have vastly different battery
pack compositions. ‘Lithium-ion packs aren’t
that difficult to handle,’ Van der Have points
out. ‘Nickel metal hydride batteries are more
challenging because they represent an older
battery chemistry that has been on the mar-
ket some 20 years.’ This means they have aged
more, making problems trickier to diagnose.

It used to take several days to complete
the entire grading and testing process. Now,
thanks to SNT’s technology and software, the
engineers can run an analysis of, say, a Nissan
lithium-ion battery pack within three hours.
Nickel metal hydride batteries have to rest for
a while after handling, so this takes a couple of
hours longer. ‘Bear in mind that our software
recognises more than 20 different measure-
ment points,’ Van der Have remarks.

Age, type, location
‘Age is often mentioned but that is not the

only factor,’ he underlines. ‘I’ve seen some Te-
slas on the road with 300 000 km on the clock
– so who’s to say how long a car may last?’
Environmental factors are a big element: for
example, if someone drives a car uphill every
day in the Swiss Alps, then the battery will
get ‘tired’ a lot quicker; and the same goes for
driving an electric car in hot countries as tem-
peratures of upwards of 30 degrees Celsius put
a lot of pressure on the battery unit.

Battery pack design is another influencer:
there has to be enough space for the cooling
system to do its job properly. Besides specific
cells being low on power, the battery pack
may be faulty owing to chemical degradation.
Other external problems can include surface
quality (rust on the casing) as well as an elec-
trical system malfunction.

‘We see batteries in virtually all shapes
and sizes, suffering from various illnesses,
as it were,’ Van der Have states. ‘I’d estimate
that about 30% of batteries received onsite
are below the remanufacturing threshold.’ He
emphasises that SNT provides an alternative
to recycling.

Saved from the smelter
‘Only two years ago, producers would au-

tomatically contract recyclers to handle all
of their batteries,’ Van der Have continues.
‘Obviously, it would be a shame to throw a
battery in the smelter if it still has plenty of
reuse and remanufacturing potential left.’ The
problem was that people assumed the worst-
case scenario; after all, they had no easy way
of identifying what the problem was.

‘To be honest, car manufacturers don’t
know much about batteries,’ Van der Have
observes. ‘They don’t produce the batteries
themselves; they simply go to Panasonic or
another leading battery producer and get the
finished package delivered to their door.’ All
they have to do is equip the newly-minted car
body with the battery unit. ‘As such, carmak-
ers may have a general understanding of the
latest battery types but this does not extend to
the degradation of batteries – let alone when

we’re talking about degradation per cell.
That’s why they come to us.’

‘They need us’
Keep in mind that a carmaker is legally

obliged to provide its customers with spare
parts for up to 15 years,’ Van der Have points
out. ‘In reality, it isn’t attractive for a producer
to keep creating “old” batteries for that long.
It would not make economic sense.’ On top
of that, a major problem now is that electric
vehicle batteries are wearing out a lot more
quickly than producers had anticipated. ‘It all
comes down to remanufacturing – they need
us,’ he asserts.

It’s also worth noting that consumer inter-
est in ‘revived’ batteries has been growing of
late. Van der Have continues: ‘Imagine you’re
a consumer and your car battery breaks down.
You can go to your local car dealership and or-
der a brand new battery for US$ 10 000, or you
can choose a remanufactured one at a quar-
ter of the price. Most people would probably
either get a new car – if they could afford it
– or go for a second-life battery.’ In a different
scenario, a new car could be sold – probably
at a discounted price – with a remanufactured
battery. ‘Consumers are generally becoming
more accepting of products that aren’t nec-
essarily 100% new,’ Van der Have concludes.
‘This behaviour is spreading from the elec-
tronics sector to the car industry.’

Gert-Jan van der Have: Driving an electric car in
hot countries with average temperatures of 30
degrees Celsius takes a toll on the battery unit.