Subscribe
28 2020 Research Robotics drives recycling of US munitions The US Army has successfully decommissioned more than 700 000 explosive devices manufactured for rocket launchers. How? With the help of a hi-tech robotics system built and prog...
Read the entire page 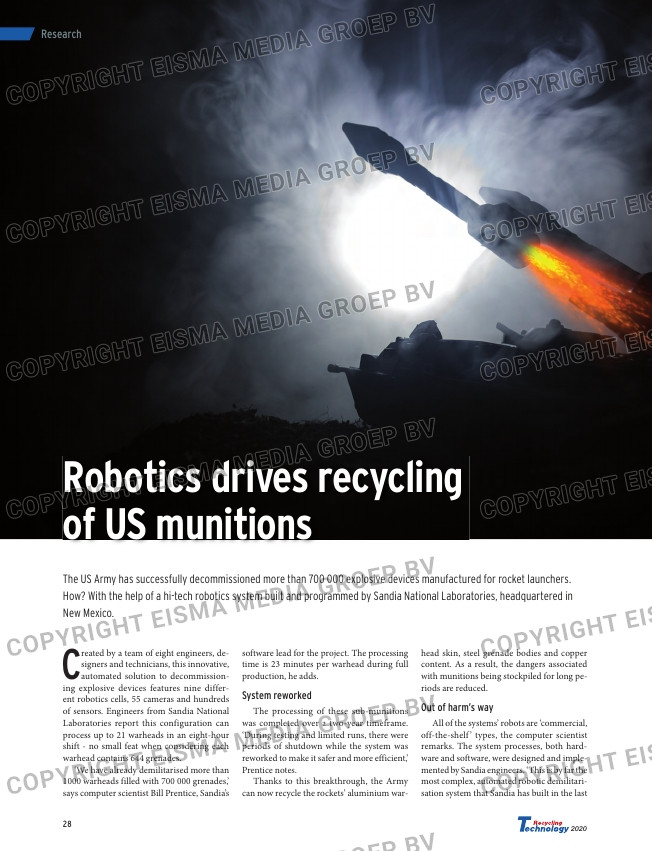 Robotics drives recycling
of US munitions
The US Army has successfully decommissioned more than 700 000 explosive devices manufactured for rocket launchers.
How? With the help of a hi-tech robotics system built and programmed by Sandia National Laboratories, headquartered in
New Mexico.

C
reated by a team of eight engineers, de-
signers and technicians, this innovative,
automated solution to decommission-

ing explosive devices features nine differ-
ent robotics cells, 55 cameras and hundreds
of sensors. Engineers from Sandia National
Laboratories report this configuration can
process up to 21 warheads in an eight-hour
shift – no small feat when considering each
warhead contains 644 grenades.

software lead for the project. The processing
time is 23 minutes per warhead during full
production, he adds.

System reworked
The processing of these sub-munitions

was completed over a two-year timeframe.
‘During testing and limited runs, there were
periods of shutdown while the system was
reworked to make it safer and more efficient,’
Prentice notes.

Thanks to this breakthrough, the Army
can now recycle the rockets’ aluminium war-

head skin, steel grenade bodies and copper
content. As a result, the dangers associated
with munitions being stockpiled for long pe-
riods are reduced.

Out of harm’s way
All of the systems’ robots are ‘commercial,

off-the-shelf ’ types, the computer scientist
remarks. The system processes, both hard-
ware and software, were designed and imple-
mented by Sandia engineers. ‘This is by far the
most complex, automated robotic demilitari-
sation system that Sandia has built in the last