Subscribe
12 2020 Research While being phased out by more efficient and safer LED lamps, fluorescent lamps are still in use - particularly in developing countries - owing to their low price, simple construc- tion and availability. At the beginni...
Read the entire page 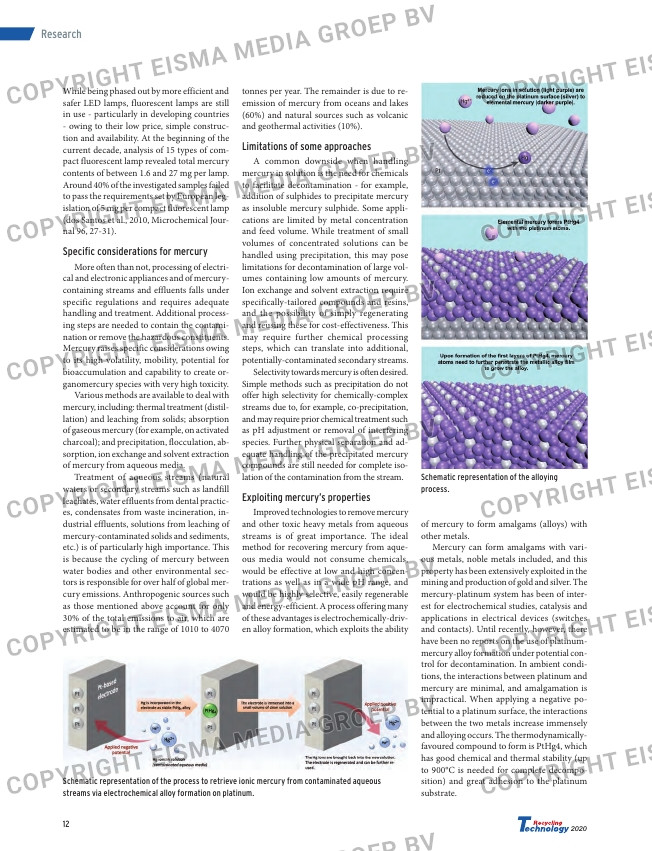 While being phased out by more efficient and
safer LED lamps, fluorescent lamps are still
in use – particularly in developing countries
– owing to their low price, simple construc-
tion and availability. At the beginning of the
current decade, analysis of 15 types of com-
pact fluorescent lamp revealed total mercury
contents of between 1.6 and 27 mg per lamp.
Around 40% of the investigated samples failed
to pass the requirements set by European leg-
islation of 5 mg per compact fluorescent lamp
(dos Santos et al., 2010, Microchemical Jour-
nal 96, 27-31).

Specific considerations for mercury
More often than not, processing of electri-

cal and electronic appliances and of mercury-
containing streams and effluents falls under
specific regulations and requires adequate
handling and treatment. Additional process-
ing steps are needed to contain the contami-
nation or remove the hazardous constituents.
Mercury raises specific considerations owing
to its high volatility, mobility, potential for
bioaccumulation and capability to create or-
ganomercury species with very high toxicity.

Various methods are available to deal with
mercury, including: thermal treatment (distil-
lation) and leaching from solids; absorption
of gaseous mercury (for example, on activated
charcoal); and precipitation, flocculation, ab-
sorption, ion exchange and solvent extraction
of mercury from aqueous media.

Treatment of aqueous streams (natural
waters or secondary streams such as landfill
leachates, water effluents from dental practic-
es, condensates from waste incineration, in-
dustrial effluents, solutions from leaching of
mercury-contaminated solids and sediments,
etc.) is of particularly high importance. This
is because the cycling of mercury between
water bodies and other environmental sec-
tors is responsible for over half of global mer-
cury emissions. Anthropogenic sources such
as those mentioned above account for only
30% of the total emissions to air, which are
estimated to be in the range of 1010 to 4070

tonnes per year. The remainder is due to re-
emission of mercury from oceans and lakes
(60%) and natural sources such as volcanic
and geothermal activities (10%).

Limitations of some approaches
A common downside when handling

mercury in solution is the need for chemicals
to facilitate decontamination – for example,
addition of sulphides to precipitate mercury
as insoluble mercury sulphide. Some appli-
cations are limited by metal concentration
and feed volume. While treatment of small
volumes of concentrated solutions can be
handled using precipitation, this may pose
limitations for decontamination of large vol-
umes containing low amounts of mercury.
Ion exchange and solvent extraction require
specifically-tailored compounds and resins,
and the possibility of simply regenerating
and reusing these for cost-effectiveness. This
may require further chemical processing
steps, which can translate into additional,
potentially-contaminated secondary streams.

Selectivity towards mercury is often desired.
Simple methods such as precipitation do not
offer high selectivity for chemically-complex
streams due to, for example, co-precipitation,
and may require prior chemical treatment such
as pH adjustment or removal of interfering
species. Further physical separation and ad-
equate handling of the precipitated mercury
compounds are still needed for complete iso-
lation of the contamination from the stream.

and other toxic heavy metals from aqueous
streams is of great importance. The ideal
method for recovering mercury from aque-
ous media would not consume chemicals,
would be effective at low and high concen-
trations as well as in a wide pH range, and
would be highly selective, easily regenerable
and energy-efficient. A process offering many
of these advantages is electrochemically-driv-
en alloy formation, which exploits the ability

of mercury to form amalgams (alloys) with
other metals.

Mercury can form amalgams with vari-
ous metals, noble metals included, and this
property has been extensively exploited in the
mining and production of gold and silver. The
mercury-platinum system has been of inter-
est for electrochemical studies, catalysis and
applications in electrical devices (switches
and contacts). Until recently, however, there
have been no reports on the use of platinum-
mercury alloy formation under potential con-
trol for decontamination. In ambient condi-
tions, the interactions between platinum and
mercury are minimal, and amalgamation is
impractical. When applying a negative po-
tential to a platinum surface, the interactions
between the two metals increase immensely
and alloying occurs. The thermodynamically-
favoured compound to form is PtHg4, which
has good chemical and thermal stability (up
to 900°C is needed for complete decompo-
sition) and great adhesion to the platinum
substrate.

Schematic representation of the process to retrieve ionic mercury from contaminated aqueous
streams via electrochemical alloy formation on platinum.

Schematic representation of the alloying
process.