Subscribe
65recyclinginternational.com | November/December | 2020 ferrous compared to January-June 2019). EU-28 internal exports (according to intra-trade figures) totalled 12.986 mil- lion tonnes in the first half of 2020 (-14.4% when compa...
Read the entire page 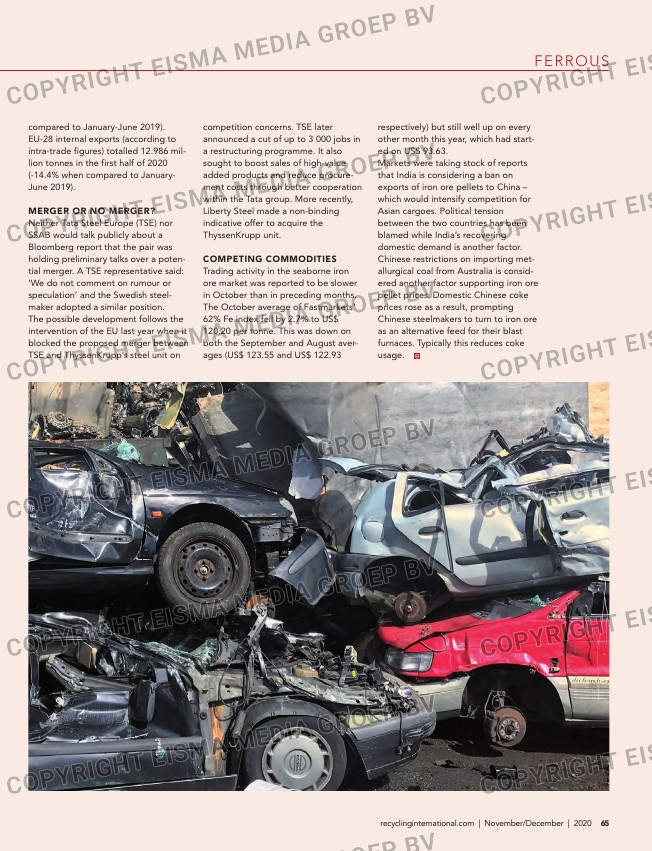 MERGER OR NO MERGER?
Neither Tata Steel Europe (TSE) nor
SSAB would talk publicly about a
Bloomberg report that the pair was
holding preliminary talks over a poten-
tial merger. A TSE representative said:
‘We do not comment on rumour or
speculation’ and the Swedish steel-
maker adopted a similar position.
The possible development follows the
intervention of the EU last year when it
blocked the proposed merger between
TSE and ThyssenKrupp’s steel unit on

competition concerns. TSE later
announced a cut of up to 3 000 jobs in
a restructuring programme. It also
sought to boost sales of high-value
added products and reduce procure-
ment costs through better cooperation
within the Tata group. More recently,
Liberty Steel made a non-binding
indicative offer to acquire the
ThyssenKrupp unit.

COMPETING COMMODITIES
Trading activity in the seaborne iron
ore market was reported to be slower
in October than in preceding months.
The October average of Fastmarkets’
62% Fe index fell by 2.7% to US$
120.20 per tonne. This was down on
both the September and August aver-
ages (US$ 123.55 and US$ 122.93

respectively) but still well up on every
other month this year, which had start-
ed on US$ 93.63.
Markets were taking stock of reports
that India is considering a ban on
exports of iron ore pellets to China –
which would intensify competition for
Asian cargoes. Political tension
between the two countries has been
blamed while India’s recovering
domestic demand is another factor.
Chinese restrictions on importing met-
allurgical coal from Australia is consid-
ered another factor supporting iron ore
pellet prices. Domestic Chinese coke
prices rose as a result, prompting
Chinese steelmakers to turn to iron ore
as an alternative feed for their blast
furnaces. Typically this reduces coke
usage.