Subscribe
ferrous 63recyclinginternational.com | November/December | 2020 tial destabilisation of international steel markets. ‘The scale and persistence of excess capacity in the steel industry calls for more ambition in the transparency ...
Read the entire page 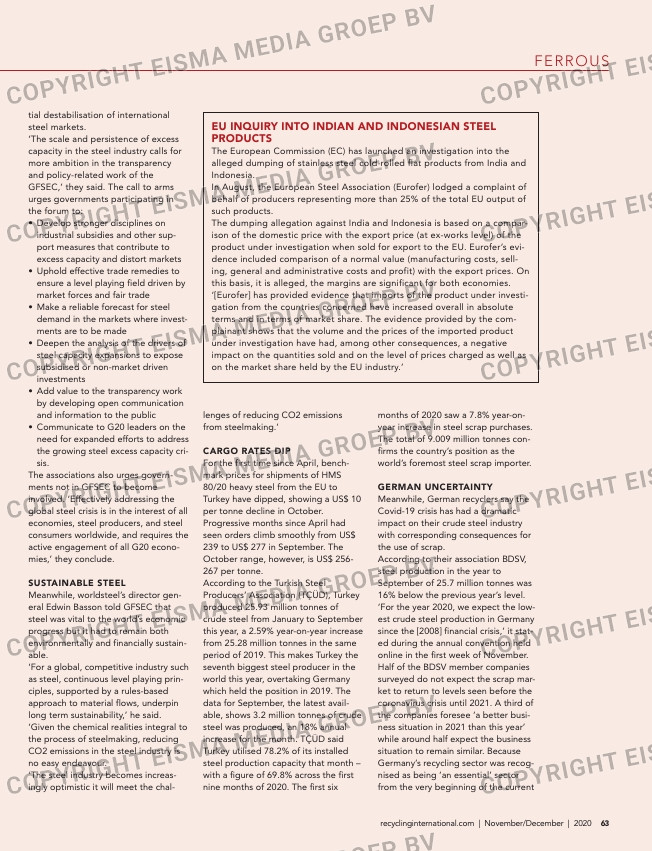 tial destabilisation of international
steel markets.
‘The scale and persistence of excess
capacity in the steel industry calls for
more ambition in the transparency
and policy-related work of the
GFSEC,’ they said. The call to arms
urges governments participating in
the forum to:
• Develop stronger disciplines on

• Communicate to G20 leaders on the
need for expanded efforts to address
the growing steel excess capacity cri-
sis.

The associations also urges govern-
ments not in GFSEC to become
involved. ‘Effectively addressing the
global steel crisis is in the interest of all
economies, steel producers, and steel
consumers worldwide, and requires the
active engagement of all G20 econo-
mies,’ they conclude.

SUSTAINABLE STEEL
Meanwhile, worldsteel’s director gen-
eral Edwin Basson told GFSEC that
steel was vital to the world’s economic
progress but it had to remain both
environmentally and financially sustain-
able.
‘For a global, competitive industry such
as steel, continuous level playing prin-
ciples, supported by a rules-based
approach to material flows, underpin
long term sustainability,’ he said.
‘Given the chemical realities integral to
the process of steelmaking, reducing
CO2 emissions in the steel industry is
no easy endeavour.
‘The steel industry becomes increas-
ingly optimistic it will meet the chal-

EU INQUIRY INTO INDIAN AND INDONESIAN STEEL
PRODUCTS
The European Commission (EC) has launched an investigation into the
alleged dumping of stainless steel cold-rolled flat products from India and
Indonesia.
In August, the European Steel Association (Eurofer) lodged a complaint of
behalf of producers representing more than 25% of the total EU output of
such products.
The dumping allegation against India and Indonesia is based on a compar-
ison of the domestic price with the export price (at ex-works level) of the
product under investigation when sold for export to the EU. Eurofer’s evi-
dence included comparison of a normal value (manufacturing costs, sell-
ing, general and administrative costs and profit) with the export prices. On
this basis, it is alleged, the margins are significant for both economies.
‘[Eurofer] has provided evidence that imports of the product under investi-
gation from the countries concerned have increased overall in absolute
terms and in terms of market share. The evidence provided by the com-
plainant shows that the volume and the prices of the imported product
under investigation have had, among other consequences, a negative
impact on the quantities sold and on the level of prices charged as well as
on the market share held by the EU industry.’

CARGO RATES DIP
For the first time since April, bench-
mark prices for shipments of HMS
80/20 heavy steel from the EU to
Turkey have dipped, showing a US$ 10
per tonne decline in October.
Progressive months since April had
seen orders climb smoothly from US$
239 to US$ 277 in September. The
October range, however, is US$ 256-
267 per tonne.
According to the Turkish Steel
Producers’ Association (TÇÜD), Turkey
produced 25.93 million tonnes of
crude steel from January to September
this year, a 2.59% year-on-year increase
from 25.28 million tonnes in the same
period of 2019. This makes Turkey the
seventh biggest steel producer in the
world this year, overtaking Germany
which held the position in 2019. The
data for September, the latest avail-
able, shows 3.2 million tonnes of crude
steel was produced, an 18% annual
increase for the month. TÇÜD said
Turkey utilised 78.2% of its installed
steel production capacity that month –
with a figure of 69.8% across the first
nine months of 2020. The first six

GERMAN UNCERTAINTY
Meanwhile, German recyclers say the
Covid-19 crisis has had a dramatic
impact on their crude steel industry
with corresponding consequences for
the use of scrap.
According to their association BDSV,
steel production in the year to
September of 25.7 million tonnes was
16% below the previous year’s level.
‘For the year 2020, we expect the low-
est crude steel production in Germany
since the [2008] financial crisis,’ it stat-
ed during the annual convention held
online in the first week of November.
Half of the BDSV member companies
surveyed do not expect the scrap mar-
ket to return to levels seen before the
coronavirus crisis until 2021. A third of
the companies foresee ‘a better busi-
ness situation in 2021 than this year’
while around half expect the business
situation to remain similar. Because
Germany’s recycling sector was recog-
nised as being ‘an essential’ sector
from the very beginning of the current