Subscribe
Steinert’s AI-driven solu tions deliver greater sorting reliability Together with better performance, simplified maintenance is the key multiplier for the economic viability of a sorting facility. Through its new software and...
Read the entire page 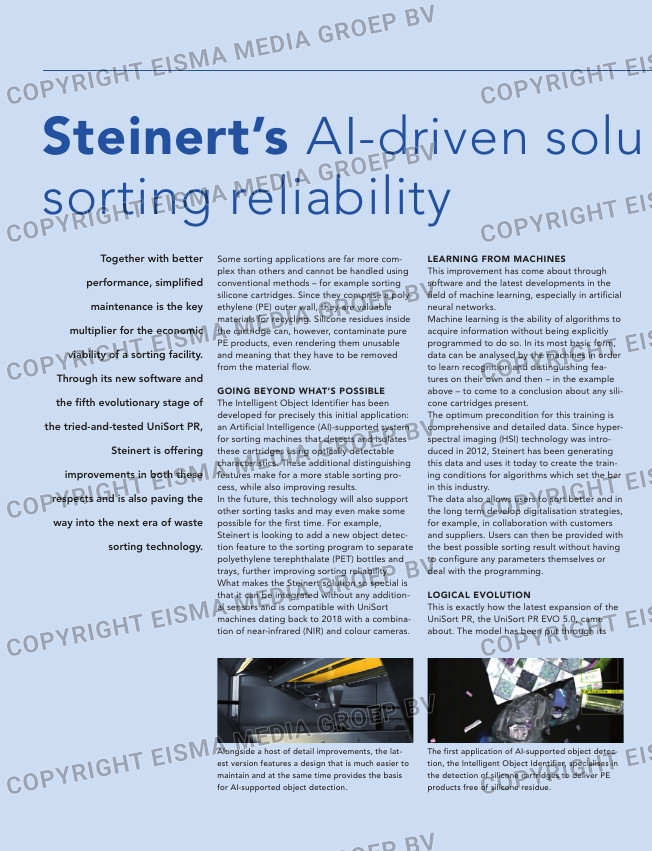 maintenance is the key

multiplier for the economic

viability of a sorting facility.

Through its new software and

the fifth evolutionary stage of

improvements in both these

respects and is also paving the

way into the next era of waste

Some sorting applications are far more com-
plex than others and cannot be handled using
conventional methods – for example sorting
silicone cartridges. Since they comprise a poly-
ethylene (PE) outer wall, they are valuable
materials for recycling. Silicone residues inside
the cartridge can, however, contaminate pure
PE products, even rendering them unusable
and meaning that they have to be removed
from the material flow.

GoinG beyond what’S poSSible
The Intelligent Object Identifier has been
developed for precisely this initial application:
an Artificial Intelligence (AI)-supported system
for sorting machines that detects and isolates
these cartridges using optically detectable
characteristics. These additional distinguishing
features make for a more stable sorting pro-
cess, while also improving results.
In the future, this technology will also support
other sorting tasks and may even make some
possible for the first time. For example,
Steinert is looking to add a new object detec-
tion feature to the sorting program to separate
polyethylene terephthalate (PET) bottles and
trays, further improving sorting reliability.
What makes the Steinert solution so special is
that it can be integrated without any addition-
al sensors and is compatible with UniSort
machines dating back to 2018 with a combina-
tion of near-infrared (NIR) and colour cameras.

learninG from machineS
This improvement has come about through
software and the latest developments in the
field of machine learning, especially in artificial
neural networks.
Machine learning is the ability of algorithms to
acquire information without being explicitly
programmed to do so. In its most basic form,
data can be analysed by the machines in order
to learn recognition and distinguishing fea-
tures on their own and then – in the example
above – to come to a conclusion about any sili-
cone cartridges present.
The optimum precondition for this training is
comprehensive and detailed data. Since hyper-
spectral imaging (HSI) technology was intro-
duced in 2012, Steinert has been generating
this data and uses it today to create the train-
ing conditions for algorithms which set the bar
in this industry.
The data also allows users to sort better and in
the long term develop digitalisation strategies,
for example, in collaboration with customers
and suppliers. Users can then be provided with
the best possible sorting result without having
to configure any parameters themselves or
deal with the programming.

loGical evolution
This is exactly how the latest expansion of the
UniSort PR, the UniSort PR EVO 5.0, came
about. The model has been put through its

paces in practical trials since the start of 2019
and is the next logical step in the evolution of
sorting machines.
It is also a showpiece of modern technology
and robust engineering work. Alongside a host
of individual improvements, the latest iteration
features a design that is much easier to main-
tain and delivers advanced sorting results.
Dynamic calibration monitors the spectrum of
the belt lighting, which is changing all the time
in response to external factors, and does so

Alongside a host of detail improvements, the lat-
est version features a design that is much easier to
maintain and at the same time provides the basis
for AI-supported object detection.