Subscribe
38 China’s strict import regulations in tandem with the aftermath of Covid-19 lock- downs are fuelling uncertainty in the plastics market, according to Dr Steve Wong, ceo of Fukutomi Recycling in Hong Kong. The market has proved to be...
Read the entire page 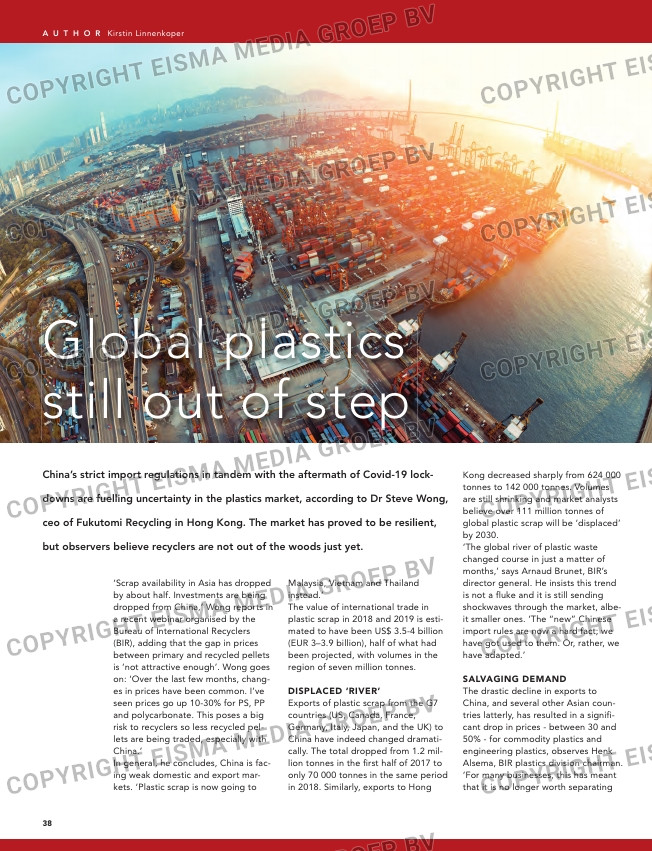 downs are fuelling uncertainty in the plastics market, according to Dr Steve Wong,

ceo of Fukutomi Recycling in Hong Kong. The market has proved to be resilient,

but observers believe recyclers are not out of the woods just yet.

materials and a great deal of plastic is
now going to local incinerators.’
And yet, he predicts, the global plas-
tic recycling market will experience a
6% growth rate per year in the medi-
um term.
Looking to the future, demand for
plastics will remain strong in the
Middle East and Africa, where totals
are projected to triple by the start of
the next century, while prospects in
developing Asian countries are also
said to be promising. Alsema believes
demand will grow slightly in China and
developed Asian countries while
remaining stable in the rest of the
world by 2100.
‘That’s why it’s so important to
enforce mandatory recycled content
targets while extending producer
responsibility schemes,’ Brunet insists.
The industry has also to keep taking
stock of the situation ‘so we can
engage in new actions’.

More coMplications
‘Until recently, most plastic waste has
been traded unfettered as non-haz-
ardous scrap outside the scope of the
Basel Convention,’ observes Patricia
Whiting of Sims Recycling Solutions in
the Boston area. ‘This will all change
in January 2021.’
In the New Year, amendments to the
convention will impose new burdens
on the trade in plastics which are
expected to limit plastic waste avail-
able for recycling facilities as well as
the availability of recycled plastics.
‘The amendments were passed in
record time,’ says Whiting, who is part
of a working group hoping to optimise ‘Scrap availability in Asia has dropped

by about half. Investments are being
dropped from China,’ Wong reports in
a recent webinar organised by the
Bureau of International Recyclers
(BIR), adding that the gap in prices
between primary and recycled pellets
is ‘not attractive enough’. Wong goes
on: ‘Over the last few months, chang-
es in prices have been common. I’ve
seen prices go up 10-30% for PS, PP
and polycarbonate. This poses a big
risk to recyclers so less recycled pel-
lets are being traded, especially with
China.’
In general, he concludes, China is fac-
ing weak domestic and export mar-
kets. ‘Plastic scrap is now going to

Malaysia, Vietnam and Thailand
instead.’
The value of international trade in
plastic scrap in 2018 and 2019 is esti-
mated to have been US$ 3.5-4 billion
(EUR 3–3.9 billion), half of what had
been projected, with volumes in the
region of seven million tonnes.

displaced ‘riVer’
Exports of plastic scrap from the G7
countries (US, Canada, France,
Germany, Italy, Japan, and the UK) to
China have indeed changed dramati-
cally. The total dropped from 1.2 mil-
lion tonnes in the first half of 2017 to
only 70 000 tonnes in the same period
in 2018. Similarly, exports to Hong

Kong decreased sharply from 624 000
tonnes to 142 000 tonnes. Volumes
are still shrinking and market analysts
believe over 111 million tonnes of
global plastic scrap will be ‘displaced’
by 2030.
‘The global river of plastic waste
changed course in just a matter of
months,’ says Arnaud Brunet, BIR’s
director general. He insists this trend
is not a fluke and it is still sending
shockwaves through the market, albe-
it smaller ones. ‘The “new” Chinese
import rules are now a hard fact; we
have got used to them. Or, rather, we
have adapted.’

salVaging deMand
The drastic decline in exports to
China, and several other Asian coun-
tries latterly, has resulted in a signifi-
cant drop in prices – between 30 and
50% – for commodity plastics and
engineering plastics, observes Henk
Alsema, BIR plastics division chairman.
‘For many businesses, this has meant
that it is no longer worth separating

Global plastics
still out of step