Subscribe
34 More than eight billion tonnes of plastic have been produced worldwide since the material first hit the mass markets in the 1950s, with three-quarters ending up as waste. In 2019, production of plastics totalled over 260 million ton...
Read the entire page 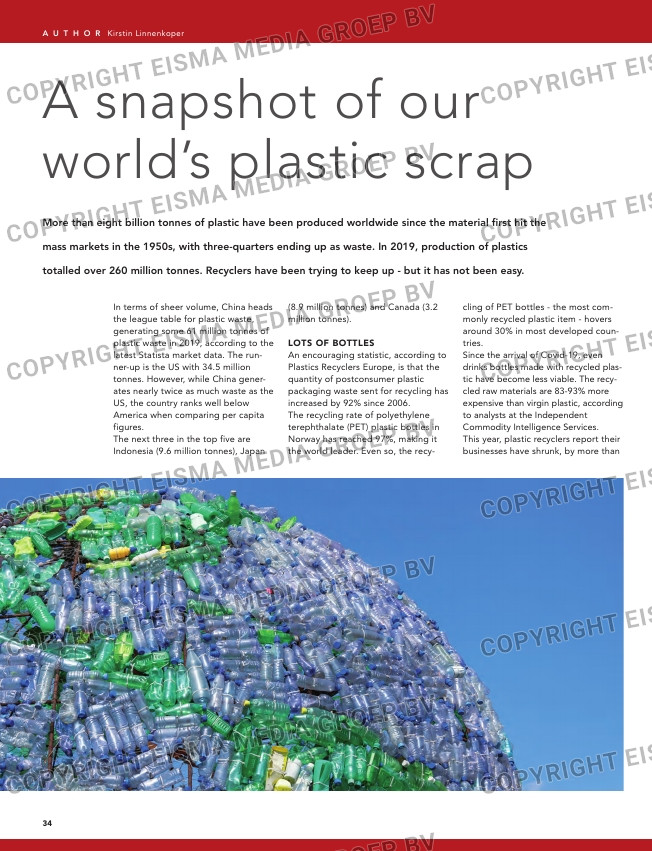 mass markets in the 1950s, with three-quarters ending up as waste. In 2019, production of plastics

totalled over 260 million tonnes. Recyclers have been trying to keep up – but it has not been easy.

20% in Europe, 50% in parts of Asia
and as much as 60% for some firms in
the United States.
According to a new ‘pandemic recov-
ery report’ by market research unit
Technavio, the global bottle recycling
market will grow at a compound annu-
al rate of 7% until 2024. This means an
‘incremental growth’ value of US$ 3
billion (EUR 2.5 billion).

Brighter future?
‘If we extrapolate historical trends, by
2050 incineration rates will increase to
50%; recycling to 44%; and landfilling
waste will fall to 6%,’ reports scientific
publication Our World in Data. Its ana-
lysts acknowledge that trend lines
hardly ever evolve in a gradual, per-
fectly predictable pattern so the fig-
ures may be way off.
One thing is for certin, however, and
that is lots of plastic scrap mean lots
of work for recyclers. Indeed, Statista
projects the worldwide market value
of the global plastics recycling sector
will grow US$ 20 billion over the
next four years. This would put the
market value at almost US$ 65 billion
in 2024.
A positive development is that the
R&D sector has been exploring many
innovative ideas. The US Department
of Energy recently announced more
than US$ 27 million in funding for 12
projects that will support the develop-
ment of advanced plastics recycling
technologies and design for recycling.
The UK’s Research and Innovation
Industrial Strategy Challenge Fund is
investing £20 million (EUR 22 million)
in four recycling plants across England
and Scotland. Part of the money will
go towards a collaboration between
Veolia, Unilever, Charpak and HSSMI
to develop the UK’s first dual PET bot-
tle and tray recycling facility.

‘reckoning moment’ for oil
Meanwhile, plastics manufacturers
continue to ramp up production. For
example, the energy think tank
Carbon Tracker recently calculated the
petrochemical industry is planning to
spend a further US$ 400 billion on 80
million tonnes of new capacity even
though it already has ‘huge overca-
pacity’. Meanwhile, growing trends
towards zero waste lifestyles and the
rising environmental awareness of

A snapshot of our
world’s plastic scrap

In terms of sheer volume, China heads
the league table for plastic waste,
generating some 61 million tonnes of
plastic waste in 2019, according to the
latest Statista market data. The run-
ner-up is the US with 34.5 million
tonnes. However, while China gener-
ates nearly twice as much waste as the
US, the country ranks well below
America when comparing per capita
figures.
The next three in the top five are
Indonesia (9.6 million tonnes), Japan

lots of Bottles
An encouraging statistic, according to
Plastics Recyclers Europe, is that the
quantity of postconsumer plastic
packaging waste sent for recycling has
increased by 92% since 2006.
The recycling rate of polyethylene
terephthalate (PET) plastic bottles in
Norway has reached 97%, making it
the world leader. Even so, the recy-

cling of PET bottles – the most com-
monly recycled plastic item – hovers
around 30% in most developed coun-
tries.
Since the arrival of Covid-19, even
drinks bottles made with recycled plas-
tic have become less viable. The recy-
cled raw materials are 83-93% more
expensive than virgin plastic, according
to analysts at the Independent
Commodity Intelligence Services.
This year, plastic recyclers report their
businesses have shrunk, by more than