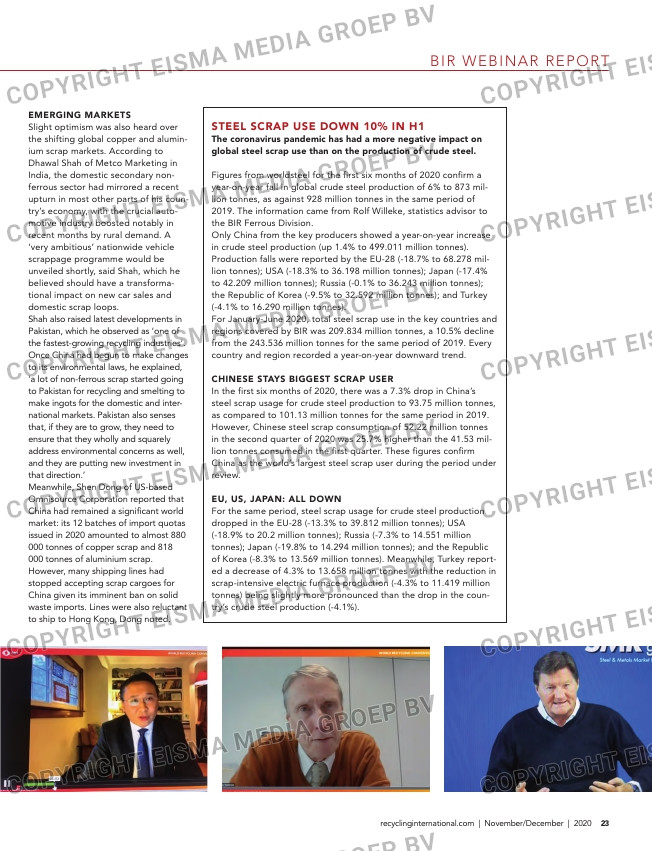 Recyclers, keep it up!
EMERGING MARKETS
Slight optimism was also heard over
the shifting global copper and alumin-
ium scrap markets. According to
Dhawal Shah of Metco Marketing in
India, the domestic secondary non-
ferrous sector had mirrored a recent
upturn in most other parts of his coun-
try’s economy, with the crucial auto-
motive industry boosted notably in
recent months by rural demand. A
‘very ambitious’ nationwide vehicle
scrappage programme would be
unveiled shortly, said Shah, which he
believed should have a transforma-
tional impact on new car sales and
domestic scrap loops.
Shah also raised latest developments in
Pakistan, which he observed as ‘one of
the fastest-growing recycling industries’.
Once China had begun to make changes
to its environmental laws, he explained,
‘a lot of non-ferrous scrap started going
to Pakistan for recycling and smelting to
make ingots for the domestic and inter-
national markets. Pakistan also senses
that, if they are to grow, they need to
ensure that they wholly and squarely
address environmental concerns as well,
and they are putting new investment in
that direction.’
Meanwhile, Shen Dong of US-based
Omnisource Corporation reported that
China had remained a significant world
market: its 12 batches of import quotas
issued in 2020 amounted to almost 880
000 tonnes of copper scrap and 818
000 tonnes of aluminium scrap.
However, many shipping lines had
stopped accepting scrap cargoes for
China given its imminent ban on solid
waste imports. Lines were also reluctant
to ship to Hong Kong, Dong noted.

STEEL SCRAp USE DOWN 10% IN H1
The coronavirus pandemic has had a more negative impact on
global steel scrap use than on the production of crude steel.

CHINESE STAYS BIGGEST SCRAp USER
In the first six months of 2020, there was a 7.3% drop in China’s
steel scrap usage for crude steel production to 93.75 million tonnes,
as compared to 101.13 million tonnes for the same period in 2019.
However, Chinese steel scrap consumption of 52.22 million tonnes
in the second quarter of 2020 was 25.7% higher than the 41.53 mil-
lion tonnes consumed in the first quarter. These figures confirm
China as the world’s largest steel scrap user during the period under
review.